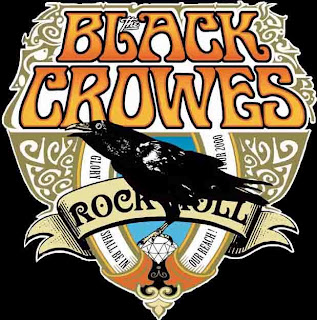 Celebrating the 100th post on this still very young blog, I can think of no finer band than The Black Crowes.

Back on the 26th July, I put up the full concert from the 19th March 2006 at London's Shepherd's Bush Empire.

The following evening (yep - I make that the 20th) they played a second concert, and here is where you start to learn just how cool, unique, talented, and other thingies the Black Crowes are.

If you are not a fan at the end of both, do the following. Go and stand in front of a full length mirror, look yourself up and down (no touching) and say out loud, "I am not a rock'n'roller".

There is no known cure for this condition, however a quick dose of James Blunt, or five minutes in front of MTV (sorry it needs to be switched on), may cause sufficient reaction to try again.

I am sitting on (OK - not literally) eight Cd's of live Black Crowes covers, of other artists material going way back in time, along with a lot of other studio and live performance nuggets, so be patient, I will start to work my way through these soon for sharing.

Remember The Black Crowes have always been pretty cool about boots, so please think about the official stuff as well.

(Edit 01/Aug/2010 - I must have been in a bit of a flippent mood to say the least,  when I originally posted this, still the Crowes are one fine live band and I will try and get round to sharing some more).

Reloaded 20/May/2015 - download link in comments.
The Black Crowes

Anonymous said…
Sounds like a great show and would love to hear more Crowes - but one question - why such a low bitrate?
4 October 2007 at 11:16

Anonymous said…
I love it, get your ears checked, thankyou beehive, more please especially the covers, cant ever get enough
4 October 2007 at 23:24

Beehive Candy said…
SORRY TWO OF YOU ARE NOT HAPPY, IT WAS AFTER ALL A FREEBIE, (I GOT IT FREE, I PASSED IT ON FREE) GUESS YOU ARE JUST HARD TO PLEASE, SO FEEL FREE NOT TO CALL BACK AGAIN.

THANY YOU FOR ALL THE POSITIVE EMAILS RECEIVED, YEP MORE TO COME, EVEN IF THE BITRATE IS NOT GOOD ENOUGH FOR PEOPLE WITH FLAPPY EARS.

Camarillo Brillo said…
It's free for Chrissakes!
Thanks to you I have a renewed interest in the Blacl Crowes!
Jim
10 October 2007 at 13:26

Anonymous said…
Thanks for part 2, the others give an error when trying to download.

Bradley Burlingame said…
I'm personally torn about posts like these. On one hand, thanks for taking the time to post them. BC are a great band, and well worth sharing.

I have to question the shite bit rate, though. Just brings up the question of whether it's just great to share, or whether, at the end of the day, it's the music that matters.

And if the music is not clear, muddled in low bit rate compression, then what's the point really? Not being a dick, just saying...

Regardless, thank you for UL'ing these, I would just ask you to consider some bare minimum (160) bit rates, or, well, don't bother.

Any chance of a re-post?

Rocker59 said…
Low bitrate is much better than no bitrate. I'm sure appreciative of the chance to hear a Black Crowes show that I otherwise may never have. Thanks Beehive!
20 September 2010 at 10:38

Anonymous said…
Man, the Black Crowes represent to me the last true Rock & Roll Band, the best Disciples of the R&R Hard Rock Blues Masters, EVERY pseudo artist of nowadays crap music must bent 1000.000 times over and over to learn some music the real deal.. Beehive, you deserve a non cursed Diamonds 4 diz...Thanx Man!..I really and mean REALLY appreciated.
2 March 2011 at 11:35

Anonymous said…
Hi ! Thanks for your wonderful Crowes shows ! Nevermind the bitrate.
Any chance we'll get to download the cover CDs you mentioned some time ago?
9 June 2011 at 16:47

Nice one mate! I was living in London at the time and couldn't go because we were saving up for the Download Festival! This will be a nice addition to my collection.