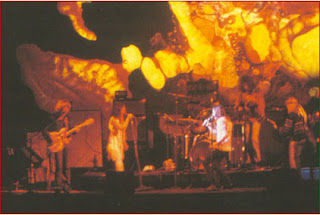 Am I glad I was just a minor in 1967. The whole hippie, summer of love, flowers in your hair, psychedelic thing would surely have sucked me in.

These day's, I'd be recounting tales of just how 'far out' I really was, in that boring monotonous way that only old stoners can. Hmmm maybe...

This is another moment in rock music history.

First of all the venue, the 'Cafe Au Go Go'.

The Cafe au Go Go was a Greenwich Village night club located in the basement of 152 Bleecker Street, New York, NY. The club was the first New York venue for the Grateful Dead, and has a veritable whose who, of 1960's artists that played there.

Jefferson Airplane performed for two weeks at the Cafe au Go-Go, with supporting act Richie Havens, from February 1967. This recording was from 4th March 1967.

As far as the Jefferson Airplane go, they had formed in 1965, in San Francisco, with their debut show on August 13th 1965, at the Matrix nightclub (San Francisco).

Vocalist Grace Slick joined in October 1966, and when this bootleg was recorded, they were playing some material from the second album 'Surrealistic Pillow', which charted at number three in June 1967.

The source was the venue soundboard - and the recording is very good, the performance pure 1967.

You can buy some Jefferson Airplane memorabilia HERE.

Anonymous said…
Thanks for the share - I was only 5 at the time but my folks were into this stuff so I grew up with it..

Nowt wrong with being a stoner. ;-)

Anonymous said…
Part 1 is great, part 2 does not exist anymore, a pity.

Anonymous said…
This comment has been removed by a blog administrator.
8 March 2008 at 16:24