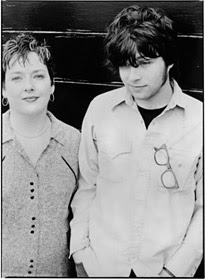 Whiskeytown only released three albums, and yet they are often cited as one of the key elements in the development of the alternative country rock scene or 'Americana' during the 1990's.

Ryan Adams and Caitlin Cary were the only two members of Whiskeytown to see the whole adventure through, indeed Ryan Adams had a reputation of being difficult to work with during the bands history, and therefore the overall turnover of members was quite high.

Formed in Raleigh, North Carolina in 1994, the bands first album was released in 1996.

Describing this era the entry in Wikipedia states:

Faithless Street, released on Mood Food Records in 1996, established the band as one of the genre's leaders, thanks to glowing reviews in publications such as No Depression, and helped the band score a major-label record deal with the Geffen Records imprint Outpost.

Faithless was re-released on the imprint in 1998 with nearly a dozen bonus tracks from the era, some of which are new, and others of which showed up on Stranger's Almanac, Rural Free Delivery, and other early EPs in different versions. One track, "Oklahoma," was removed. Adams claimed that the reason for the re-release was the muddy sound of the original version and his distaste for "Oklahoma," which was added to the album despite his objections.

The liner notes to the re-release provide some insight to the band's dynamic at the time, referring to the lineup as "this version of Whiskeytown" and featuring a quote from Adams regarding the 1995 recording sessions: "In retrospect, I knew that was the last optimism I was gonna have for a long time."

All of which makes this particular recording poignant.

Recorded 'relatively' close to the bands hometown of Raleigh North Carolina, at Cats Cradle a highly established venue at 300 East Main Street, Carrboro, North Carolina, USA, this is a fascinating concert before their debut album was released.

It also captures the band in their early stages of development and comfortable to play a few diverse cover songs along with their own material.

The band line up is:

The sound quality is exceptional, it is most likely a direct stereo soundboard copy.

THE REPLACEMENT DOWNLOAD LINK IS AVAILABLE IN COMMENTS BELOW (3rd September 2009).

Anonymous said…
REPLACEMENT LINK (COPY AND PASTE TO WEB BROWSER) IS AS FOLLOWS: