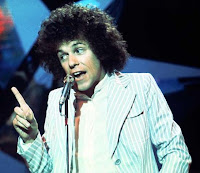 This is singer songwriter Leo Sayer live at Pauls Mall in Boston on March 9th 1975.

Leo's debut album 'Silverbird' was released in 1973 and was one of my favorite albums from that year, indeed I still give it a listen from time to time. Four songs from the album are performed within this concert. By the time of this concert Leo had enjoyed a number of hits and had gained a good following both in the UK and the USA.

For me personally his musical direction after Silverbird was a little to 'single hits' orientated, however his positive and upbeat style gives all his songs a lift when performed live, and after all who can blame him from exploiting his chart success.

Leo Sayer has had success worldwide with his single and album releases, particularly in Britain and the United States He was initially discovered by David Courtney, who then co-managed him with the singer turned manager, Adam Faith. Leo Sayer began his music career co-writing songs with David Courtney, including "Giving It All Away", which gave Roger Daltrey of The Who his first hit without The Who in 1973.

That same year, Sayer began his career as a recording artist. At the time of his initial chart breakthrough in the UK, with his second single "The Show Must Go On", he wore a pierrot style outfit and make-up and the song shot up to number two. It might have been difficult to throw off the clown's image, which like Gilbert O'Sullivan's short trousers and pudding basin haircut was fine for attracting public attention but not much good for sustaining a musical career.  However, Sayer followed up hit after hit. (His first single, "Why Is Everybody Going Home?" b/w Quicksand" was not a hit).

In 1977, he had a U.S. number one with "You Make Me Feel Like Dancing" (a Grammy Award winner for the year's best Rhythm and Blues Song), as well as the romantic ballad, "When I Need You" (1977), which reached number one in both the UK and U.S. Written by Albert Hammond and Carole Bayer Sager, it was Sayer's first UK chart-topper (after three number two hits) and his second successive U.S. number one. It was also the first of two UK chart-toppers in a row for producer Richard Perry.