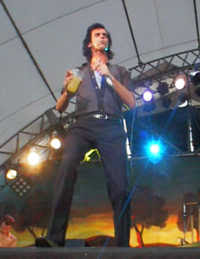 This is Nick Cave and the Bad Seeds performing at Fuji Rock in Tokyo back on the 2nd August 1998.

This is a resonably well circulated recording of the show and is missing Brompton Oratory and possibly Whiskey Rye from the concert although there remains some confusion if the latter was performed on this occasion.

Sound quality is good and Nick Cave comes across in an upbeat mood somewhat teasing the audience on a couple of occasion. The set list reads as a 'Best Of' up to this point in the bands history.

In 1990, the band collectively eliminated hard drugs from its diet, relocated to Brazil, and released The Good Son, Kid Congo Powers' final collaboration with the band. Their next record, 1992's Henry's Dream, was the first to feature current members Martyn Casey and Conway Savage. Following it came 1994's Let Love In.

In 1996, Nick Cave and the Bad Seeds released Murder Ballads. It includes "Henry Lee," a duet with British rock singer PJ Harvey (with whom Cave had a brief relationship), and "Where the Wild Roses Grow," a duet with Australian pop idol Kylie Minogue. The latter was a mainstream hit in the UK and in Australia, winning three ARIA Awards including "Song of the Year." Australian violinist Warren Ellis began working with the band at this time, and would play an increasingly significant creative role in the band's output in coming years. American drummer Jim Sclavunos also joined the group.

Their next album, The Boatman's Call (1997), is marked by a radical shift away from archetypal and violent narratives to biographical and confessional songs about his relationships with Carneiro and Harvey. Nick Cave then took a short break to rehabilitate from his 20 years of heroin and alcohol abuse, during which time he got married.

Nick Cave and The Bad Seeds