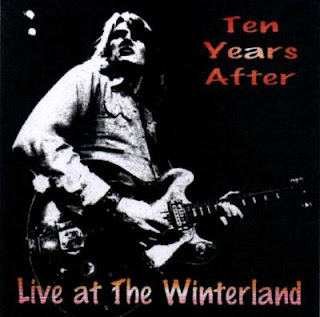 I was first introduced to Ten Years After through their third album Stonedhenge way back in 1969. Although the album itself was quite experimental for some reason it 'registered' with me and their following four albums became firm favorites of mine and still get an airing from time to time these days.

Ten Years After may have reached a wider audience as a result of Woodstock, however one way or another they would have broken through with their explosive mixture of rock'n'roll, blues and exceptional musicianship.

This is Ten Years After live at the Winterland, San Francisco, California back on the 30th April 1971.

Alvin Lee may have been the photographers favorite and his guitar playing is astonishing however TYA were always a band and listening to this concert I am reminded of just how much each member contributed to the overall mixtures of styles and creativity. There is even a drum solo (what would a rock gig in the early seventies have been without the obligatory drum solo and a tiny bit of self indulgence by each band member).

This recording is another one that has 'escaped' from Wolfgang's Vault where you can go and listen to this and so many other fabulous concerts for free and stream them if you prefer not to download this copy.

Quoting from Wolfgang's Vault 'Shortly after recording this show, the band would leave Decca Records, the label who had signed them in 1967, and move to Columbia's corporate home. Columbia would take the band in a more radio friendly/pop driven direction (hence, the hit single "I'd Love To Change The World"). Frustrated with the popular music trend, Alvin Lee left the band, which disbanded soon after the second Columbia release in 1974'.


Download links (two) in comments below.
Ten Years After