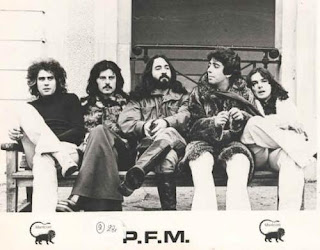 This is another audience recording that is featured on Beehive Candy as it is something of a collectors item for fans of the band and also because there is a story to go with this performance.

Premiata Forneria Marconi (PFM) (translates - Award-winning Marconi Bakery) were the first Italian group to have notable success abroad, entering both the British and American charts. Between 1973 and 1977 they released five albums with English lyrics. They also had several successful European and American tours.

PFM introduced new sounds, such as the synthesizer, to the Italian musical world. They were also among the first to combine symphonic classical and traditional Italian musical influences in a rock music context. Such innovations and their longevity have made them among the most important bands in the international Progressive rock genre.

This is PFM live at the thirteenth Reading Festival back on Sunday 26th August 1973. By the time PFM took the stage in the afternoon the band schedule was already running quite late and a further nine acts including Spencer Davis and headliners Genesis were still due to perform. Because of their Photos of Ghosts album success the band were proving very popular with the audience who were clearly wanting the band to play their full allotted set. The band started to play La Carrozza di Hans despite the organisers wanting them to come off stage (if you listen carefully you can hear someone angrily shouting at them from the side of the stage at one point). Without further warning the stage power was cut off in desperation to end the set however the drummer clearly was not finished and just played on.

PFM came to the attention of Greg Lake of Emerson, Lake & Palmer while ELP was on an Italian tour and PFM were signed to Manticore Records. The first album on Manticore, Photos of Ghosts was released all across Europe, Japan, and North America and was first time an Italian rock band found success in foreign markets. It was also one of the first recordings by a European rock group to have chart success in the USA, peaking at number 180 on the Billboard 200 albums chart in November 1973.