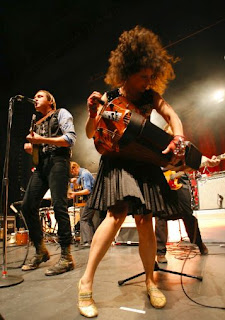 Reloaded 10/May/2015 - This is Arcade Fire in concert at the I-Day Festival in Bologna, Italy, back on the 2nd September 2010. The tour in support of the release of The Suburbs album was in my opinion their best yet and musically this is a very good example. However be warned, a rather annoying Italian DJ pops up on occasion practicing his skills (or inflating his ego even further) as this concert was broadcast live on FM and this recording sourced from that broadcast.

From wikipedia regarding recent events for the band - On January 13, 2011 it was announced that Arcade Fire would perform at the 53rd Grammy Awards in February 2011. The band was nominated for Grammy Awards in three categories: Album of the Year, Best Rock Performance by a Duo or Group with Vocal, and Best Alternative Music Album (for The Suburbs). Out of the three nominations, they won the award for Album of the Year.

On April 19, 2011 it was announced that Arcade Fire will release a deluxe edition of their album The Suburbs featuring the short film Scenes from the Suburbs, by director Spike Jonze, as well as two new tracks, "Culture War" and "Speaking in Tongues" featuring David Byrne. Scenes from the Suburbs, which debuted at the Berlin International Film Festival 2011, has a running time of 30 minutes. The film screened at the SXSW Film Festival 2011 and saw its online premiere on MUBI on June 27, 2011. Writing for the Canadian Press, Nick Patch called the film "a sci-fi puzzler that seems to blend the paranoia of Terry Gilliam films with the nostalgia of classic Steven Spielberg flicks."