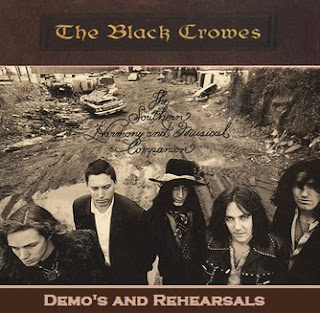 This is The Black Crowes during the making of their second album 'The Southern Harmony and Musical Companion' with some of the tracks close to the final album release versions and a few at an earlier stage. The Black Crowes remain one of my all time favorite live bands and their studio offerings have never disappointed.On three of these songs I had to go back to the official release to check for any differences, there are, but not that much. The Southern Harmony and Musical Companion is the second album by the The Black Crowes, released on May 12th, 1992. It was the first record by the band to feature Marc Ford on lead guitar, replacing Jeff Cease, who left the year before. It features four hit singles; "Remedy" ( number 1 on the Album Rock Tracks chart for 11 weeks), "Thorn in My Pride" (number 1 on the Album Rock Tracks chart for four weeks), "Sting Me" (number 1 on the Album Rock Tracks chart for two weeks), and "Hotel Illness"
5 comments
Read more

Lets start 2011 with some Madness , as the reality of the year ahead ain't necessarily gonna be so much fun if the doom and gloom from our illustrious politicians (here in the UK) is anything to go by. This is a wonderful concert recording from the Pinkpop festival held at Landgraaf, The Netherlands, this actual performance was on 31st May 2009, and broadcast on FM. The then new album, entitled The Liberty of Norton Folgate was released just a week or so earlier, on 18th May 2009. It charted at Number 5 in the UK album charts. The band went on to play various festivals, including Pinkpop and Glastonbury. On 27th September 2009, the band also played a free concert on a closed-off Regent Street in association with Absolute Radio. The band have continued to both record new material and tour in recent times, and a new album is due later on this year, which following the critical acclaim of the last one and the sheer pleasure of listening or seeing them live, gives many of us some
1 comment
Read more
More posts