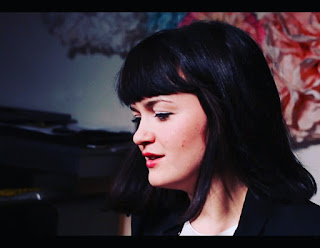 Background promo - As young as she may look, Laura Jean Anderson is filled with the spirit of wisdom, amassed through years of travelling, busking, hitchhiking, touring and old time religion--just the kind of learning a prolific songwriter would need.

You can hear it in her voice and lyrics on her latest EP, Righteous Girl in which she evokes the ghosts of Janis Joplin and modern influences of Lucius, St. Vincent and Alabama Shakes, “I feel like these songs reflect that feeling you get when you get one glimmer of hope, of sunshine in the midst of a deep depression. I would go on long walks barefoot with my guitar in the neighbourhoods of LA--I felt super out of place doing that but for some reason, it put things into perspective,” Anderson says wistful.

“Take Me In” opens up the EP and Anderson gently pulls the listener into her world, her soothing voice (reminiscent of June Carter) ebbs and flows along with the electric piano rolls. However, the title track “Righteous Girl,” is a whole ‘nother beast. Crashing distorted drums clue us to a shift in tone but Anderson’s voice and guitar are there to ground the whole affair: Her haunting voice swells then dips back into a lullaby then before we know it, she belts out another howl--she's always in control, it seems to say.

Anderson’s unique sound is a direct creation of the combination of growing up in a conservative environment with years of church singing and roots music education contradicting the grunge and punk elements of growing up in liberal Washington. You can hear this in her music, soulful vocals and well crafted story lines with elements of chaotic rock n' roll and garage rock at its best. Then a stint in the mountain town of Huaraz, Peru where, with all her money stolen, she spent hours a day busking in the plaza until she made enough money to get a ticket home. “It was then and there that I realised I was put on this earth to make music,” Anderson says. “Alone in Peru, I was able to make it out just through music . . . I knew I had to come back to the States and pursue music full-heartedly.”

So she did. She went back to LA to finish school and record “Righteous Girl.” The EP was produced by Anderson and Theo Karon and recorded mostly at Kingsize Soundlabs in Eagle Rock.

'It Won't Be Long' is the single release from the new four track EP. It gives a good taste of what is a fine collection of songs. Mixing her soulful voice with more edgy garage rock moments seems to work without to much effort. I get the feeling Laura Jean does indeed have a little of the Janis Joplin in her musically, so who can be quite certain what gems might follow.