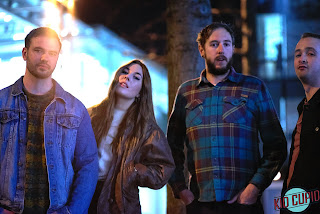 Background promo - After joining forces only a year ago and already being compared to huge acts including London Grammar and Young Galaxy, the London-based indie-electro quartet Kid Cupid are definitely ones to watch in 2016.

Their upcoming new single Siren is the perfect introduction to what’s yet to come. Filled with backing harmonies highlighting the importance of the lyrics and topped with Laura’s incredible vocal delivery instantly draws comparisons to Chvrches’ Lauren Mayberry.

Produced by the band themselves, the track ticks all the right boxes from start to finish. It consist of attention-grabbing lyrics, flowing real-world analogies as well as plenty of space for the listener’s diy interpretation. Their clever use of a broader range of instruments such as the snare drums to add the captivating rolling and additional tribal drum patterns resemble the likes of Jungle as well as Bastille’s hit Pompeii. Siren is the lead track taken from their forth-coming EP, and it will be available for sale and download everywhere 3rd June 2016.

There's a couple of comparisons in the promo above, both have some credibility. Kid Cupid are not however clones, and a reasonably distinct and attractive sound emerges with the song 'Siren'. With a solid beat and rich background vocals, Laura glides above and hints at what is still to come from the bands eagerly awaited EP. 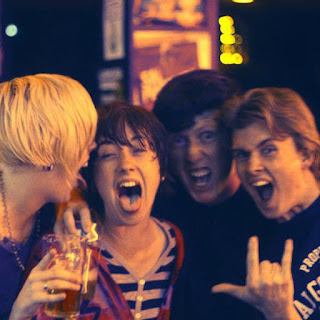 The Aves - We Were Young.

Background promo - Adelaide's favourite garage kids The Aves have lifted a new single 'We Were Young', a definite highlight from their cracking debut album 'Good News'. Vocalist/guitarist Lucy Campbell says of the track, "For a long time this one was called 'Complicated Chords', because the structure took so long for us to get – the chorus never repeats itself. In the studio we faffed about with it for a long time just to get that rhythm right. The guitar solo had nine takes and Thomas’ hands blistered so much he had to stick them in methylated spirits between takes. Lyrically We Were Young takes cues from Bruce Springsteen, it’s a nostalgic, bitter sweet call back to when I was a teenager. In a lot of ways The Aves have grown up together and this song epitomises all of that energy for me."

With three impressive EP's, a Big Day Out slot thanks to triple j and a stack of touring under their belts that includes Canada's NXNE Festival, New York's River Rocks and Brisbane's Bigsound, The Aves have become known for their high energy live shows, infectious pop-smarts and tongue in cheek lyrics. Initially taking cues from a varied range of the greats like Talking Heads, Elvis Costello, The Kinks and Yeah Yeah Yeahs, 'Good News' is an album that's both energetic and textured - an ode to Adelaide, Hollywood and suburban dreams. 'Good News' is out now through all good digital retailers via Firestarter Distribution and via the band on CD.

How time flies, it was just over five months ago that we featured The Aves for the first time and after a few positive words finished with "more please", so thank you! If anything the band have an even stronger song with 'We Were Young', which besides being extremely catchy, demonstrates a more developed sound, all of which makes the album a must have. 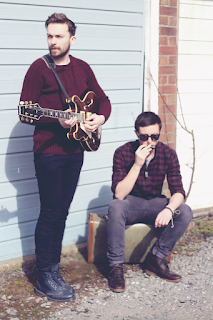 Background bio - Winter 1982 are Phil Barber (vocals, guitar) and Luke Phillips (piano, bass) from Birmingham. Trampled by their increasingly grey and relentless nine to five existence, they wanted to make music that spoke about their existence, sometimes beautiful, other times desperate and depressing, both knew their experiences could be drawn upon to create haunting alternative folk...

Phil says "I have always written music, making little acoustic songs and recording them, very roughly. We are a duo so once I have something I like I send it to Luke. If he likes it too we work on it together, building in piano, bass, drums etc. We like songs....or maybe are just compelled to write songs....about life, love, hurt, doubt, mistrust. Basically what it is to be flawed human beings fumbling through life. I think everyone is continuously falling in and out of love, feeling great, hurt, happy, depressed, haunted and we are all trying to deal with that - sometimes privately -  the songs tend to be about those very human experiences. I've always loved soulful music that can be as dark as it is beautiful."

The duo, who have drawn comparisons to Ray Lamontagne and Ben Howard, have had support from both Amazing Radio and BBC Introducing.

Winter1982 are releasing 'Worry' on the 13th May, it's a beautiful song that unfortunately, I cannot feature here at the moment. Having been so impressed by the track, I pretty much wanted to share something, and the song 'Friend' makes for an excellent substitute. The duo create an expansive sound, laden with well crafted music and vocals, and creative song writing. 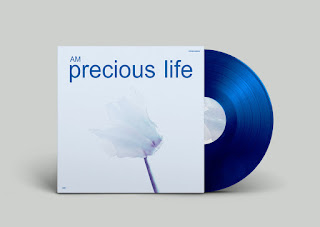 Background promo - "Precious Life", produced with drummer Joey Waronker (Beck, Yeasayer, Atoms For Peace), is the new single from Los Angeles songwriter AM, with the album of the same name following on May 20. Returning from an ultra prolific period with electro-soul partner Shawn Lee (Shawn Lee’s Ping Pong Orchestra), AM summons a dreamy sound on his new solo outing. With Waronker behind the drums and the board and with AM doing just about everything else on synths, bass, and guitar, the two carefully craft a record that is honest and emotional, yet swings and pulses.

When Joey's name was mentioned as a possible producer I thought 'how crazy would it be to work with one of my favourite drummers'...his work on Beck's "Mutations" and "Sea Change" were a huge influence and still remain some of the best drumming on record to date.  The first day we hooked up we banged out "The World Will Go On Without You", the last track on the record.  It was so effortless and fluent...with me on the bass and Joey on drums...I think we had the whole track done by the end of the day.  I think we both new then we had to make a record together."

The first single "Precious Life" delivers a bare, soulful guitar driven track rotating the question, “Who are you, with your precious life?” which openly critiques social class hierarchies of this time. Music made for the headphones...the big ones that is. Album available in stores on May 20, 2016 on Limited Edition blue vinyl and CD.

This is a really fine song. 'Precious Life' has a classic soul feel to it, and has been produced with care and attention. Musically it's crisp and precise with enough funk and feeling to complement the dreamy soulful vocals, the album sounds very promising.