Quality Not Quantity: The Goldhearts - Me & Mark 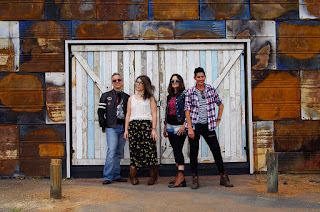 The Goldhearts - Rise And Fall.

Background promo - If it not for Kenny Rogers advice to bass players to write and sing their own songs, this catchy album of grunge, hooks, harmonies, and twang may never have seen the light of day. With a batch of original songs in hand, Bass Player/Songwriter Margy Joughin (Dream Poppies) gambled on the wisdom of Kenny Rogers, sage to all bass players. Intending to record a few songs, producer Govinda Doyle (Big Jet Plane) gently coaxed Margy across the line from backing to lead vocalist to accidentally record an album. The Goldhearts came to life with with ex-Brisbane mates Tracey Kick, (Dream Poppies) Claire Harris (Razel, Dream Poppies, Godnose, The Shortfall) and Daren Williams (Haba Dudes, Secret Assasins).

The Goldhearts’ debut album, “The Rise and Fall of the Goldhearts” draws inspiration from the female led indie bands of the 90’s, and the melodic traditions of Australian music. The album is tweaked with twang and leaves a tasty grunge hangover. Be warned, legendary DJ, Rodney Bingenheimer on KROQ in LA, won't play those catchy Goldhearts tunes last in his set for long, as they keep him awake at night.

The Goldhearts have been playing for a year and have released 2 singles through The A&R Department, quirky alt-country swagger “On the Run” in April 2015 and straight ahead indie pop/rock infector “Here’s the Thing” in November 2015. Both songs received national and international attention. Reviews and references have been made to PJ Harvey, The Kills, Nirvana, The Breeders, Garbage and The SuperJesus. Released in conjunction with the Album is next single “Rise and Fall”, a sweet anthem of redemption and triumph for the broken, broken hearted or broken up.

Internationally, The Goldhearts’ two digital singles have caught the attention of LA's KROQ being featured regularly on the famous program,Rodney on the ROQ. “On the Run” charted at 20 in the USA Submodern Charts. “Here’s the Thing” earned spins in Tokyo and Spain, charting in Lima, Peru, and the Netherlands. Nationally the band has received regular airplay on community radio, including 4ZZZ, SYN Radio, InnerFm, Coast Fm, Harvey Community Radio (Track of the Week), 2SER, FBi, and Radio Adelaide.

We featured The Goldhearts back in November last year and were impressed on hearing just one song. Fast forward to now and we were right to be so. The debut album “The Rise and Fall of the Goldhearts” from which the featured song 'Rise And Fall' is just one of thirteen tracks, is a real good collection of hooky, guitar driven music, and spot on vocals throughout. 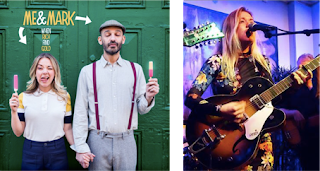 Backgrond promo - Mia & Mark have a wide range of experiences in music and have grasped a new sound they call "story-pop". All the songs are written by Mia and the stories she tells are all based in real experiences.

Mia is an amazing talent. Energy to spare and a voice that can only be described as "generational" . She captures your attention with her voice but it is the delicate songwriting that keeps you mesmerised. With experience on the stage, both musically and theatrically, since the age of 5, Mia brings a veteran's poise to everything they do.

Mark Axiak has collaborated with some of the worlds best producers, artists and institutions, including touring the world with world famous bands as a bass guitarist. He also works as a producer at Urban Sound and is looked up on as one of the finest engineers in his field.

This is one fine song. 'When Rich Find Gold' is described by the band as story-pop, which makes sense and adds additional interest to their music. It has all the vital ingredients, melody, hooks, superb vocals and tight exciting music. Another description might be pop music with heart, soul and intelligence.