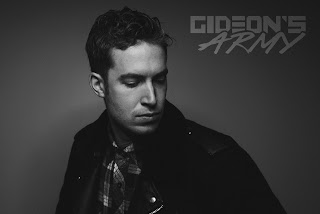 Background bio - Formed at the nexus of New York and New Jersey, Gideon’s Army is a Classic American rock band. They combine the heartfelt storytelling of R&B, folk, soul, and country, with the foot-tapping and heart-pounding uplift of Rock and Roll. On their debut LP Burn for the Living, Singer/Songwriter/Guitarist Robert Bray weaves stories of adventure, love, heart-ache, desperation, defiance, redemption, rebellion, and longing.

Gideon’s Army was founded by singer/songwriter/guitarist Robert Bray. Born in New York City to an Irish Catholic father and a Jewish mother, Robert grew up predominately with his mom in Tenafly, New Jersey, spending weekends and holidays with his father in Queens, NY. Robert’s first musical experiences were playing the violin for the Stillman elementary school orchestra and town-select Super Orchestra. He picked up a guitar for the first time in the 7th grade, at 12, but his youth was spent devoted primarily to athletics. Competing in baseball, basketball, ice hockey, soccer, and track and field, Robert eventually accepted a scholarship to play baseball for Division II Eckerd College in Florida’s Sunshine State Conference.

It was at Eckerd that Robert took his first acting class and began a torrid and on-going relationship with the performing arts. Robert left Eckerd in the middle of his junior year to move to NYC to pursue a career as an actor. He graduated from the prestigious Actor’s Center Professional Conservatory and spent several years working in film and in NYC’s downtown theatre scene. It was during this time that he picked up the guitar again and began to build skill and get creative with the instrument. At a certain point in his development, songs started to come at a furious pace and Robert knew that he had found his life’s calling.