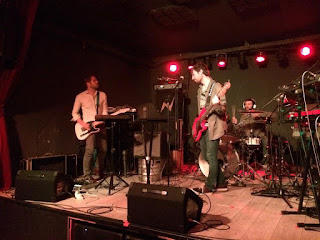 Background promo - Two years after releasing 'Best-Selling Dreams' to wide acclaim around the world, Novanta will soon release his new album 'Hello We’re Not Enemies' on Seashell Records. The first single from this release is 'Goðafoss'.

Novanta is Manfredi Lamartina, a musician who is originally from Palermo but has been based in Milan for many years now. On this album, Novanta further evolves his sound, falling effortlessly between shoegaze, post-rock and electronica. This release underlines the importance of empathy as its core idea. In a period where human relationships are often based on aggression and on the division between “us” and “them”, here we find that we’re not enemies. This album is also an expression of love towards Iceland, a country where Manfredi Lamartina spent some time traveling last year.

"Goðafoss is about a man who wants to be a god, shaking the world and erasing all the evil. But mankind is indifferent to everything: love, compassion, empathy. 'Hello We’re Not Enemies' is about empathy: we are living in a world where all men are involved in an absurd battle against each other," explains Manfredi Lamartina. "Iceland seems a little piece of paradise, with breathtaking landscapes and a general feeling of wonder. I went to Iceland last year and I really fell in love with that country. “Hello We’re Not Enemies” is deeply influenced by Iceland, which is why the album will be out on June 17th, Icelandic National Day."

"Hello We're Not Enemies" is due for release on June 17 and will be available in digital download and limited edition cassette via Seashell Records' Bandcamp site. The full album will be exclusively streamed via OndaRock on June 13.

'Goðafoss' is the first single and the second track on the forthcoming "Hello We're Not Enemies" release, a collection of seven songs. This is a good and varied collection of material, the differing collaborations perhaps driving the variety of directions taken. The featured track does however provide a good indication of the quality that is found across the album. 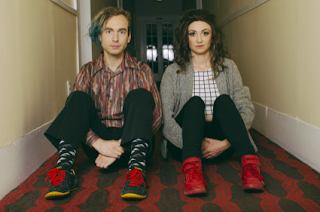 Background promo - As Oakland, California artists Introflirt gear up for the release of their second album ‘Temporary Heaven’, they are teasing their first single ‘Frozen Lace’. Introflirt are Vafa, Ben Benjamin, and Brendan Dreaper.

This album represents the next stage of evolution in their self-described “croonwave” music. Dissolving notions of what electronic music should be into a colorful flurry that pops and sparkles, this albumis threaded together by a velvet voice and candid lyrics that touch on themes of disappointment in people, the fragility of relationships, and the path towards sexual liberation. True to Introflirt form, the songs on ‘Temporary Heaven’ maintain a delicate balance, offering the soundtrack to a life that is introverted while still reaching out.

The album’s first single ‘Frozen Lace’ was inspired by the struggle to overcome sexual repression, which generally goes hand in hand with some religions. It’s buzzing bass and squirming synth represent a tug-of-war between satisfying desires and fearing the potential consequences. Inspired by the concept that deciding between gratification or holding back entails excruciating self-torment, ‘Frozen Lace’ picks up on the lingering trepidation that moral laws often produce.

This was the first song to emerge for Introflirt after releasing their debut album. “This came from the longing to rid myself of guilt and fear of consequences when approaching certain desires,” explains vocalist and lyricist Ben Benjamin. “Growing up in a religious family - although my parents have pretty much been kicked out of every church they ever attended - installed many programs I’ve worked hard to disassemble.”

While Introflirt’s self-titled debut album documented the group testing the Flirty waters, the eight-track ‘Temporary Heaven’ jumps in without inhibition. The album retains the raw, gritty synth pop that endeared so many listeners to their debut release - but adds a seedier, darker, more danceable attitude, taking the Introflirt party from the rooftop to the basement. While ‘Temporary Heaven’ presents Introflirt with a more energetic, modern feel, what stands out most is the transformation of Ben Benjamin’s vocals. After spending countless weekends in piano bars performing jazz standards, Benjamin’s vocal presence enters a similar space inhabited by the lounge singers of the 40s, 50s, and 60s, but set in the hazy, dim light of dance club beats.

Reinventing pop song structures to reflect the unpredictable nature of life’s twists and turns, the songs on this album present a clarity and confidence that’s a little bit dark, a little bit sentimental, and very very flirty.

Live Dates
June 25 - Oakland, CA - Legionnaire Saloon (with ghostplay & VVerevvolf)
July 15 - Sacramento, CA - Ladyfest (with Pink Bandana & Spacewalker)
August 13 - Oakland, CA - Hanging Garden at The Night Light (with Neon Kross & Otzi)
September 28 - San Francisco, CA - Hemlock Tavern - (with Foreign Resort & Nite)
Rich with synth textures and with a rhythmic beat 'Frozen Lace' is enhanced even further by the dramatic vocals. The melody unfolds in a gradual manner as the song continues it's musical journey. And this really is but a taste of what's in store on the album, it's another case of like the single, then you'll love the album.