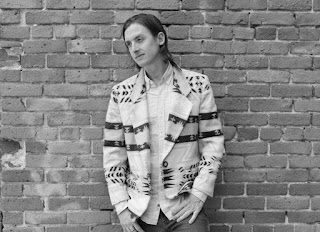 Background bio - Inspired by the quiet musings of troublesome love and the path to understanding, the emotionally evocative music of indie-folk singer-songwriter, Kyle Britton, epitomises storytelling in its truest fashion. Britton’s distinctive sound combines undeniable dark undertones with roving melodies and atmospheric refrains, offering a unique experience for his listeners.

“Riddle”, the first of two singles, is a song detailing the demise of a poisonous love affair and the enduring pain that follows. “Never able to accept love again, every man who she came across from then on was in for a world of pain and heartbreak”, confides Britton. As the song builds, the Belle Epoque-inspired strings render the listener to a melodic montage.

On “Villain”, Britton successfully demonstrates diversity as both a lyricist and performer. The dramatic self-confession, encapsulates its audience through the use of defiance against typical folk arrangements, opening us up to our ‘villainous’ side.

Perhaps it was growing up in a military family which led to Britton's desire for non-conformity and individuality. Britton expressed on his father's influence "I grew up with my dad telling me that if music is not evoking an emotional response it's not doing its job."  The EP is a demonstration of Britton’s continuous hard work towards his childhood dream. His natural dedication has led him from ‘fake-playing’ his 7-year-old rendition of Def Leppard’s ‘Pour some sugar on me’ to creating an EP that actively analyses his decisions in life, whilst convincing us to do the same. Riddle was released July 8th worldwide.

'Riddle' may be a song about (and we quote) "the demise of a poisonous love affair and the enduring pain that follows", it's also a very touching and beautiful song, that showcases the musical and vocal talent of Kyle Britton. It's also just one aspect of his songwriting and music on the four track EP, which I have to say is quite exceptional. 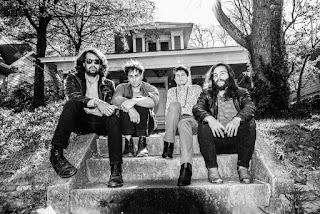 Background promo - Nevado Music is thrilled to welcome Atlanta, GA psych-rockers Gringo Star to their expanding label roster. Gringo Star will release The Sides And In Between on August 26. Gringo Star’s Nick Furglueles told Pure Volume, “‘Rotten' to me, is about not letting societal standards prevent you from doing or expressing how you want and not waiting till it's too late to do what you love.” He adds, “It's about an establishment designed to keep people in check, and dismantling that establishment.”

Gringo Star are insouciant explorers, tossing the paddles overboard and drifting on the currents of their lackadaisical curiosity across a rippling sonic ocean, out to the far edges of rock & roll. Shots pulsing from a vintage Leslie speaker, their guitars, keys and vocals create the psychoactive ingredients of their echo-slathered, doo-wop-indebted indie gems; psychedelic garage bangers, gritty R&B shuffles and spaghetti western weirdness. Taking cues from Santo & Johnny, The Stooges, Ritchie Valens, Marc Bolan, Percy Faith, Sam Cooke, the men working on the chain gang—uh! ah!—they’re all here, their electric ghosts reaching across time, tapping Gringo Star on the shoulder like the crossroads devil to Robert Johnson, bestowing secrets, passing torches.

If you know a little about brothers Nick and Peter Furgiueles’ roots, it all makes sense. “Our grandad started out in radio in the ’40s and ’50s in Columbus, GA.,” Nick explains. “He was a huge promoter of R&B back when it was still super segregated, and he was playing black music and putting on shows with Little Stevie Wonder, James Brown, Sam Cooke & the Soul Stirrers, a lot of Gospel shows. So we grew up hearing all these stories, listening to all this music. Our grandfather was inducted into the Georgia Music Hall of Fame posthumously. And my grandma—all her photo albums are like Jackie Wilson shirtless backstage, hanging out.” Not to mention how Nick and Peter used to raid their parents’ record collections, cutting their teeth on the likes of Buddy Holly, The Animals and The Kinks. “Our favorite music comes from the ’50s,” Peter says, “and that music influenced all the ’60s bands we like.”

The band has toured relentlessly across the U.S. and Europe building a diehard underground following while sharing bills with everyone from Cat Power and Feist to The Black Angels and Weezer, and also touring with Wavves, Best Coast, And You Will Know Us By The Trail of Dead and fellow Atlantans The Black Lips.

'Heading South' is but a flavour of Gringo Star. The band have a very distinctive sound that they take in many different directions. One consistent feature is the hooks within their songs, another is the difficulty in placing the band in any particular genre (which is a plus). The album is consistently appealing across all ten tracks and well worth checking out.