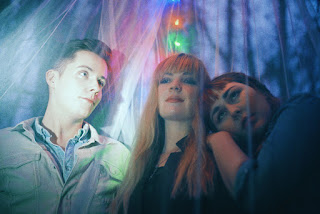 Background promo - Like the changing of the days in Belfast, Beauty Sleep’s new single is very much in a different season to the bands debut back in winter, suitably named ‘The Dark’. As the days are significantly longer right now, new single and sophomore effort ‘Living Right’ drives away from the melancholy tones and melodies of the bands debut effort whilst keeping the dreamy, chorus infused guitars and hazy vocals that are becoming a trademark for this Northern Irish export.

Ryan McGroarty, Cheylene Murphy and Aimee Williamson’s obsession with fuzzy synths and dream inspired pop music continues to show the bands ability to compete in the one of music’s newest trendsetting genres. ‘The Dark’ was described as “a mix of Phoenix and Beach House and occupies the dreamy end of the guitar-pop spectrum.”(The Irish Times) and won the support of a host of tastemaker press and BBC 1 Radio support. The tone was seemingly set for Beauty Sleep.

But if ‘The Dark’ was anything to go by, new single ‘Living Right’ is its nostalgic half-cousin and sets the tempo by jumping straight into a melodic upbeat chorus reminiscent of Washed Out, Teen Daze, and Summer Heart (see what I did there, Summer?). ‘Living Right’ is due for release in all the usual places on Friday 12h August 2016.

The over used term "lush" can be rightly "over used" for 'Living Right' the latest song from Beauty Sleep. It's also a reminder that indie and dream pop are two genres where bands are still creating original and exquisite music, this being a case in point. 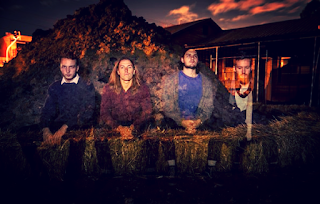 Background - Melbourne based prog-rock outfit Qlaye Face are pleased to announce the arrival of their EP ‘Nascence’. Comprised of four intricate and atmospheric tracks that feature complex time signatures and rhythmic ideas, the moody quartet's mission statement is to execute their craft with ambition, precision and integrity.

Conceived out of the friendship of four high school friends and evolving through countless hours of writing and practise, the band chose their surrounds of Melbourne to record at Sing Sing and Rangemaster Studios with acclaimed producer Dave Carr. Vocalist and guitarist Cameron Bobbitt says of the EP, "We wanted to push our creative boundaries and challenge whatever forms or conventions we held about music, while ultimately allowing the songs to grow organically from an emotional place. We came up with sounds, patterns and journeys we had never realised before."

"Lyrics were a direct reaction to the environments the songs were placing us in, perspectives and styles that I had not written within prior. I think through the lucidity and approach to the lyrics, they ended up exposing the honesty and personal relevance needed in the music in the right way. As a listener you should be challenging yourself and the status quo, straightforwardness wouldn't have done the record justice." No strangers to the progressive alt-rock scene in Australia, Qlaye Face have quickly chalked up support slots for Dream On Dreamer, Caligula’s Horse, Closure In Moscow, Voyager and Alithia. The band are set to get busy and hit stages across the country this Spring and Summer, starting with a string of EP launch shows. ‘Nascence’ was out Friday August 5 on CD and via all good digital retailers

We don't get to feature much new prog rock on Beehive Candy these days, however Qlaye Face and the excellent song 'Nascence', has helped to rectify that. In fairness this is pretty alternative and even folk who are turned off by the prog expression, might be pleasantly surprised.

Jacob Moore - From Above.

Background - Hailing from Sydney Australia, songwriter/producer Jacob Moore, who has been involved with a myriad of acts for a number of years, is finally ready to shine lighton his first solo musical presentation in 2016. Like a pleasant gust of wind on a hot day, Jacob Moore is drifting into the limelight with ‘From Above’, a pretty taste of his forthcoming EP All In Time.

Taking time to finely hone his craft; Jacob has merely tested the waters when it comes to his musical endeavours. Fusing 50s barbershop nostalgia and modern soul is not an easy feat, but this is the sonic identity that best describes Jacobs’ previous soft releases ‘Infinity’ and ‘Something in the Water’. Recently Jacob has been hard at work, recruiting a slew of musicians to form his live band, which will be revealed in the coming months, as well as putting the finishing touches on his debut EP at Studios 301 with Jack Prest (Flume, The Preatures, Action Bronson).

All in Time is slated for release on September 9th, but for now audiences will have to suffice with immersing themselves in the tranquillity of ‘From Above’.

With a marching drum beat opening proceedings, 'From Above' quickly morphs into a dreamy, hazy and highly atmospheric song. Jacob Moore's vocals seemingly dance above the music, adding more melody to this creative song. 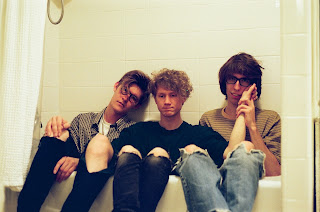 Background - On their intriguingly dark new single “Days,” Long Beach alternative rockers Oblio introduce listeners to a nameless character who suffers from autophobia, the morbid fear of being left alone with one’s self. “Days” is the first single from Autophobia, the dramatic and captivating soon-to-be-released concept record from DIY rock reformists Oblio. More information on Oblio and Autophobia is available on the band’s official website.

According to band member Blake Russell, “Days” represents Oblio’s unshakable work ethic in the DIY approach to being in a band: “We wrote, performed, produced, recorded, mixed, and mastered “Days” ourselves. We also filmed the song’s music video on our own, and will be releasing the single (and album) independently on all major digital music platforms, including iTunes, Amazon, Spotify, and Bandcamp.”

Comprised of multi-instrumentalists Russell, Alex Strahle, and Free Hallas, Oblio have toured nationally, appeared on numerous notable indie ­rock radio programs, and performed at many venues in and around Los Angeles. Russell and Hallas toured with the popular UK rock outfit The Big Pink, for which Free is the current drummer. Strahle, meanwhile, is a current member of and lead guitarist for SoCal rock band SVB. He previously worked with Russell in the band Dead Ball Era.

Oblio have their roots in the local Los Angeles music scene, as the band frequently records and produces music for other local artists and assists bands with booking and hosting local DIY shows. The band also hosts a one ­day only local music festival called Pointless Fest.

'Days' is a rootsy, alt rock song, where the music does the rocking, and the vocals and harmonies add something a little softer, and support the melody. It's DIY credentials are a plus, as ther band clearly know there stuff, and the sounds they wan't to create.