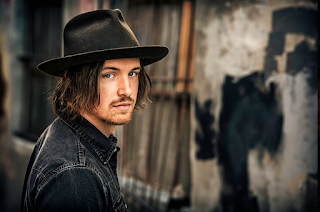 David Luning - Gonna Forget About You.

Background - David Luning was studying film scoring at the Berklee College of Music when he first heard the music of John Prine. As Luning recalls, "A couple of friends invited me over to share some songs at their apartment, and that was the first time I'd ever really listened to Americana music or folk or country or whatever you want to call it. They showed me John Prine, and it just resonated with me so much. I was like, 'Oh my god, this is what I have to do with my life.' I just figured it out in that moment." He subsequently dropped out of school and took to the road as a troubadour, performing at open mics and eventually opening for Dave and Phil Alvin, Jackie Greene and other artists.

Says Luning, "Originally, this song was actually going to be a happy party song... 'Gonna shine my shoes and go out on the town'... But I never finished it in that vein. A little while later, when I was in a low place, I revisited this song and rewrote it from the perspective of a man who is trying to convince himself that he is moving on, though it is clear that he hasn't."

John Prine forced David Luning to drop out of college. Not at gunpoint or anything-the two had never even met-but the effect of hearing the songwriting legend's music for the first time had an equally compelling effect on Luning, who was studying film scoring at the Berklee College of Music in Boston at the time. Now an accomplished artist in his own right, Luning is preparing to release his most dynamic and gripping collection to date, 'Restless,' and he can trace it all back to one fateful night that changed everything.

"A couple of friends invited me over to share some songs at their apartment, and that was the first time I'd ever really listened to Americana music or folk or country or whatever you want to call it," remembers Luning. "They showed me John Prine, and it just resonated with me so much. I was like, 'Oh my god, this is what I have to do with my life.' I just figured it out in that moment."

His self-released debut album, 'Just Drop On By,' garnered acclaim from both critics and fellow musicians alike, with country megastar Keith Urban hailing Luning's "staunch originality." Songs from the album landed numerous film and TV placements, most recently on NBC's 'Grimm,' and Luning's reputation for exhilarating live performances earned him dates with luminaries like Jackie Greene, Dave and Phil Alvin, and Elvin Bishop, along with a slew of festival performances up and down the West Coast. Website here.

With the John Prine references in the above promo, I hoped David Luning would live up to expectations and with 'Gonna Forget About You' I reckon he does. His vocals are just so right for Americana type music and the soundtrack is gentle and understated making this a very addictive song. 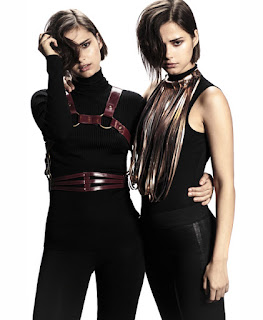 Background - Born and raised in a small town outside of Kiev in the Ukraine, 20-year-old identical twins, Sonia and Anna Kuprienko, were both classically trained. After releasing their debut track ‘Fahrenheit’ in 2013 Bloom Twins had a double impact on both music and fashion, opening the doors to profile pieces in publications such as Vogue, i-D, Wonderland, Hunger, The Guardian, Daily Mail, and The Sunday Times.

Over the last two years, Bloom Twins have continued to build their global presence in both music and fashion, playing live shows around the world and releasing a number of tracks – the most recent of which, ‘Amnesia’ was championed by The Independent. Bloom Twins also completed arena tours of both the UK and Italy with Duran Duran in 2015 and 2016 respectively, and – newly signed with Models1 – they have just returned from Tokyo where they completed fashion shoots for Vogue, Elle, Harpers Bazaar and Numero Japan.

The exciting plot, which takes the viewer through a series of breathtaking extreme sports scenarios, features Go-Pro headcam footage from skiing, bungee jumping, scuba-diving and zip-wiring to name a few, and was shot in several countires around the world including the USA, UK, Italy, Japan, Lithuania, Poland, the Maldives and of course, Ukraine.

20-year-old identical twins, Sonia and Anna Kuprienko co-wrote this track with talented Fiona Bevan and Max McElligott, then handed it over to Greg Fitzgerald for some production magic. It was the first track they wrote after returning from Ukraine where they got stuck for half a year during the uprise. The track is not political at all, rather a call for freedom, but it was certainly influenced by everything that was happening in Ukraine and the fact that they couldn't return to their new home - London.

On the making and narrative behind the video, Bloom Twins say; "We tend to forget about the simple pleasures in life that make us happy. The world is our oyster. It’s only needed to be prized open to be enjoyed, with the pearl as the prize. Life should be about love, peace, happiness and freedom, and a home for it all is our beautiful planet.”

Their debut album, which has been recorded and produced by Duran Duran’s Nick Rhodes, will be out in 2017. Facebook here.

'Set Us Free' is a fine electro pop song that like the twins, is already getting a lot of attention. Vocals are good, however for me it's the soundtrack that makes the track a little more special and worth a share (honest!).