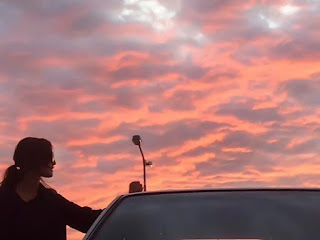 Background - Hailing from Sweden, Pink Milk are a captivating rock concoction. Influenced by the dreamy shoegaze and gothic minimalism of 90s acts like The Jesus and Mary Chain, Cocteau Twins and Cranes - as well as cult movies and series like Twin Peaks and True Romance - the band’s gloomy, glittering sound casts a languid, moody spell that invites addiction and demands repeated listens...

This latest track ‘Drömmens skepp’ (Ship Of A Dream) is their tortuously dark take on a traditional Swedish folk song…(Staffan Percy’s 1979 version of a Bo Setterling poem). Originally commissioned by Swedish Television, Pink Milk's natural first interpretation was deemed too unhinged, too subversive for prime time consumption and thus was banished to the realm of the underground before resurfacing today to bewitch listeners once more…

Swirling and crashing like a twisted fairytale lullaby or a mermaid siren calling from the cavernous ocean, the band have managed to transform this sweet, traditional song into an apocalyptic assault of syrupy, existential noise. The song describes a heavenly, ghost ship glimmering on the horizon and Pink Milk themselves take a devilish turn across thunderous waters with this one, their first since finishing their Swedish tour and the first before playing a number of select UK shows in early 2017. Website here, and Facebook here.

'Drömmens Skepp' is just something else. Dark and brooding does not come into it, and to describe it as atmospheric would be a case of over simplification. I just love this uncompromising song, they have observed their influences in detail and taken the music further, more please. 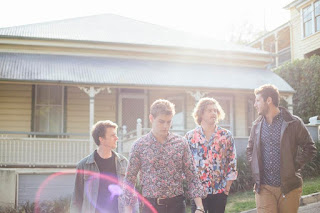 The Vernons - She's Not Mine.

Background - Fresh off the back of a return run of shows, Gold Coast blues rockers The Vernons have just unveiled their video for pensive new single 'She's Not Mine'.

While the clip paints an expressive picture of love gone wrong, this isn't your ordinary break-up song. Front man Jonny Nyst explains, "A break-up can spur a roller-coaster ride of emotions and that's really what the song is all about. One minute you can feel completely regretful and the next minute you can feel utterly betrayed. She's Not Mine really emphasises the darker times of all of that."

First hitting stages in 2012 and quickly notching up a well deserved 2014 Big Day Out slot, The Vernons have since supported the likes of Hoodoo Gurus, Wolfmother, Stonefield, The Rubens, Gang of Youths and more. With three EP's under their belt that include the Queensland Music Award winning track 'To The Sky' and sizzling single 'White Wine' (which is now set to crack 300,000 YouTube hits), The Vernons are crafting a genuine catalogue that offers up classic feeling modern blues.

Bunkered down in the studio for most of 2016, writing from a darker palate as first taster 'She's Not Mine' showcases, The Vernons are set to storm into 2017 and release their most focused material to date in the form of EP #4. 'She's Not Mine' is out now via all good digital retailers. Website here and Facebook here.

With a funky and feisty feel throughout 'She's Not Mine' packs a whole load of power and energy, in what is one very cool and unpretentious piece of rock music.