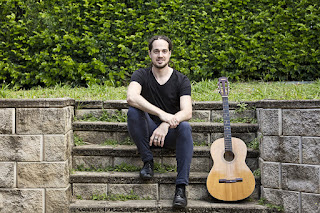 Background - Accompanied by his trusty acoustic foot stomp box, “Stompy” and his foot tambourine, “Tamby", Liam recorded his debut album, The Pessimist & The Optimist at Airlock Studios in Samford Valley with Producer Yanto Browning (Art of Sleeping, Kate Miller- Heidke). The album has been mastered by the ARIA winning William Bowden (Gotye).

To complete the album, Liam invited a very talented bunch of musicians named The Handsome Devils who each brought with them their instrument of choice (electric guitar, bass, keys and drums). Their contribution brought great power, dynamic and space to the album recording and has certainly given their live show a devilish amount of depth.

The first single, ‘Her Name Means Grace’ delves into a theme everyone in this world can relate to, love, and so when the time came to storyboard for the animated film clip, Liam knew exactly which story to base the animation on, arguably the greatest and most tragic love story of all time, William Shakespeare’s, Romeo & Juliet.

Inspired by both classical guitar training and a love of progressive rock, Liam brings a new sound to the singer songwriter genre. With his catchy melodies and acoustic and classical guitar stylings it's impossible not to be serenaded and moved by his music. Website here, Facebook here.

Liam Bryant has distinct and pleasing vocals that are sensibly upfront on 'Her Name Means Grace' where his natural ability to play the emotional part within the song is evident. Musically we go from acoustic to full on rock, adding even more to this very fine track. 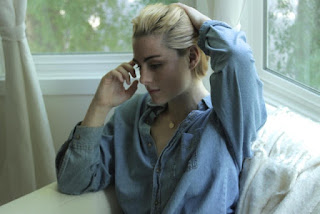 Foster Olson - Over Me.

Background - "Over Me came about at a really hard time in my life,” states Foster Olson. A student of music and film at The New School in New York, the half-Australian singer-songwriter with a love for jazz rooted musicians like Billie Holliday, creates a ballad about being in an imperfect situation but knowing that the right person is always over you, waiting. Over Me has drawn comparisons to Florence & The Machine along with contemporaries like Bishop Briggs, as Foster Olson showcases her vocal prowess, hitting soulful notes with confidence and class.

The goosebumps-inducing power ballad does shine light on a deeper subject. “My dad was diagnosed with cancer and my boyfriend at the time had just moved in with me when I realized he wasn’t the right fit for me. And then I met this other guy who was so perfect for me, but I didn’t know how to get out of the relationship I was currently in,” Olson states. “Over Me” is really about believing the perfect person might be hanging over you somewhere.

And just like the artist she idolized, Billie Holliday showed Foster Olson that it’s okay not to be perfect, and that humans are imperfect. When it comes to music, artists are always on the quest for the perfect performance and every note has to be right. But sometimes every note in life, just isn’t right. Facebook here.

Another song where the vocals instantly demand your attention. 'Over Me' mixes a powerful soundtrack with Foster Olsen's more than capable voice in a dramatic, melodic and very catchy piece. 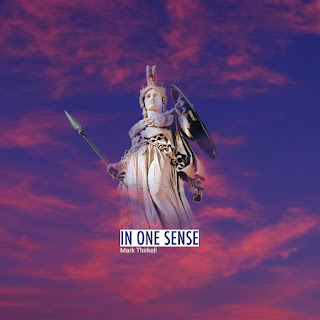 Background - ‘In One Sense’ is a four-track EP - the latest project and debut solo release from Indie Electro vocalist Mark Thirkell.

Having drawn inspiration from a number of Indie bands and performers such as Roxy Music, Joy Division, The XX, Chvrches, The Cocteau Twins, John Foxx, Visage, Bauhaus, Goldfrapp, Jean Michel Jarre, The Cure and Interpol, the influence drawn from likes of Interpol and The Cure is notable on ‘In One Sense’.

The entire EP is accentuated by rich and resonant guitar riffs accompanied by melodic synths alongside Thirkell’s haunting lyrics. The first two tracks ‘Athena’ and ‘Say Goodbye’ feature intermittent rhythmic drum patterns from David Shaw, later taken over by Steve Wattis on track three - ‘The Chime’s’, putting his signature on the leading feature on the song. To end the project, Mark Thirkell has reserved ‘When She’s With Me’, a track that is once again heavily led by his unique and striking vocals. The production and components of the EP ensure its place firmly within the Indie genre and make it a record to watch out for this year.

Mark has worked on numerous previous projects, on one of which he was the lead vocalist for the synth pop band Ultra Arcanum for their debut LP ‘The Silence Inside’. Another being a collaboration with Alex Ford on which they formed the alternative/dark wave outfit Red September and recorded two LP’s. Facebook here.

Taken from the 'In One Sense' four song EP we have 'Say Goodbye'. A vibrant and rhythmic soundtrack with sweeping and melodic vibes throughout, it's a good indicator of an equally strong EP. 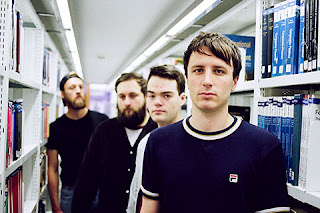 Background - Hull post-punk five piece La Bête Blooms kick off the year with their 2nd EP I Know It’s Nothing after gained praise for their single (& EP opener) Breaking In which included support from BBC 6 Music’s Steve Lamacq, playlist and chart action on Amazing Radio, an Xposure Hot One accolade from Radio X’s John Kennedy and excellent reviews from GigSlutz, UberRock and more.

Produced by Matt Peel (Eagulls, Pulled Apart By Horses), 4-track EP I Know It’s Nothing is rife with lacerating guitar riffs and feedback throughout, while gritty lo-fi vocals, unshakable in their sense of belief and delivery, give the listener a no-nonsense shot in the arm that oozes lo-fi anarchism. Lead singer Daniel Mawer says of the EP that its brutally honest subject matter depicts crippling anxiety and loneliness, tackling the subject matter straight on with defiance and an “us against the world” mentality, fuelled by the bands hometown of Hull.

La Bête Blooms have grown in confidence since their inception, and by merging a wall of noise with a keen ear for melody they have developed from their shoegaze beginnings to become a post-punk powerhouse. The band’s desire to prove their worth with a unique take on life up north echoes their home city Hull’s sentiments as it becomes 2017’s UK City of Culture. Facebook here.

The music and the video for 'Low Hummer' captures the overall feel of the EP in the manner that it is totally unpretentious and cuts to the chase. The attention the band are receiving within the UK is more than merited. 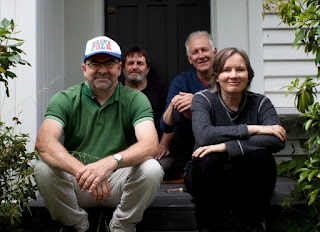 The Bats - No Trace.

Background - The Bats release their new video for 'No Trace' - the second single off their recent album 'The Deep Set'. Out now one Flying Nun Records. Five years after the release of their last critically acclaimed album, The Bats have returned with album number nine, The Deep Set. A band that continues to defy the odds, allmusic.com recently hailed the band as “one of New Zealand's great treasures... anytime they make a record, especially one as good as The Deep Set, it's an event worth celebrating.”

The video is a heartwarming Scooby-Doo styled game of hide and seek, following a group of children around a rambling house on a scorching summer’s day. Directed by Andrei Talili and shot by Scott Jackson, the video beautifully visualises the band’s trademark jangle and bounce and charmingly echoes Robert Scott’s lyrics of landscape and longing - ‘lost in the street / trying to meet / someone to try and help me / faces around look to the ground / wondering what might be’. A blend of planned shots and spontaneous following, it’s a romantic walkabout around the Christchurch house sure to evoke a nostalgic fuzz in the most adult of eyes. The video’s youthful talent appear delighted in each other’s company; the game punctuated by joyous air guitar sessions and culminating in a fort hangout worthy of Little Rascals. Website here, Facebook here.

The Bats may well have a considerable back catalogue of material, however as the song 'No Trace' demonstrates, they are still more than able to present fresh, and likable songs. Pretty good for a second single from album number nine!