September 18, 2017
Having just returned from a week away, yesterday I opened the Beehive Candy inbox, where hundreds (& I mean hundreds) of messages expectantly awaited our attention. As editor (well it sounds good) I had hoped to get a couple of updates out last week, but heroically failed to set up any Internet connection in West Cornwall, or take along the various passwords required for others to assist. So a week in a remote wonderful timber chalet in the middle of a beautiful woodland setting, far from any mobile connection, was just right for me, not so for Beehive Candy. That said it really is worth getting totally off the grid and as much as I love music, I would do it again tomorrow if I could. Anyhow let the catch up commence.... 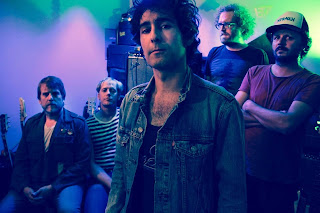 Background - Earlier this year, the Portland, OR-based Blitzen Trapper accomplished a unique feat for a rock band who has been releasing albums and touring for the better part of two decades: a staged musical titled Wild & Reckless that ran for 28 performances at Portland Center Stage. The band is announcing a new album of the same title that was born from the stage production and as a companion to their 2008 breakthrough album Furr.

"'Rebel' is a song about a guy who for the love of a girl follows in his father's footsteps only to find it to be a scam," explains principal and frontman Eric Earley. "After several tries at the American dream he ends up selling cocaine to blue bloods in the Hollywood hills. Something of a lost Raymond Carver story with shambling near-country soundtrack."

The album Wild & Reckless was born from the stage production that the band spent the better part of a year producing. The half musical, half rock-opera dealt with heroin abuse, desperation, true love and western power structures. The story evoked a bygone era of Portland with this sci-fi love story, featuring a rock-and-roll score that paired unreleased songs with favorites from the band’s catalog.

Following the success of the production, the band took 7 original songs from the production and developed the theme further into the 12 songs that comprise the new album Wild & Reckless.

Frontman Eric Earley also sees the record as a companion and extention of their 2008 album Furr. "Wild and Reckless” is something like a cross-eyed stepchild to Furr, in that it chronicles the darker dystopian stories of rural and suburban west coast death-drive via a riffing psychedelic landscape. Ten years after Furr with all its talk of murder and the end of the western world, it seems there's more to tell."

'Rebel' is a fine alt rocker with more than a hint of Americana about it. Getting on for two decades of recording & touring, Blitzen Trapper can clearly still pen and produce some catchy and high quality music. 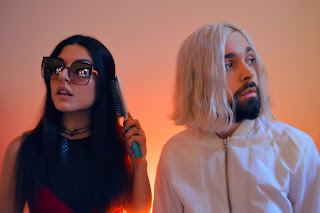 Flora Cash - Roses On Your Dress + You Are Healing.

Background - Flora Cash is a Swedish/American couple who formed through a collaboration on Soundcloud. Shpresa Lleshaj and Cole Randall’s shared passion for music fosters their creativity, inspiring them to musically explore the complexity of relationships in their music.

In short, Shpresa Lleshaj and Cole Randall’s shared passion for music fosters their creativity, inspiring them to musically explore the complexity of relationships in their album. The darker side of love is a theme demonstrated in the tone of the “Roses On Your Dress” music video and the lyrical desperation to understand your lover. Listeners will recognize the cinematic qualities of a melancholic Lana Del Rey ballad, accompanied by Cole’s brooding male vocals.

The music video takes place at a fabulous mansion, where the lovers inhabit two worlds: the modern middle class living outside, and the wealthy aristocracy living inside. The couple only interacts inside the mansion, showing affection until the relationship takes a turn for the worst. The wealthy couple fights as the middle class couple calmly watches them. In the end, the relationship falls apart because money cannot sustain happiness.  But that’s okay, because nothing lasts forever (and it’s fine). They have each other and that’s all that really matters.

“Roses On Your Dress is a track about individuality, struggling to make a distinctive mark upon the world and the ways in which that struggle affects each of us. It also touches on the challenges of being marginalized; an “outsider” …and the brutality with which different societies, including our own, work to shame and strip us of the uniqueness which contributes to our own inimitable vantage points.” - Flora Cash The album is out everywhere now via the Swedish label Icons Creating Evil Art. Website here.

Two songs to share 'Roses On Your Dress' and 'You Are Healing' and both are powerful and imaginative tracks. Flora Cash deliver an expansive, lush sound where emotions simmer and the music adds to the beautiful feeling they create. 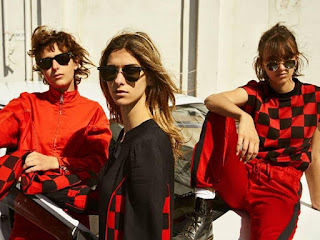 Background - With their youthful candor, it didn’t take the three rock sisters long to play themselves into the hearts of rock fans everywhere. Even though the latest single Look Look Look! relates to growing up, there is nothing slowing the three Danes down.

The onrushing sisters sing about loafing about and the bad habits. That comes with not yet having figured out how to structure your life. “This track was written at a point in our lives, where we all had to get used to time with restlessness and insecurity” says Noa Lachmi.

In the almost Sofia Coppolan music video directed by Daniel Aude, viewers are invited into the dream world of a young woman holding onto unaccountable playfulness, while also exploring her own true self. The restlessness is so thick you could cut through it with a knife, while sisterhood and self-absorption is embraced wearing shiny whigs. The single Look Look Look! is a taste of the upcoming debut album, which will be released on October 6th. Facebook here.

Some feisty no nonsense rock comes along in the shape of 'Look Look Look!' The three sisters might be wearing shiny Whigs in the video, however the energy & attitude suggests this is all part of the game, not a front to hide behind. 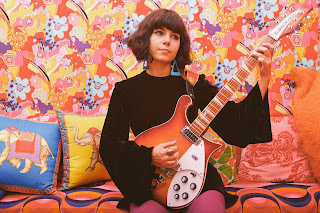 Background - Vocalist, songwriter, and multi-instrumentalist Veronica Bianqui integrates the raw energy of garage rock with the passion of classic soul and R&B, and the pop sensibilities of 60s girl groups while maintaining an intense yet playful edge. Perhaps it’s her background in musical theatre, jazz, classical, and even Indian classical music, or her mother’s propensity for blasting The Beatles and Joe Cocker around the house, but Bianqui’s tastes and influences cross a wide spectrum of sounds. In her live show, Bianqui and her band consisting of up to 10 members—reminiscent sometimes of a revue– combine classic showmanship with a heartfelt directness that keeps the music intimate.

Before breaking out with her solo material, Bianqui made a name for herself in the LA circuit, performing in bands that toured across the U.S. and Europe. As a current member of 1960’s inspired folk/surf/psych rock outfit The Blank Tapes, she balances the two bands, often collaborating with bandmate and co-producer Matt Adams, including on her debut album that is yet to be released.

Bianqui’s past gigs include the main stage at Echo Park Rising 2017, headlining slots at The Hi Hat and The Bootleg, a popular residency at Hollywood’s Harvard & Stone, shared bills with Mikal Cronin, The Coathangers, Dead Sara, Cosmonauts, Capital Cities, and more. She has self-booked multiple UK & European tours, and was hand-picked by bookers to play iconic Los Angeles venue The Echo’s 15 year anniversary party in December 2016. In light of this history behind her, it is easy to see why people are coming out in droves to see the young songstress live.

Veronica Bianqui appears to have found a way to merge decades and genres together, the song 'Victim' being a case in point. Hints of differing styles and era's are succinctly put together resulting in one very catchy, timeless song. 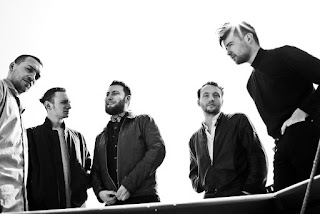 The band’s twelve-date UK tour starts at Sheffield Plug on January 11th and will culminate at Islington Assembly Hall on January 27th. "We are so excited to get back on the road and play for you all, it’s been too long since we’ve seen a lot of these parts,” says Ralph. “Roll on 2018!"

Earlier this year To Kill A King played three consecutive London headline dates (at The Borderline, Oslo, and Omeara), and this week they return to their DIY roots with a European ‘Living Room Tour.’

‘Spiritual Dark Age’ has lyrics that really are food for thought. They are delivered with a tight and punctuated delivery, as the band kick out a fast flowing feast of pleasing music.