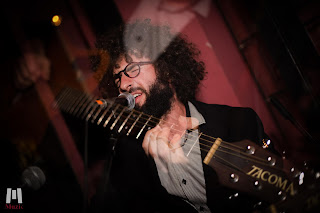 Background - Lilikoy Mananas​ ​​prepare the release of their debut release ‘Dangerous​ ​Calm​’ with the release of the dreamlike single “IAMWHATIAM​” in September 2017. The track delivers unashamedly pop melodies over dreamy guitar lines and melancholy tones. This is a great introduction to the band’s sound marking the beginning of what promises to be a very prolific year.

Lilikoy​ ​Mananas​ have a unique offering in the current Tel​ ​Aviv​ a contemporary musical landscape where they find themselves moving between the claustrophobic feeling of the modern world and a constant search for existential tranquility.

Combining the harmonious sound of live instruments with the electronic tools from their studio setting the band is unafraid to explore new sounds and combinations. Songwriter/ multi-instrumentalist and band leader Yonatan​ ​Marcus​ recruited his close friends to collaborate on what would become the debut single “IAMWHATIAM​”. The chemistry during those sessions was undeniable and they decided to record a collaborative full length.

The resulting debut album “Dangerous​ ​Calm​”, produced by Rotem​ ​Frimer​ and Yonatan​ ​​himself, is expected in October 201 7 and showcases a band that isn’t wasting time arguing over the definition of blues, jazz, folk and electronica but rather prefers to operate with all and any tool at their disposal. Facebook here.

The vocals & harmonies are wonderful on 'IAMWHATIAM' whilst the music has something understated and yet pretty special going on. A short & yet quite thrilling introduction to Lilikoy Mananas​ for me, with hopefully a lot more to follow. 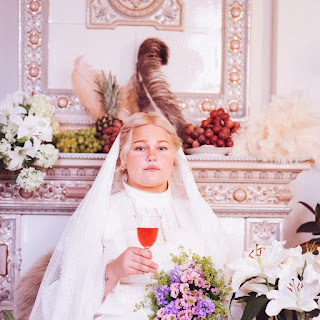 Sarah Klang - Left Me On Fire.

Backgrtound - With only two singles under her belt, Sarah Klang is already an artist who’s made listeners all over the world envy her melancholia. Debut single ”Sleep” was released in 2016 and early 2017 ”Strangers” hit the streaming services – praised by critics and public alike. When she played a homecoming show at the Way Out West festival in Gothenburg earlier the year Sweden’s main newspaper Dagens Nyheter left the venue all stunned. It was agreed among critics - a star was born that night.

Klang's sound is like no-one else and with her voice she encapsulates listeners into her own universe – a universe where you get images of old reel tape recordings in your head. Inspiration is found in old brides dresses, Barbra Streisand, ambient electronica, 80’s dads and plastic flowers.

”Left Me On Fire”, Sarah’s new single, is like previous releases written and produced with long time collaborator Kevin Andersson, but this time around Thom Monahan (Pernice Brothers, Devandra Banhart, Vetiver, Beachwood Sparks etc) handles the mixing process. What comes out of this is a fragile and moving soundscape. It draws you into the core of the storytelling. A great ballad from a great voice.

"Left Me On Fire" is written in the vacuum that you feel after a break-up. You continue your life but you are burned. For me the song is about moving forward with your life, while still in love with the person who broke your heart and nothing will ever be the same from that moment on.”

This fall Sarah will do shows (highlights includes a performance at Reeperbahn Festival in Hamburg and a headline show in hometown Gothenburg) leading up to the release of debut album ”Love in the Milky Way” early 2018. Facebook here.

We first featured Sarah Klang back in February with 'Strangers' & are really pleased to be able to feature the new song 'Left Me On Fire'. Her vocals ooze feeling and passion, the music is superbly arranged around her melodic voice, adding to the melancholic mood. Put simply, I cannot wait to hear more. 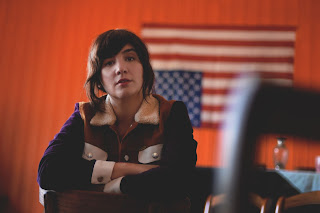 Joana Serrat - Trapped In The Fog.

Background - ‘Trapped In The Fog’, Joana Serrat’s new song and lead track from her forthcoming album ‘Dripping Springs’, featuring members of Israel Nash/Midlake. Joana Serrat explains the inspiration behind the track: “Trapped In The Fog is an oneiric song through which I can travel in time, no matter if it’s past or future. I wrote this song one night that I was driving back home after a solo show. Where I live there's a lot of fog in winter and suddenly that very night in the middle of the forest, the road got surrounded by shoals of fog. It was very hard to see and I had to slow down. The haze was constantly taking different shapes, it seemed to dance. It felt like a metaphor for life and I had the feeling something inside the shadows was talking to me."

For her fourth album in five years, Joana Serrat travelled from her home in Vic, Barcelona to the Texas Hill Country outside Austin. There she teamed up with Israel Nash at his Plum Creek Sound studio near the town of Dripping Springs. For the recording sessions Nash & Serrat corralled a stellar crew of musicians: Joey & Aaron McClellan, (Midlake, BNQT, John Grant, Israel Nash), Eric Swanson & Josh Fleischmann (Israel Nash), Dave Simonett (Trampled By Turtles) and Dennis Love (Futurebirds), as well as Nash himself providing additional guitar and backing vocals. Israel Nash produced the album, with Ted Young (Grammy award winner for The Rolling Stones) on engineering and mixing duties.

It was no mean feat to gather all these creative talents and get them working together as a team, but as Israel Nash commented, “it was very easy to work with Joana because she knows where she wants to go and she leads us all there. Joana’s lyrics are brilliant. She uses images and colours to describe her songs and luckily that's the way we are used to working.” Joey McClellan adds, “her voice was our guide”.

The resulting album - which Joana named after the local town - is unsurprisingly Joana Serrat’s most Americana album to date. Mojo described her last album Cross The Verge as “Mazzy Star guesting on an early Neil Young demo”, but with Dripping Springs she has produced a far more rounded and polished piece of work. Serrat explains, “it’s an album that deals with farewells but is filled with an optimistic melancholy that doesn’t isolate nor enclose the spirit and determination to realise our own dreams”. It was a bold move by the young Catalan to cross the Atlantic to work with a bunch of American musicians that she had admired from afar but had never met.

What she came away with is, however nothing short of magnificent and should see Serrat building on her existing achievements which have included a BBC 6Music Recommends Track Of The Week selected by Gideon Coe and Lauren Laverne the latter commenting “she’s an amazing artist an astonishing talent and I love her songwriting”. Within the last year Joana has toured with The Jayhawks, The Handsome Family & Courtney Marie Andrews played the main stage at Primavera Sound Festival showcased at SXSW and has been invited to Nashville in September to showcase at AmericanaFest 2017. Pre-order here, Facebook here.

It's been a while since we last featured Joana Serrat, an artist that has consistently impressed me. 'Trapped In The Fog' is our first glimpse of her forthcoming new album & her new musical collaboration is, based on this track, very promising. Vocals as ever are notably refined and the Americana rich music is fabulous.