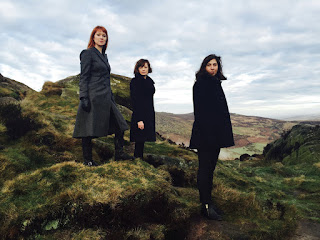 Beatrix Players - All That Thinking / Hurt.

Background - London-based all-female trio Beatrix Players have been announced as winners of the Prog Magazine Limelight Award for 2017 at the ceremony last week. The band are celebrating the win with the release of their new, double A side single All That Thinking / Hurt, plus a single launch being held at London's St Pancras Old Church on Thursday 5th October where they will be joined for the evening by the SOUND choir.

The Limelight Award highlights the "emerging talent that's risen to the top of the prog ocean over the past 12 months".

All That Thinking is taken from their 2017 debut album Magnified, and is a song about the difficulty of having a child and the blame that goes on between partners, and the band are delighted to have joined forces with leading national charity Fertility Network UK to help raise awareness of National Fertility Awareness Week which takes place on 30th October - 5th November. This years they are celebrating 40 years since the first successful IVF treatment.

This is a campaign that especially resonates with Beatrix Players' vocalist Amy Birks: “I was told today that 1 in 6 couples experience difficulties with fertility. A fact that took me right back to the NHS waiting room, a very beige room filled with pensive faces; couples and individuals of all ages from all walks of life and all with one thing in common, fertility difficulties”

All That Thinking begins with these lines 'Sometimes I’m scared, at the end of another wait. All that thinking for nothing because nothing ever came, and I don’t mind if it’s you but I’ll weep if it’s me…'

and those sentiments clearly resonated with the charity - ‘Fertility Network UK are very much looking forward to working with Beatrix Players during this year's National Fertility Awareness Week. Their single, All That Thinking is incredibly emotive and is something we believe will connect with anyone who is struggling, or has, struggled to have a family.'  Susan Seenan, CEO, Fertility Network UK. Beatrix Players website here, Facebook here.

Our fourth feature in under a year for Beatrix Players & that is not a coincidence, they simply & consistently write & perform fabulous songs. Celebrating their winning of the Prog Magazine Limelight Award for 2017 they have now released 'All That Thinking / Hurt'. As long as they keep on producing music of this calibre and we can share them, we will! 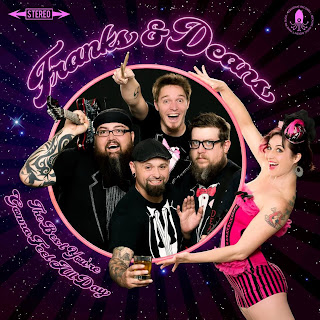 Background - SquidHat Records is proud to announce the highly anticipated sophomore release from the legendary Franks & Deans! Available digitally, on CD and on limited edition pink vinyl nationally and internationally through MVD Entertainment.

On their second release “The Best You’re Gonna Feel All Day” Franks & Deans keep doing what they do best; f*@king up your grandmother’s music! The Sinatra and Sammy standards are there, from “Fly Me To The Moon” to “Candy Man” but they also extend their unique sound with fresh new takes on The Drifters, Louis Prima, Bobby Darin and Ricky Nelson. A fast paced audio party that is sure to please.

SquidHat Records is an artist friendly, independent record label and multi-media company created to help talented, interesting, creative and passionate artists record and promote their music or performances, develop their brand and image, and increase their exposure to a larger audience. Our focus includes, but is not limited to, the Punk Rock, Aggressive Indie and Subculture scenes. Franks & Deans website here, Facebook here.

Franks & Deans take a classic track, in the case of our featured song 'Splish Splash' the rework is almost respectful to the original. It's the tip of the iceberg as far as this new collection of material is concerned, their manic, tight & occasionally border line insane punk version are an absolute delight. Don't get me wrong, I am old enough to remember my parents playing some of the originals (honest it was my parents) & those tunes have grown on me over time. However I can't but help feel a warm glow inside with these new versions. 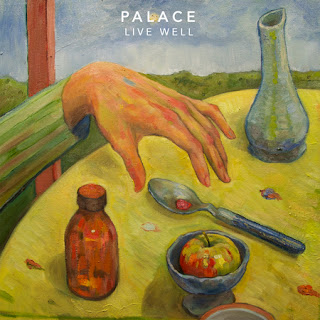 Background - Palace have released a new single; 'Live Well', taken from their acclaimed debut album 'So Long Forever', which dropped earlier this year on Fiction Records. A fan favourite, the track has been streamed over two million times on Spotify and showcases the band at their delicate, intricate best. The track is written about a relationship ending but ultimately finding positivity in its wake. In the words of front man Leo Wyndham, "It's a hopeful song - about feeling blessed by someone else's love even though it's over and ended."

Palace are very excited to be touring as main support to Public Service Broadcasting this month, taking them to twelve venues across the UK, including London Eventim Apollo for the finale on 26th October. Venues of this size are no stranger to the band, who made their debut at Shepherd's Bush Empire this year in support of the album release, having previously sold out London shows at Brixton Electric, Scala and ICA.

It wasn't just UK tours that Palace sold out last year; they sold out their European tour and a number of shows in New York. They also played rapturously received sets at festivals across Europe, including Glastonbury and Reading and Leeds. Closer to home they started their own night called 'Palace Presents' at The George Tavern, London where they played their first ever show and now curate their own monthly line-up. The night is always rammed, which helps support the 600-year-old venue which, like many other independent venues, is constantly threatened with closure.

On the forthcoming shows with Public Service Broadcasting, Leo says "They're a truly amazing and eccentric band and we're pumped to be playing to huge crowds and getting to watch their incredible live show every night." Facebook here.

Our second feature for Palace also taken from the 'So Long Forever' album is the new single 'Live Well'. Subtle melodies and a beautiful arrangement where both vocals and music share centre stage, this is a gentle nudge to check out a really fine album. 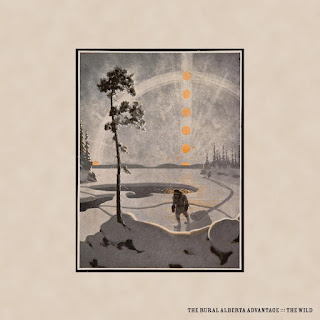 The Rural Alberta Advantage - Toughen Up.

The Rural Alberta Advantage have also announced North American tour dates which will see the band joined by Vancouver's Yukon Blonde for two months beginning October 20th. Canadian dates include stops in Halifax, Ottawa, Vancouver with additional shows now added after quick sell outs in Edmonton and Toronto. Tickets are on sale now. Watch a trailer for the tour here.

Change is constant. Certainly that’s always been the case with the Rural Alberta Advantage. Through three albums, Juno and Polaris nominations, the steady hum of critical praise and the relentless miles of constant touring, the trio have not just been confronted with change, they have been wailing, pounding and sighing their way through it. Change hung over them in the melancholy nostalgia of Hometowns, shook them during the finding-your-feet urgency of Departing and found its way through their cracks in the turmoil of Mended with Gold.

Though it’s always left a mark on the band, as they journey into The Wild, their fourth album, this perpetual change seemed to be casting a darker shadow. Maybe it’s the fact that singer and songwriter Edenloff almost watched his childhood home of Fort McMurray burn to the ground. Maybe it’s just that everyone in the band is getting older. Maybe it’s just that we’ve all had a rough year. But never before has the band felt quite so surrounded by the heaviness of being — nor quite so determined to pull through. Facebook here.

We featured the track 'Brother' from the forthcoming 'The Wild' album last month and the new share 'Toughen Up' confirms for me, that our initial excitement for the album was well founded. This is a band that for reasons I cannot explain, should have received far more exposure & recognition by now. 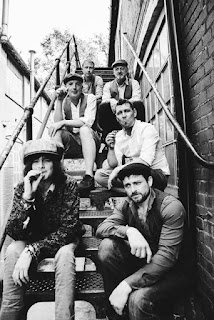 Background - Hartlepool (UK) based 5-piece The Jar Family have just released their new single ‘Debt’ (via Jar Records).  One to check out if you get the chance. It’s a song born from the growing financial concerns seen in their hometown.  In the bands words “it's a song about life in modern Britain and the pressures of the soaring cost of things. It's a big step forward for us stylistically to something more raw and reflective of the times."

Taking their name from the donations jar they passed around at early gigs, the band are a tight knit group who realised that they were stronger collectively than they were individually. Although on paper the idea of five very different and charismatic personalities with a wide range of musical styles working together harmoniously seems unlikely, the fruits of their labor speaks for itself.

The bands distinctive, rootsy sound was created in the remote Cambridgeshire countryside. It’s there that the band built themselves a basic rehearsal studio, and there where they spent over a year living in a ramshackle collection of old caravans, developing and refining what was to become the Jar Family sound.

A relentless touring schedule, alongside supporting the likes of Jake Bugg, Babyshambles, and Alabama 3, has brought their raucous and engaging live show to all corners of the country. Picking up an ever-growing army of admirers as a result of this live activity the band has now established a major fan base of fanatical supporters throughout the UK. Facebook here.

'Debt' is a gritty, earnest rocker from a band that have a very poignant message to share. It is also a dynamic, hot blooded, passion fuelled song that suggests guitar rock has yet another band to keep the genre fresh and relevant. 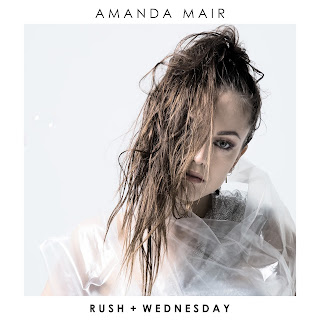 Background - Amanda Mair is a Stockholm native who gained attention as a teenager with her debut single, “House”. The Washington Post praised her grown up Kate Bush sounds, while Swedish national newspaper Aftonbladet described her album as one of the best Swedish debut albums of all time. Amanda has evolved since her debut – both as an artist and as a songwriter, but also as a person. She spent time focusing on herself and growing up. Her maturity shines through her best work yet on Despotz Records.

“Rush” is a dark and contemplative song about longing to feel the rush of a physical and emotional connection. An eternity has passed since the relationship crumbled. One familiar touch can bring those feelings rushing back. Introduced as a piano ballad, the song turns cold with chilling Trentemøller synths.

“Wednesday” is a beautiful and atmospheric swan song. The cinematic quality of the song reveals aching emotions as one might imagine a vast landscape devastated by war, or the inevitability of love. This song hits you right in the feels.

In Amanda’s words, “’Rush’ is about when passionate attraction and destructive addiction allows you to repeat the same hurtful mistake over and over again. While ’Rush’ paints a picture of the continual restless searcher, ’Wednesday’ allows you to take a step back and realize the tedious truth of one reality you’ve fallen in love with." Facebook here.

Two tracks from Amanda Mair came our way the other day. They contrast very well & show different ideas & styles from the artist, so lets share them both. 'Rush' and 'Wednesday' are both creative modern pop songs with that hard to express "extra something" that suggest a musical maturity many aspire to, and only a few actually deliver on.