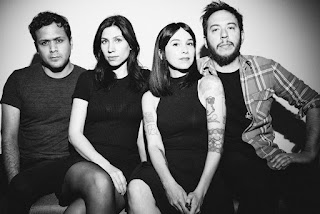 Background - Blushing is an Austin, TX based dream pop / shoegaze quartet comprised of two husband and wife pairs that originated in the summer of 2015 when Michelle shared a few songs with long time friend Christina that she had been writing on guitar.

A friendship quickly became a musical partnership as Christina, a classically trained vocalist, picked up a bass and together they evolved those rough songs into fully formed compositions. They then enlisted the talents of their spouses, Jake on drums, Noe on lead guitar and shortly after self-released their debut EP "Tether" in January of 2017.

Energised by positive reception, a growing fan base and a grip of new songs they headed back into the studio as soon as possible. They recorded their follow-up EP “Weak” at Bad Wolf Recordings in Austin, TX. The album encompasses influences from all of the bands they collectively share a deep affection for such as Lush, Cocteau Twins, The Sundays, etc.

'Weak' opens with a dream pop feel & quickly powers up adding the shoegaze dimension. Melodic and atmospheric, the band have some very fine influences, however they definitely add their own quality and imagination. 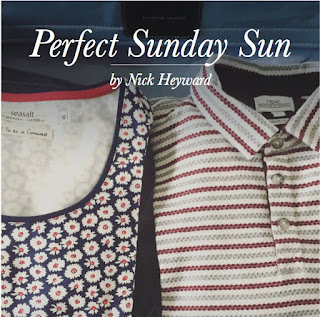 Background - Nick Heyward's has a new video for his upcoming single ‘Perfect Sunday Sun’ out on 17th November via his own label Gladsome Hawk. It's from his critically acclaimed new album ‘Woodland Echoes.’ Nick is also touring the UK ins 2018 starting on 24th May at Concorde in Brighton, taking in 13 dates including 02 Academy Islington in London.

The “idyllic” track, as described by Uncut magazine, focuses on “my interpretation of indecision, idealism and havering - a kind of trilogy, like Krzysztof Kieślowski’s ‘Three Colours’ film series,” explains Nick. Its college rock choruses part away from the bucolic pop of the rest of the album, making the single into the perfect soundtrack of an endless English summer’s afternoon.

Prior to his hugely successful and prolific solo career, Nick came to prominence as the frontman of percolating pop-funk new wave group Haircut 100, a foundational part of the 80s-pop explosion. They released four UK Top 10 hit singles, with their debut album ‘Pelican West’ reaching no. 2 in the UK album charts, no. 31 in USA’s Billboard 200, and ending up being certified platinum by BPI, with Nick gracing the cover of pacesetting style magazine The Face. WEBSITE, FACEBOOK.

'Perfect Sunday Sun' is one of those songs that does exactly what the song title suggests it should do. Add in the opening lyrics & it gets personal for me, having spent some fabulous times in Richmond, it's wonderful park & walking along by the Thames. The video adds some hazy sunny vibes, and the music is further evidence that Nick Heyward still has plenty of creative flair. 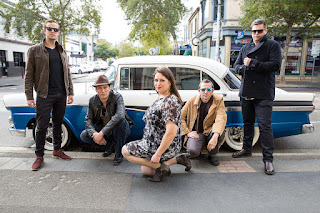 Background - The Sea Birds debut album …blue or grey explores the rich musical soundscape of this Melbourne five-piece from Australia. Following the 2015 release of their EP …a short romance, this album captures the band’s indie pop sensibility with shades of alt rock and lyrical story telling of modern day relationships – intricate, uplifting, hopeful and honest.

From the innocence of early rock’n’roll in Love gets in the way, the evocative and haunting Downtown Waitress and the complexity of Stay, the band’s rich dexterity, strong vocal harmony and nuanced guitar work define its approach to writing music – accessible, yet beautiful and simple melodic pop songs.

The Sea Birds strength lies in the cross over potential to be many things due to the diversity of the group’s influences and members. Comprising dual lead vocalists Lara Wentworth and Loic Mamet, lead guitarist
Michael Amarant and rhythm section, James W. Du Plessis on drums and Lucas Wentworth on bass.

…blue and grey was recorded with David McCluney at Atlantis Sound and David Warner at Studio One.Be, and produced by David McCluney and The Sea Birds. WEBSITE, FACEBOOK.

'Heavenly Skies' is a refined and beautiful indie pop song. Melodic and extremely catchy, as the track develops there are hints of the bands alt rock leanings. I'm left looking forward to hearing the album.