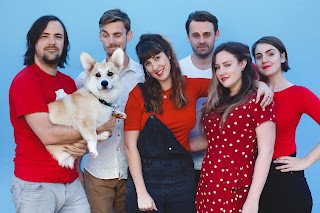 Background - Following on from this year's taster track 'Fight On', North-Perth avant-folk darlings Simone & Girlfunkle are pleased to share their summery new single 'Gary Song'. In celebration of the release, the band will be taking to stages across Perth and Margaret River this month while also showcasing new material from their forthcoming album due out in 2018.

In her ever-so poetic and enthusiastic demeanour, vocalist Bridget Turner says of the new track "Gary Song is inspired by the upbeat-meets-melancholy vibe of bands like Alvvays. It’s an ode to our dead best friends – our pets specifically, one very loving and loved, yet guitar-phobic feline: Gary."

Hailing from the city of lights avant-folk darlings Simone & Girlfunkle were born on one of North Perth’s hazy, sun-drenched afternoons. With a mesmerising combination of three-part female harmonies and delightful arrangements, they produce shimmering, winsome pop-folk perfection that demands attention. FACEBOOK.

We featured Simone & Girlfunkle back in May and it's a pleasure to share the new single 'Gary Song'. It's another top quality indie pop piece, their vocals are gorgeous and the band simmer with musical passion. 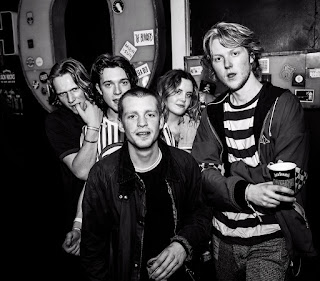 Inspired by the current social and political climate of the world and the uncertainty we all live with, the synergy between the lyrics and themes signified by 8 – the number of infinity – hints at the real depth within Eight, touching on aspects of joy, strength, balance and power in unity.

Discussing the sixth track from their forthcoming double EP, the band stated: ““Cannibal Song has a real childlike playfulness in the music and melody, which complements the more sinister, comedic lyrics. Together it makes a rather pretty little nightmare. For the video we wanted to incorporate inspiration from classic low budget horror films such as Texas Chainsaw Massacre and other 70s slasher movies. The DIY nature of the production and filming process, just us and a few of our mates, really lends itself to that style.”

The band will be heading out on their debut headline UK tour this November, showcasing the record in its entirety as the band envisioned, including new material unreleased at the time of tour. White Room’s Cannibal Song, is out now via Deltasonic Records and available on all platforms. WEBSITE, FACEBOOK.

Third time around for White Room on Beehive Candy this time with 'Cannibal Song' accompanied by a rather darkly humoured  & almost film noir video. The song is melodic indie rock and very catchy, I might just settle for listening to the track in future, less chance of a nightmare that way! 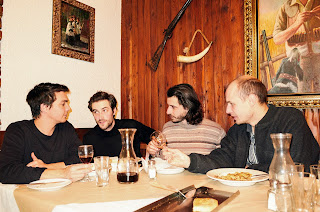 Background - Mildlife have announced their debut album with the premiere of the first song to be taken from it, 'The Magnificent Moon', at Dummy Mag where it was described as a 'masterpiece'. Tom Shanahan of Mildlife has said “The Magnificent Moon feels like the veteran journeyman to the rest of the album. I’m not sure if that’s because it was written first or because it seems to know what it wants and has a more considered direction. It never really second guesses itself except for maybe just before the outro when he realises he may have journeyed too far and his space suit has a hole in it. But then he just jams some gum in the hole and gets on with it anyway.”

Mildlife take the musical canvas, rip the lids off the paint tins, and throw vibrant splashes of colour into kaleidoscopic jams. Old friends, the Australian four-piece bonded over the desire to push musical boundaries, developing tight live shows bolstered by wild improvisation and a debut record that mines jazz, psych and disco for its irresistible groove. A melting pot of musical sensations, Mildlife combine progressive 70s sounds with electronic krautrock, backed by a mixture of rhythmic funk, house, and dream-pop, to create an addictive atmosphere that’s illustrated perfectly by their first single ‘The Magnificent Moon’, out November 3rd via Research Records. The single comes as an introduction to their highly anticipated debut LP due out early next year.

Taking cues from artistic pioneers such as Can and Herbie Hancock, creating a Mildlife song is a constant process of teasing and tugging, expanding and refining. But Mildlife are adamantly not a studio band. Between 2014 and 2015 they took a year off playing shows to figure out how they could produce as much of their music live as they possibly could without losing its complexity. “It makes the performance, the composition, more malleable,” says guitarist and multi-instrumentalist Adam Halliwell. Bassist Tom Shanahan adds “It feels more authentic. The energy can be in the song rather than sitting on top of it. We wanted to leave a lot of room for improvisation.”

On the first single to be released from the upcoming album, bassist Tom Shanahan explains its entrancing grip further, “The Magnificent Moon feels like the veteran journeyman to the rest of the album. I’m not sure if that’s because it was written first or because it seems to know what it wants and has a more considered direction. It never really second guesses itself except for maybe just before the outro when he realises he may have journeyed too far and his space suit has a hole in it. But then he just jams some gum in the hole and gets on with it anyway.” WEBSITE, FACEBOOK.

'The Magnificent Moon' is just seconds short of nine minutes duration, and not a moment is wasted. Layers of rich musical sounds twirl & swirl around, as the band morph between genres and create a fabulous sound. The vocals are refined, the rhythm occasionally adding a funk feel, whilst the synths are creatively used. The debut album is eagerly looked forward to.