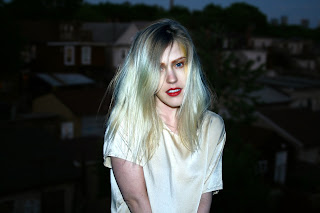 Background from Kira May - I’m an experimental pop artist from Toronto. Back in 2014, I released my debut EP Health, and have since shared stages with the likes of Jean-Michel Blais, Absolutely Free, Diana, Your Boy Tony Braxton, and more. Following Health’s release, I took a step back to focus on treatment for the anxiety and depression that had been holding me back since childhood. During this time I wrote a full-length album as a documentation of that journey. Sense will be released this spring, and I’m thrilled to share the video for its lead single with you today.

“Muscle Memory” explores the ways in which our bodies hold onto our painful histories. This is partially a love song for my body, which continuously strives to protect me and push for my physical and emotional survival, but it is also an exploration of the “letting go” required to move forward. When past traumas are no longer dangerous to us, although well-meaning, our bodies’ attempts to protect us can actually become harmful.

This song looks specifically at the damaging effects of negative interpersonal relationships as a very young person who is still forming. In my case, the response was to retreat so deeply into the safety of my own body that it became difficult to get out. Director Allison Johnston brought the sentiment of the song to life in the video, in which we see past experiences and vulnerabilities emerge from within the body itself. Sense was co-produced, engineered, and mixed by Sandro Perri. FACEBOOK, BANDCAMP.

Swirling synth sounds and a slow beat introduce 'Muscle Memory' a song that mixes Kira May's distinctive & appealing vocals with a remarkable soundtrack that develops layer by layer. The video adds more, making the combination of both a powerful proposition. 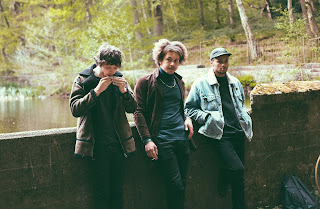 Background - Neo-psychedelic quartet GRDNS release debut single Night Dance, the first slice of woozy, off-kilter rock taken from their upcoming EP out later this year via Dance To The Radio.

Emerging from the largely forgotten and multi-cultural northern city of Bradford, the desert rockers take the influences of Tame Impala and Humbug-era Arctic Monkeys and create their own blend of psychedelia which has already landed them support slots with acts including Stereo Honey, Sea Girls and The Pale White.

Described by frontman Jacob Lyons as a “tantric tail of a quiet night in with a supernatural poetic cosmic titan of a lover with atomic eyes”, the band (comprised of other two main members Cameron Harrison (bass) and Sam Gledhill (guitar) alongside drummer John Fitzpatrick) support Husky Loops with whenyoung later this month before an April UK tour (TBA) and appearance at Live At Leeds.

Produced by James Kenosha (Pulled Apart By Horses, Dinosaur Pile-Up, Rhodes) GRDNS’ Night Dance is out now and will be available on all platforms. FACEBOOK.

From the opening moments of 'Night Dance' there is a delectable psychedelic feel. The music and vocals merge together with more psych vibes flooding through, as the song builds with energy and atmosphere. 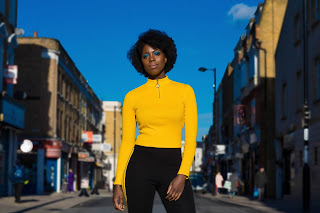 Background - Kadija Kamara takes us into the highways of her expansive imagination on ‘Nothing Left To Lose’, her new EP out now.

Based in London, Kadija Kamara is a singer songwriter who best describes her sound as ‘Alt Soul’. With a love of 60’s and 70’s analogue sounds, Kadija combines her affinity for retro soul music with a host of modern influences. To date, her accomplishments include winning the MTV Iggy Artist Of The Week poll, voted by readers and being awarded funding for her Artist Development Programme by PRS for Music. From collaborations with the likes of Joey Negro, Zeb Bias plus many more, to backing vocals for Zara McFarlane on …Later With Jools Holland.  Kadija has released records under various labels, including Z Records, Defected, and Soul Heaven among others.

Kadija recently curated a night called Lady, which showcases leading female musicians in the underground and commercial music scenes.  She currently holds a residency at the popular Music venue 'The Finsbury', with label/promoters Lost In The Manor.  Its huge running success led to the first Lady Festival at ‘Pop Brixton’ in October last year, marking the first Birthday of LADY & LADY Live Events.

Having had the stunning ‘Eyes On You’ selected by readers for Tom Robinson’s Fresh On The Net’, and with praise from CLASH, The Revue, FAME Magazine, Get In Her Ears, and Hype Machine to name a few, the stage is set for her long-awaited EP Nothing Left To Lose. It’s a diverse set of songs showcasing her broad emotional range and tinderbox potential. Mostly, it’s a clear indicator that Kadija is a free-thinking experimentalist producing work that is totally unique and risque, and that already puts her ahead in the game. FACEBOOK.

Kadija Kamara has delivered a fabulous EP with 'Nothing Left To Lose' a collection of four soulful and creative songs. There is emotion, power, and a gorgeous array of retro meeting today styles, add to this her vocals, which are a perfect match for these genres, and I think we have a winning combination that deserves to heard far and wide. 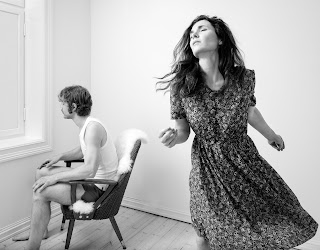 Background - Band Of Gold have premiered the new single 'Well Who Am I' from their forthcoming album 'Where's The Magic'. Nina Mortvedt of Band Of Gold has said "'Well Who Am I' is a quick look at how the brain works when in an obsession, making the smallest of details significant and amazing. It's the yearning and irrational passion that you never get to live out. It makes you numb, feeling like you're in a constant purple sunset. We had such a blast recording this one, and what Nikolai does with his guitar... I'll let that speak for itself."

Band Of Gold are a Norwegian duo consisting of the exceptional songwriter Nina Mortvedt and dynamic musician and producer Nikolai Eilertsen. Eilertsen has been known previously for his stellar bass guitar work with the likes of Todd Terje, Elephant9, and Susanne Sundfør, amongst many others but with the addition of some of Norway’s most creative musicians, they are now crafting their very own brand of skeletal funk, country soul and chamber pop, to create an eclectic, glowing concoction.

The collaboration between Norway’s Nina Mortvedt and Nikolai Hængsle as Band Of Gold, made a splash in 2015 with their self-titled debut being crowned with the Nordic Music Prize against heavy competition such as Bjork and Jenny Hval by the jury of Jeannette Lee (Rough Trade Records), Jude Rogers (The Guardian), Stuart Maconie (BBC) and Jonathan Galkin (DFA Records). This year will see the release of their highly anticipated follow-up album, ‘Where’s The Magic’ on Jansen Records.

Rich bass and drums, silky guitar and dreamy synths courtesy of Hængsle, help guide Mortvedt’s coy vocals, with a twang reminiscent of Natalie Prass, throughout. Hængsle’s tone might be subtle and understated on the latest single from the album ‘I Wanna Dance With You Again’, but her words certainly aren’t. “There’s a hand around my heart and it’s tearing me apart,” she laments. FACEBOOK.

'Well Who Am I' is one very addictive song. The beats and associated music, interact with vocals that just mesmerise and draw the listener in even further. 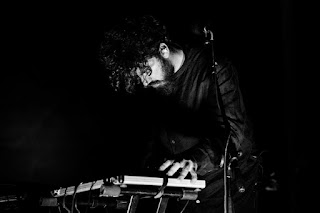 Theodore - Towards? (for what is to come).

Background - Multi-instrumentalist and composer Theodore has announced another sterling single ‘Towards? (for what is to come)’ slated for release on 2nd March via United We Fly. The Greek performer has already garnered considerable success with his previous album It Is But Its Not which was co-produced by Clive Martin (Queen, Reef) mixed by Ken Thomas (Sigur Rós, Moby, M83) and performed live at the fabled Studio 2 at Abbey Road Studios. With over 1.7 million Youtube views, he has received radioplay from the likes of BBC Radio 6 Music’s Lauren Laverne and French station RadioKC, as well as support from publications such as Tsugi and Szene. Theodore has graced the stages of Live at Heart Festival and Reeperbahn Festival -where he was named Best Performance Of 2017. He supported Sigur Ros and DIIV at Release Festival (Athens) in 2016, has just performed Eurosonic Noorderslag and looks forward to showcasing his talents at this years SXSW Festival.

Based in Athens, Theodore's schooling in piano and traditional Greek folk music lead to a professional music career in London, where he studied Music Composition in 2011. Theodore has written music for theatrical pieces such as Matina Megla’s Window, Vladan Nikolic’s film Bourek, and was commissioned to write a new score for Buster Keaton’s classic silent comedy of 1928, The Cameraman. Theodore and his band then performed the score live to the film screening, in the unforgettable setting of the Temple of Zeus in Athens, which he describes as “one of the best moments of my life.” Theodore has gained notoriety for his memorable live performances, dazzling audiences with his mesmerizing stage presence.

Fusing classical composition with electronic elements to create beautiful, atmospheric and often cinematic songs, his sound is characterized by contrasting styles. Citing influences such as Sigur Ros, Radiohead, Pink Floyd, Doors, Chatzidakis, Vagelis Papathanasiou, Nils Frahm, The National, Olafur, Arcade Fire, Max Richter, his unique mélange of influences allow a broad scope of movement from ethereal, to melancholic, to classical, to post rock. ‘Towards? (for what is to come)’ is a sonic stream of consciousness, capturing every nuance of Theodore’s technical wizardry. Covering a wide sonic scope, he drowns ethereal melodies in a cauldron of psychedelic sounds.

Speaking of the single Theodore says “Towards? (for what is to come) is going to be the first song of my upcoming album. This is the initial question I will be exploring throughout the album. It is about the two different sides of one’s personality; the conscious and the magical one and inspired by the battle between them.” WEBSITE, FACEBOOK.

'Towards? (for what is to come)' is six minutes of musical creativity. Sometimes haunting, always flowing and richly layered, the song is an epic of sorts, one that builds into a crescendo of flavours and then quickly ebbs away.