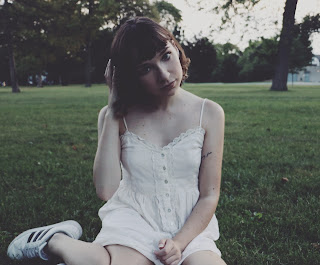 Background - Flower Face is Ruby Mckinnon, a 19-year-old songwriter from Ontario, Canada, whose voice stretches far beyond her years. Taking her musical cues from an eclectic range of influences, her sound sits somewhere between Conor Oberst, Big Thief and The National.

‘April To Death’, taken from new album Baby Teeth, sounds upbeat yet deals with the disillusion that comes with being a human being, and the various methods we use to cope with life, in Ruby’s words “whether that be drugs or dropping out of school or meaningless encounters. It's kind of a cynical take on all the things we do to make life a bit less painful, they feel so passionate and important at the time, but really they're pretty empty.”

Having played piano from the age of 5 and picked up the guitar to record her songs at 15, Flower Face has forged her way as an independent artist for years, amassing 125K+ streams on recent single ‘Honey and Milk’ with no label support or management whatsoever.

While Flower Face’s music has a quiet beauty, lyrically her songwriting deals with the darker side of life. She tells us that “it’s kind of an outlet but also a method of storytelling. A lot of my writing is based on empathy – on putting myself in places I haven’t been as a means of exploring the capacity of my own feelings. I was writing about heartbreak long before I’d ever felt it. I was writing about death before I’d ever lost someone close to me. I had a close brush with death when I was 17 – I went through surgery and chemotherapy for ovarian cancer. A lot of people thought that explained my lyrics, but I was writing about the dark long before I’d been there.” FACEBOOK, TWITTER.

The vocals are melodic and sensitive, the music adds some more energy to the song with its indie folk feel as 'April To Death' quickly establishes itself as one very catchy song. 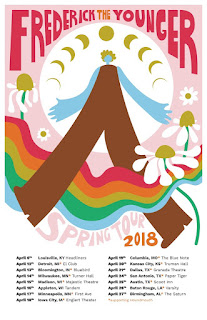 Background - Louisville’s acclaimed psych-pop band Frederick The Younger is hitting the road in support of Houndmouth in April. In advance of the tour, they're sharing their first new song in over a year, “Human Child II”, which is a full band interpretation of the title track to their debut album Human Child that came out last February. The original version of the song was performed solo on the album by their powerhouse vocalist Jenni Cochran, so the band decided to cut a full version after it went over well during live performances in the past year.

Frederick The Younger’s sound is a perfect balance of psych-pop and vintage rock & roll, with Cochran's captivating vocals always at the forefront, drawing comparisons to everyone from Janis Joplin to Karen O. Their album Human Child was produced by veteran sonic wizard Kevin Ratterman (My Morning Jacket, Andrew Bird, Twin Limb), and is a bigger and more exploratory progression of their debut Warm Front EP.

Comprised of Cochran, Aaron Craker (guitar, who’s also playing guitar w/ Houndmouth on these dates), Jake Hellman (bass) and Dave Givan (drums), there is an earnestness to Frederick The Younger’s music that rings true, the kind of sincerity only born from experience. These songs feel alive and well-lived, tragic, beautiful, and contemplative, all with solid hooks. WEBSITE, FACEBOOK.

It's over a year since were first introduced to Frederick The Younger and it is indeed a pleasure to be able to share 'Human Child II'. The psych elements are there again, along with some superb and dramatic vocals that add a level of mystery to the song, along with the creative and intriguing musical arrangement.