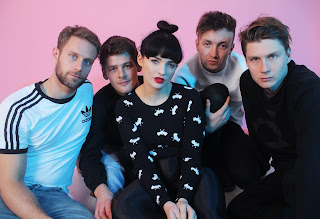 Having spent the last 18 months working on new material after drawing widespread acclaim from the online community and BBC Introducing, the five-piece are now gearing up for a hectic year with a slew of festival dates and releases in the pipeline.

Discussing their forthcoming single, the band stated: “Recently I think we’ve found ourselves part of a society divided by misinformation and distrust. The Wire is taking a look at the turbulent times we live in; the world’s never been so connected, yet it’s very easy to feel detached”. Produced by Alex Loring, Saltwater Sun’s The Wire is released via Hand In Hive (Dama Scout, Swimming Tapes, Zuzu) and is available on all platforms. FACEBOOK, TWITTER.

'The Wire' is a sprightly indie rocker with plenty of melodic hooks and some refined clarity from the musical arrangement, there are no passengers on this song as each band members commitment comes shining through. 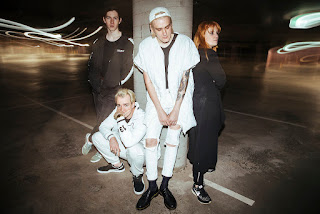 Background - The movement from depression into hope unraveled layers of complex cognition and a heightened creative determination for Sydney's Hedge Fund. But here they stand with their most confident single yet - 'True Romance' - their first to emerge following a year of personal turmoil for the group's frontman, self-proclaimed provocateur Will Colvin.

An immaculate melting pot of muscular post-punk grooves and dreamy synth-pop, 'True Romance' is a return to form for the band, rolling with heart and sparking with emotional rawness, think the likes of New Order, Talking Heads and The Cure. For Colvin, it came with a sizable helping of heartbreak.

"True Romance was written as a reaction to the death of my father and the breakdown of my marriage, the loss of the two most important people in my life in a very short period of time. The lyrics are about grief, frustration, failure and the lies that we tell ourselves about who we are as human beings. It's a song about being wrenched into a situation which caused an immense loss of faith in reality."

Recorded alongside longtime producing partner Richard Belkner at studio Free Energy Device in Camperdown, the pair went deep on this one, working hard to merge the pounding combination of bass, drums and vocals at the core of the song. The result - something between Nirvana and Blade Runner. FACEBOOK, TWITTER.

A chunky bass, accompanied by some determined and emphatic vocals open 'True Romance' a feisty rocker with hints of punk angst, backed by a band whose suppressed energy occasionally cannot be held back as they explode into a full on rock assault.