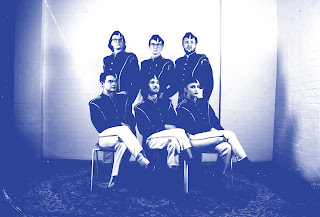 Background - Leeds-based six-piece, Team Picture have just shared their new single ‘(I Want Your) Life Hack’ released through Big Dumb Music Ltd. In line with sharing the new single the band have announced details of their Matt Peel-produced (previously Autobahn, Pulled Apart By Horses, Eagulls) 7-track mini-album ‘Recital’ (via Big Dumb Music), due for release on June 1, 2018. The band will support the release with a full UK tour throughout May and June, taking in festival dates at The Great Escape and Liverpool Sound City, before headlining The Shacklewell Arms, London on May 31, 2018 and The Brudenell Social Club, Leeds on June 1, 2018 - their largest headline show to date - full dates and ticket links below.

Split into two contrasting halves of three songs with a segue track running through the middle, ‘Recital’ is in part attuned to the band’s sagacious take on pop whilst also touching on their temperament for caustic guitar. Released earlier this year, ’(I Have a) Little Secret’ set the tempo for the first half of proceedings whereas new single, ‘(I Want Your) Life Hack’, finds the band delving into their fondness for post-punk sounds. Speaking about the new single, guitarist Josh says: “This is a Talking Heads song from an alternate dimension, performed by a bizarro-world version of the band, who have half the talent, twice the fuzz pedals, and are fronted by David Byrne's fictional idiot brother Malcolm.”

Since forming in 2016, Team Picture have earned praise at Radio 1, BBC Introducing and secured multiple spins at 6Music with support from Huw Stephens, Tom Robinson and Steve Lamacq, as well as ticking off support slots with the likes of Parquet Courts, Psychic Ills, The Orielles and Ulrika Spacek. In addition, the band have performed at the likes of Bluedot Festival (along with Warpaint and the Pixies), the Wire-curated Drill Festival and Manchester’s Neighbourhood Festival, as well as selling out their own curated ‘Du The Katman’ night at Leeds’ Hyde Park Book Club. A full UK headline tour including festival dates will take place throughout May and June, including stops at Liverpool Sound City, Brighton’s Great Escape and a headline show at London’s The Shacklewell Arms. WEBSITE, FACEBOOK.

A booming drum beat followed by a determined rhythm opens '(I Want Your) Life Hack' a creative song where power and eccentricity come together, in something that might be described as post punk or not as the case might be, whatever this piece is, it's wonderful! 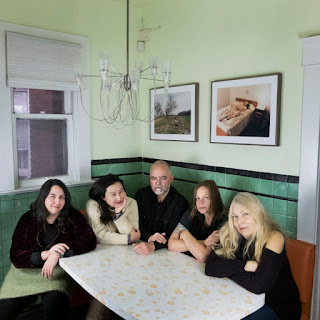 Long Branch recorded Found the Setting Sun at Noble Street Studios throughout 2016-17 in a series of sessions helmed by Executive Producer Gavin Brown. Co-produced by Long Branch and Shaddy Roman, the album gathers ten songs from the group's repertoire, and expands on the sound the band first introduced to audiences with their self-released 7" single, "Lucky Me/Just in Case" in 2015.

Dead leaves, bare trees, redemption, and resurrection are embodied in the fuzz-fueled guitars, violin, and vocal harmonies of Long Branch's sound. Formed in 2014, the band is stacked five-high with members from beloved Canadian combos, Adaptor 45, Chicken Milk, The Good Family, Shadowy Men on a Shadowy Planet, and Venus Cures All.

Long Branch's sound emerges from a solid guitar bedrock, with haunting violin voicings and the layered harmonies of the band's four formidable frontwomen supported by nuanced, driving rhythms. Introspective, moody, and evocative, Long Branch songs are narratives of overcoming hardship. Yet the songs are hopeful: A whisper of sadness appears one moment only to be blown away by grit and determination. FACEBOOK.

'Lilacs' is a charming rocker, where the guitars seemingly dual gently with each other as the vocals add passion and additional melody, all delivered with style, grace and just a little rock swagger. 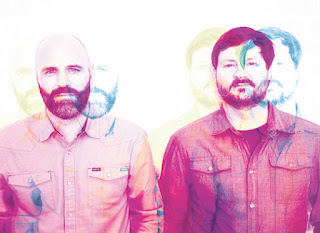 Leon III - Between the Saddle & the Ground.

Background - The principle members of Leon III (Leon The Third), Andy Stepanian and Mason Brent, span the space between Houston, TX and Richmond, VA, but their debut album reaches into a different kind of space, with psychedelic flourishes supported by alt-country and Americana tones their self-titled album, slated for release on Cornelius Chapel Records May 11th, looks to contemporaries like Khruangbin as much as it does to the Grateful Dead. With a rich cast of players including drummer Brian Kotzur (Bobby Bare, Silver Jews), pianist Tony Crow (B.J. Thomas, Andrew Bird), singer Jordan Caress (Laura Cantrell, Justin Townes Earle), guitarist Chris Scruggs (grandson of bluegrass legend Earl Scruggs), and pedal steel wizard Pete Finney (Justin Townes Earle, Kelly Willis), who joined with storied producer Mark Nevers (Bonnie "Prince" Billy, Lambchop, Silver Jews, Yo La Tengo) to help add texture and definition to these already sharply rendered songs. Leon III was the last album to be finished, top to bottom, in Nevers' Beech House Studios in Nashville before it was torn down.

Stepanian says that the first single "Between the Saddle and the Ground" "ties directly to a quote from some British history scholar from the 1500’s named William Camden;  “Betwixt the stirrup and the ground, Mercy I ask'd; mercy I found”.  I came across this line while reading annotated lyrics to the Grateful Dead song “China Doll”.  It was cited as influencing the line “yesterday I begged you before I hit the ground” from that song.   I was instantly intrigued with the concept implied in both lines - that it’s never too late for redemption and salvation and that it might even be found in the split second between the saddle and the ground presumably after being shot off of your horse.   I built the song around that idea.   Not the horses, but the redemption and salvation part.  I even dropped a line from China Doll “tell me what you done it for?” into the chorus as an homage or small thank you to lyricist Robert Hunter who wrote a large portion of the Dead’s lyrics. There is a lot of Grateful Dead behind the curtain of the entire record."

Leon III's album takes you for a ride, checking out “From These Heights,” a tune that falls in and out of focus like trying to read your phone after a few too many cocktails, woozy with the sound of pedal steel and the thrum of a mandolin. Right next door, “Paper Eye” meanders into psychedelic territory with the pulse of a synthesizer rubbing suggestively up against the sweep of a string section and some dub-like production touches. In addition, Leon III gives their own lysergic spin on “Jesus,” one of the signature tracks on The Velvet Underground’s 1969 self-titled third album, and find fresh insight in the song’s spiritual pleadings.

Taken as a whole, Leon III’s debut is a multi-dimensional ride through ten thematically interconnected and musically rich tunes. The songs are filled with dark corners and shadows but still have their share of sing along, anthemic moments. If Stepanian and Brent wanted to break from their alt-country past, they have clearly done so without wholly abandoning the idiom. In the process, they have paved the way for a diverse and varied future for Leon III. WEBSITE, FACEBOOK.

There is something of a southern rock meets alt rock feeling coursing through 'Between the Saddle & the Ground' a song engulfed in richness and passion, and some of that timeless rock & roll organic beauty. 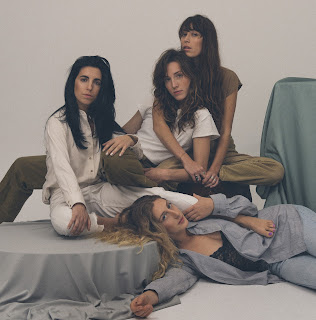 Background - Sometimes it takes time apart to regain an appreciation for what you have. At least, that’s what Frankiie experienced during the winter of 2016/17.

After three years, one EP, several tours, and a debunked reality TV show pilot, we began to question the direction in which we, as a group, were heading. Frankiie comments "Naturally, we began drifting towards individual interests. One of us started a fashion line while another released a solo EP. One became a school teacher, and the other moved to a small island community to work and surf. Despite these changes, it didn’t take long before our paths crossed once more – this time, with a renewed zest for our musical and adventure-seeking bonds".

Frankiie spent the past year writing new material and working alongside Jason Corbett (Actors) at Vancouver’s Jacknife Sound to finish up their debut full-length “Glory Me” and the forthcoming record’s first single/video. contemplates death, one’s self and the mysterious beauty of life.

Is our experience of death a true reflection of how we lived? Like many tracks on the album, it explores the questions of meaning and purpose – feelings that heavily shadowed our lives before we took time for self-discovery. FACEBOOK.

'Glory Me' is a glorious song (excuse the pun) with hints of sixties all girl group splendour and a modern lush musical arrangement. It sounds like taking time out has been a good move, especially if you can return with music of this calibre.