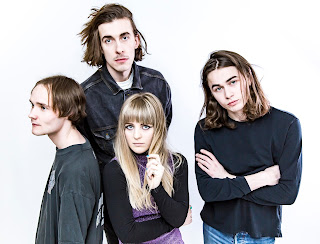 Thyla - I Was Biting.

Background - Brighton’s emerging indie juggernauts Thyla launch their sprawling new single I Was Biting, capitalising on an exhilarating start to 2018 that’s seen them tipped for major success at both press and radio.

Spotlighted alongside Pale Waves, Nilüfer Yanya and Sorry in NME’s 100 Essential Acts for 2018, the post-punk outfit have since finished their first ever UK tour supporting Inheaven, drawing rave reviews and attracting plenty of fanfare across the country.

Named by Huw Stephens (Radio 1) as one of his Alternative Tips for 2018, the four-piece undeniably live up to these expectations in this intense new offering. Lead by frontwoman Millie Duthie’s soaring vocals, the band’s limitless potential is exemplified once more in a collection of sky-scraping hooks and gripping guitars bursting with fury.

Discussing the single, the quartet stated: “I Was Biting is about dystopian aspects of modern society and a discontent for it. We talk about a unanimous feeling of anxiety and a desire to live in a fictional state of our own dreams; to escape from the mundane routine and expectations of society”.

Following on from our first feature for Thyla back in December we now have the new track 'I Was Biting'. It's another stylish dream pop/rock song with a mixture of melodic vibes and some rock potency, all bound together with some fine production. 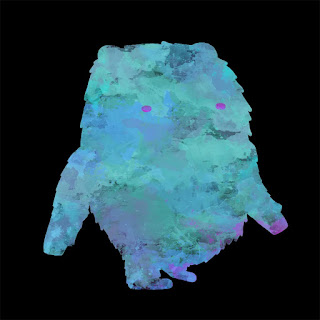 Background - 2017 saw the birth of Leeds based indie/rock clique Mugen. The band have been biding their time, perfecting their craft and carefully constructing a beautifully thought out musical and visual pairing, staring ‘Mugen’ the hedgehog.

'Mugen' himself has an indulgent drinking and smoking habit, and is a hedgehog who traverses the terrain of the human world as a personification of lead singer, and songwriter Harry Kinchington. Mugen personifies Harry’s vision to create something that is a conceptual character falling alongside his passion to release music, that is just that little bit different whilst also raising the question #whoismugen ?

Off the back of their first release ‘That Ain’t The Way It Is’, Mugen received extensive support from Record of The Day, BBC Introducing, Xune Mag, and further afield have been playlisted on New York’s WYNR, Italy’s Primantenna FM and Radio Galileo, alongside France and Switzerland's LRDR as well as New Zealand's Radio Active 88.6FM, and Radio 1. FACEBOOK.

A smooth flowing indie rocker 'Going Down' has some engaging vocals and understated harmonies that stand out above a refined musical arrangement, and it's all rather catchy. 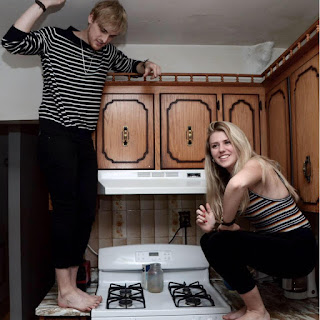 Background from Freedom Baby - We've been overwhelmed with the support for our new project. This track we wrote without any re-writes. We had not intended theme or subject matter when we began writing and it all came together as it wanted to.

In a way the song is reflective of life, in that it poses many unanswered questions, asking the listener to decide its’ meaning.

The video furthers this feeling of duality as the mirror reflects back on the viewer and the listener. For us this song is about the end of the world, but maybe it’s about the beginning of it too. BANDCAMP, FACEBOOK.

One of four tracks on Freedom Baby's forthcoming EP 'My Force' showcases the duos beguiling music as it gently builds into an addictive song where the hooks dig deep. We featured them in August 2017 and were impressed then, this is even better, Freedom Baby have something very special going on here. 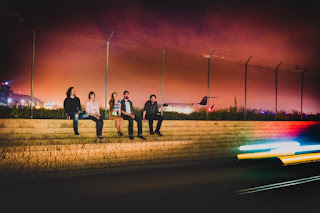 Background - Ghost Pressure mixes elements of alternative-rock and pop, drawing influence from acts like Wolf Alice, Warpaint, and Metric. Forming in 2014 as a four-piece, the last couple of years have been the band's biggest yet.

2016 brought the addition of vocalist Lauren Diehlmann -- whose impressive vocal range and affinity for polyphonic songwriting has helped the band evolve sonically -- and 2017 saw the release of a live EP and a new single, an expanding tour schedule, and a support slot opening for Gin Blossoms.

'Sunless Dawn' opens quietly enough, then erupts into a more powerful rocker, where the vocals are gorgeous and deliver a melodic element above the tightly delivered rock soundtrack. Very impressive! 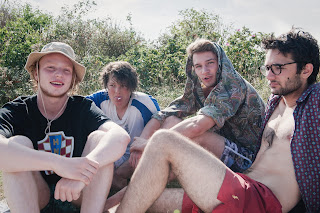 Canshaker Pi - Put A Record Out.

Background - Canshaker Pi have just announced that they’ve a new record on the way and premiered a taster from it with Put A Record Out.

After impressing many at their Eurosonic performance at the start of 2018 and supporting names such as Car Seat Headrest and Parquet Courts, to local friends Pip Blom, and indie legends The Cribs, the band have absorbed all the skill that surrounds them and poured it into the new record.

The Amsterdam quartet burst into the world of indie-rock at such a young age and yet have been no strangers to the more mature sounds of Pavement - in fact, Stephen Malkmus helped to produce the band’s debut LP and in 2017 they toured 15 countries and played 27 shows with Scott Kannberg’s Spiral Stairs. FACEBOOK.

Canshaker Pi are another band making their second appearance on Beehive Candy today. The new track 'Put A Record Out' is a feisty indie rocker with some fabulous "in your face" power and some seemingly decadent vocals that add even more attitude, it's one of those songs that just begs to be played at full volume...