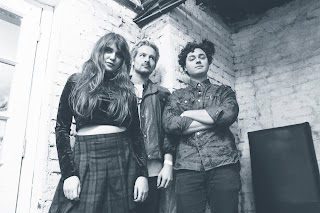 Background - Raucous garage rockers Calva Louise share the visuals for their deafening anthem Outrageous, further reiterating their unbridled potential ahead of a series of eagerly anticipated dates on the festival circuit throughout the summer months.

Having feverishly honed their craft within London’s thriving punk scene, the trio (one part Venezuelan, one part Māori and another part English) have since toured with Spring King and Anteros, receiving widespread praise for their tenacious live shows in addition to considerable BBC Radio 1 and BBC 6 Music airplay.

Crammed full with skyscraping riffs, sumptuous harmonies and frontwoman Jess Allanic’s biting vocals, the band have earned plaudits throughout the online community for their latest effort and will be supporting Albert Hammond Jr in London this September.

“The video for Outrageous shows (sort of) what it’s like to be in a band for us”, the three-piece stated. “As a band with no money but with a lot of willpower, we’d go on adventures in our tiny old car, going from London to Berlin to Glasgow, facing, at first, a lot of struggles but always having the maddest adventures and all kind of challenges. In the end, nothing really gets easier, but it does get funnier to experience!” TWITTER.

Garage rock with a truck load of attitude 'Outrageous' is a determined blast of lean and mean music, where the vocals almost threaten you to defy listening to the end. As for the video, every conceivable element of the song is visually translated, leading to the thought that car rock might now officially be a sub-genre of garage rock! 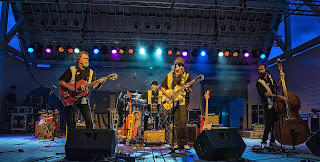 Together, the quartet set off to deliver their high-energy, feel good vibes all over Virginia and down the coast, playing alongside The Screaming Rebel Angels and opening for Rev. Horton Heat and Big Sandy and tearing up big stages such as the Gretsch stage at Lake Havasu Rockabilly Reunion (NV), and the Rats Nest Run Inn (NY), and the Americana Music Fest (Virginia Beach).They released their debut self-titled album in 2015 and quickly followed up with a second album was tracked in a feverish all night session at Sun Studios in Memphis in May of 2016. Both releases were praised by the rockabilly community and found airplay on radio stations around the world, eventually landing them a feature in Rockabilly Deluxe Magazine.

While their music might be perceived as nostalgic, the band is aggressively pushing the genre forward with contemporary influences. Their forthcoming album, Lonesome Lagoon, may elicit hang tens, banana palms, gogo boots and Ennio Morricone scores, yet it is structured in a way that feels fresh and current - a modern take on the classic rockabilly surf sound. WEBSITE.

The first of ten tracks on the forthcoming 'Lonesome Lagoon' album is 'Spanish Shore' a gorgeous and timeless roots rock instrumental. If this works for you, then prepare to devour the album, where rockabilly and old style rock and roll is produced to an exceptional standard of musicianship. Varied and crafted and with that all important level of energy and feeling, both old and young folk can fall in love with this music.