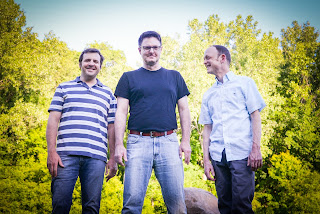 Power pop/indie rock band, The Persian Leaps have just shared a new video, created by Rouse Productions for “Time Slips” the lead single from the recently released album Pop That Goes Crunch. “The Persian Leaps” began as a phrase singer/guitarist Drew Forsberg doodled in a notebook margin during a college Greek Archaeology course. He wrote music independently under that name for years, until finally assembling a full band in 2012 to perform and record driving, chiming music influenced by My Bloody Valentine, The Smiths, Guided by Voices and Teenage Fanclub.

The Persian Leaps have adhered to a disciplined schedule of concise releases: each fall bringing an EP of five songs totaling fifteen minutes or less. In 2013, the Persian Leaps released their debut EP Praise Elephants, which NME Magazine described as a “celestial guitar jangle”. The band completed a follow-up EP Drive Drive Delay in 2014, praised by XS Noize for its “instantly catchy melodic harmonies layered on top of droning guitar.” In 2015, the band released High & Vibrate, an EP championed by The Big Takeover for its “big-time hooks, upbeat attitude, classic power-trio punch.” 2016 saw the release of Your City, Underwater, which earned a spot on The Big Takeover’s Top 30 EPs of 2016. In September of 2017, the band’s fifth EP Bicycle Face was delivered yet again to fan and critic praise. Named for a 19th-century medical condition concocted to scare women away from biking, Bicycle Face was described as a “perfect power pop cocktail” by 50thirdand3rd.

This year brings the band’s first full-length release titled, Pop That Goes Crunch, an 18-song “best of” anthology. With 17 remixed/remastered tracks, and one new single, it marks the end of an era, while celebrating and revisiting some of The Persian Leaps best work. It is available now via Land Ski Records.

'Time Slips' is the third song we have featured by The Persian Leaps in as many years, this time around we have a new video (the lead single) from their current album. The trio serve up another glorious helping of power pop with plenty of natural rock and roll edge, something they consistently do with apparent ease. 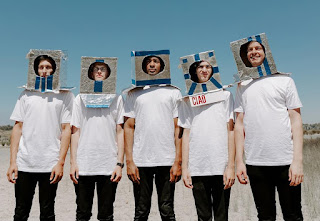 Young Robin drop blissful new single 'Spaces' accompanied by a video. Young Robin are progressing so fast that it's exciting to watch – anticipating what they're going to do next, only to have those expectations surpassed. A band with an innate knack for hooks, Young Robin craft a beautiful sound that is somewhere between blissful indie and dance floor anthems. Fittingly, their latest single, the mesmerising Spaces, is both. Equal parts groove and melody, Spaces is the follow up to single U from the band's stellar EP, Transitions.

Built upon a rhythm you can't sit still to, Spaces is a delight for the ears with its perfectly-placed layers of delay-soaked guitar, bass, and effortlessly smooth vocals by both Jed Begho and Ben Teune. Playful and euphoric, Spaces feels like summer in Perth – as if the band have distilled the excitement of their beautiful hometown down into a singular burst of energy.

This is due in no small part to award-winning producer Andy Lawson, who has sculpted the Transitions EP masterfully – capturing the band's energy like lightning in a bottle. Bringing each vivid layer of the band to life, giving every instrument its perfect place in the mix, the combination of Young Robin and Andy Lawson has allowed each song to reach its full potential. Transitions is the band at its best and the remixed single Spaces elevates their sound to a new level.

Less than a month ago we shared 'Faker Faker' from Young Robin and they quickly return with 'Spaces' another bright refreshing indie song where every element shines through with aural delight and a fine new video that adds even more sparkle (we're starting to sound like a washing powder advert so I will leave it at that)....