April 29, 2019
'Imprint' from Fanclub is a beautifully flowing song with appealing vocals and a finely arranged musical back drop. With their music aptly described as Punkgaze, Blaire give us 'Mimer' a distinct and hook filled song that helps explain their musics description. Gothenburg’s Beverly Kills might have created a stir locally, however 'In This Dim Light' might well be bright enough (pun intended) for their music to get noticed far and wide. We have the A side and one of the two B sides from Mystery Art Orchestra's new single as the Berlin based band demonstrate just how good their take on post punk music is! 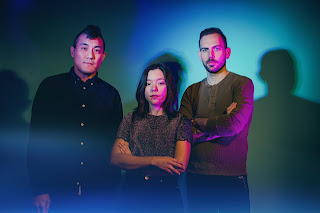 Fanclub have just shared their new single "Imprint". Fanclub is Mike Lee, Leslie Crunkilton, and Daniel Schmidt from Austin, TX. Mike and Leslie immediately knew they wanted to craft songs driven by their love of all things twee, indie, and dreamy.

What they didn’t expect was that the songs would come out as the most mature and dazzling things they’ve ever worked on. What they also didn’t know was that Fanclub would give us a distinctly new sound that is also so incredibly nostalgic.

On the heels of their debut EP release with already over half a million streams, they want to further craft songs that find hope in the melancholy and bring that same sentiment on the road. With more and more tour dates being announced, hopefully you’ll get to see for yourself. 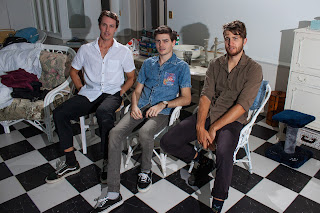 Building a kingdom of textured and multifaceted guitar music—brilliantly labelled as punkgaze, Blaire creates sonics that is both visceral and maligned, maximalist and minimal. Hidden behind an explosion of layered guitars and noise lies subtlety and beauty—something Blaire have come to perfect in their two-year career.

Blaire is proud to release the new single into the world. After turning plenty of heads last year with two astounding tracks, 'Youth' and 'Smiling', Blaire's new track, 'Mimer', is out today via GD FRNDS.

Blaire has never sounded so polished and forward. Their pretence of sweltering punk swashed underneath a shoegaze current remains omnipresent, though embeds itself in a dichotomy of deepened pop movements. Using a synth for the first time in a Blaire track, there was a conscious effort to make a dreamy and otherworldly vibe on 'Mimer'.

Sparked by the passing of a family member, Blaire frontman Ben Stagg constructed a contrast of "efflorescent dreaming" and "ephemeral nightmares" to deal with or distract himself in that time.

"Mimer takes a look at the idea of distance," explains Stagg. "Whether that be a friend who lives far away, someone who's passed, a favourite place, country, anything. It is a reflection on the fact that you can still feel whatever's missing from you in a range of ways, and can be 'mimed' by something else." 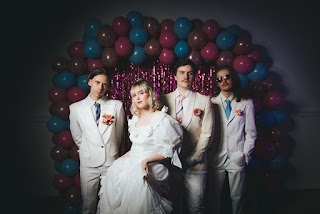 Beverly Kills - In This Dim Light.

Beverly Kills are creating an impressive name for themselves as one of Gothenburg’s up and coming bands to watch. Last year saw the band release ‘Fourteen’, ‘Melodrama’ and ‘Dreamless’, gathered great acclaim from both local and international press including being mentioned as one of the “Best Swedish Indie Debuts 2018” by HYMN and being nominated for "Breakthrough of the Year” in the Gaffa Awards. This also saw the band playing Gothenburg music showcase festival Viva Sounds and a side show at this years by:Larm Festival along with shows supporting Agent blå, Moaning(USA- Sub-pop) and Västerbron.

The release of ‘Revellers’ earlier this year came with the announcement of their debut physical release ‘In This Dim Light/Melodrama’ limited edition 7” vinyl through Australian Indie label Hell Beach. ‘Revellers’ received a plethora of editorial support among being added to Spotify’s Fresh Finds playlists, featured in Hype Machines most blogged charts and saw new live dates including taking the stage at this year’s SPOT Festival and shows supporting Terra and Westkust. ‘In This Dim Light’ signifies a new era for Beverly Kills as they join the Welfare Sounds roster, aligning with amazing fellow label artists such as Linn Koch Emmery, Terra and Tyred Eyes which is set to propel the band forward into a future that is looking very bright.

‘In This Dim Light’ may be Beverly Kills most compelling single to date and further encapsulates the bands signature sounds as they suck you in with dreamy and infectious hooks then spit you right back out with raw and thumping energy.The initial tone of the song is set by Alma Westerlund’s beautiful vocals that flow effortlessly over melodic, dreamy synths which is then completely augmented as Viggo Mattson and Hampus Höggren lay down a powerful stomping rhythm section that propels the song into full motion.

As the song builds towards its final climax, John Jonsén’s punchy and articulate guitar performance carries the song through sections of tension and release as the band artfully blend raw and energetic sonic landscapes with dreamy lush vocals. Lyrically, Alma poetically reflecting on the type of people who compulsively start talking about their exes after they’ve had a drink or two, ending up ranting about them for the rest of the evening, almost as a process of self-purification.“A gray wall can become a sky or an ocean if you look close enough, we played an eye for an eye and you took them both”. ‘In This Dim Light’ clearly demonstrates Beverly Kills song writing prowess and further establishes their emergence in the ever-exciting Gothenburg indie scene. 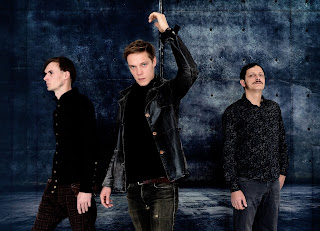 This cheeky new EP contains three new tracks and comes with an emergence of new darker sounds. Light-minded or not, fragments of sounds are the only form that Mystery Art Orchestra trust. Measured against the east german landscape of their hometowns, its only slightly sentimental.

Hypnotic, disruptive and sometimes strangely familiar, almost as if different musical decades have been torn apart and stitched back together in unexpected ways.

"If you like blurry guitar sounds, melancholic vocals and long stretches of instrumentals lining your car rides, lonely walks or meaningful stares out of the windows, you’ve reached the right address with Mystery Art Orchestra"