November 06, 2019
The Golden Age of TV have just released a new single 'Caught In Doors' ahead of their self titled debut E.P. We featured them back in early 2018 and the new release is more than welcome as the bands distinct and oh so likable musical construction really stands out. ===  LIFE have released a video for their fabulous album track 'Excites Me' a song that does just that, excites and rocks as well. === We have a video from Fruition for 'Wild As The Night' a beautiful and touching song that is melodic, as both the vocals and musical arrangement shine brightly. === Rebekah Rolland shares two songs on 'Mary / Louise' where the Arizona musician and songwriter is a delight to listen to, her lyrics, vocal delivery and music are somewhere special on the Americana spectrum. === We had the pleasure of featuring Flora Hibberd a couple of times earlier this year and are really pleased to share 'As Long as There is Night' taken from her new E.P, as once again her folk music is just so engaging.
------------------------------------------------------------------------------------------ 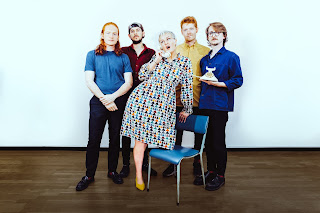 The Golden Age of TV - Caught In Doors.

Making a name for themselves over the last couple of years with incisive, off-kilter guitar lead gems, the five-piece are stepping it up a level in intensity. Frantic drums and guitars usher in vocalist Bea Fletcher’s imperious, hushed vocals. It’s an exercise in sustain and release, the temperature rising throughout, pushing and pulling, before a chaotic reprise. Sound wise, it occupies a similar space to bands like Orchards, The Big Moon, Sports Team or Bombay Bicycle Club.

It’s thematically very relatable. Being trapped in an unwelcome situation can lead to frustration, listlessness or friction if left unattended, which is what the tightly-wound tune is trying to express – Bea elaborates: “‘Caught In Doors’ is the feeling of being stuck in one place, struggling to move. Financially, socially, in a career - whatever it is, it's about the need to switch up your routine or change your image. In the chorus, seeing my hair "collecting in piles" metaphors that build up of an itch for change.”

Over just a few releases the band have managed to impress numerous key tastemakers and steadily build a following. Huw Stephens at BBC Radio 1 is a fan, to go alongside support from 6 Music, BBC Introducing and Amazing Radio. Press wise, early takes have come from DIY, Clash and The 405, with the buzzy blogosphere also propelling them to indie attention.

The live side too has seen exciting opportunities for the group. They’ve performed at Reading and Leeds, Live at Leeds and Liverpool Sound City festivals. ‘Caught In Doors’ was produced at Greenmount studios by Lee Smith and Jamie Lockhart (Alex Clare, The Cribs, Submotion Orchestra, Pulled Apart By Horses), and is out now. 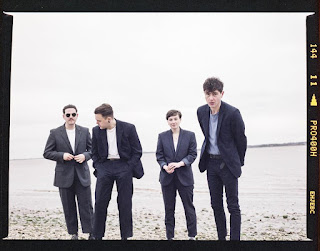 Following the release of their critically acclaimed second album ‘A Picture Of Good Health’, a recent A-listing on BBC 6 Music for ‘Hollow Thing’, a blistering BBC Radio 1 Maida Vale session for Jack Saunders and a packed out album launch in a Camden kebab shop, Hull outfit LIFE have shared a new video for album track 'Excites Me'.

The animated, stop-motion video was directed by Manchester/York based artist Callum Scott-Dyson who says, "For 'Excites Me', we really wanted to do something manic and full of energy to match the pace of the track, while also develop a loose narrative that echoed some of the ideas in the song and lyrics. What started out as a more vague thing based around wanting to escape boring situations and explode with pent up rage, became a bit of a character piece about a man stuck in a boring job with lots of mundane things going on, who has to do something crazy to escape this life. Then the narrative gets crazier and crazier as his inner demon comes out and he grows into a rage filled monster." 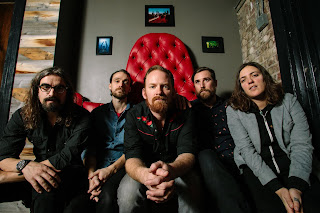 Fruition - Wild As The Night.

Portland-based roots-rockers Fruition new record Wild as the Night releases Nov. 8th. This 7-song collection of new music showcases their honest song-crafting skills and individual musical talents in a blend that could only be forged from years of playing together. The record conveys the emotions of our darkest, and sometimes weakest, moments.

The album’s first single, “Wild as the Night,” provides perhaps the album’s most beautiful moment, with vocals from Naja evoking the midnight grief from letting go of a relationship.

Wild as the Night opens with the rollicking and pulsating “Forget About You,” setting the tone of the record as a whole; commiserating in sorrows and lifting spirits. “Sweet Hereafter” follows the album’s self-titled first single with an entrancing drum and piano loop that could be equally at home on a James Blake record. The organic beat gives way to thick repeating harmonies, leaving the listener wanting more after a subtle fade to silence. The album picks back up, tempo-wise, with a quick rock and roll study in city living with “Raining In The City” before it dives back into more classic Fruition territory with a campfire celebration of the Oregon Coast in “Manzanita Moonlight.” “Don’t Give Up On Me”’s seductive groove dips back into the commiseration with the final verse lamenting, “All the world is just empty without somebody to love.”

Recorded at Silo Sound Studio in Denver, Wild as the Night captures the band’s mindset in the midst of relentless touring. “We were exhausted, but musically firing on all cylinders,” says Thompson, who shares production credit with the band on the new project. “It’s extremely diverse Americana, with a focus on great songwriting and harmonies. We weren’t going for a particular sound, just something that’s honest to our live sound along with a few tricks we learned from our last producer, Tucker Martine.”

With a renewed focus on harnessing the energy of the live experience, Wild as the Night allows listeners to get a glimpse of these longtime friends doing what they do best on stage, whether they’re opening for the Wood Brothers, Greensky Bluegrass, and Jack Johnson, or playing at festivals like Telluride Bluegrass, Bonnaroo, and DelFest. 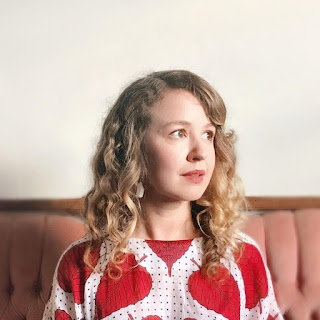 Rolland steps into a new season with Mary/Louise, bookend to her 2018 debut solo release and prelude to upcoming collaborative songwriting project with longtime partner and bandmate, Matt Rolland. Rolland and Rolland co-produced the pair of songs that feature Rebekah on vocals and piano, and Matt on fiddle, acoustic guitar, and electric guitar. Rounding out the recordings are Thøger Tetens Lund of the acclaimed Tucson desert rock band, Giant Sand, on upright bass, and Josh Carruthers on drums and percussion.

On writing Mary/Louise: “I remember passing between two rooms of my grandma’s house through a very narrow hallway. The first was the kitchen and dining room, where her whole life was concentrated into one small, low-ceilinged, and shadowy space. The other was the great room on the other side of the house with a whole wall of windows and a grand piano in one corner and a player stand in a sunny alcove.

This room sat empty and still most of the time, but we gathered there when everyone was in town. I think my grandma spent most of her life in this way—passing from a dark and secluded place into a lighter one, where the view was long and weight of the walls around her evaporated. Mary / Louise came out of an old picture of my mom and her sister in front of the house, and of my own memories of passing through those rooms and hallways. It means so much to share it now and I hope it finds you where the sky is high and the day is close.” -Rebekah. 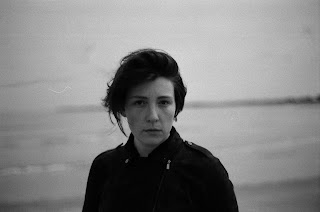 Flora Hibberd - As Long as There is Night.

Born in East London but currently residing in Paris, Flora Hibberd has been described as ‘intelligent and measured…there is a profound intuition in her work’ and her songs as ‘deeply rooted in the timeless lyricism of Dylan and Cohen.’ With influences as diverse as Nick Cave, Joan Baez and Jacques Brel, she moves effortlessly between acoustic folk traditions and the bruised indie of PJ Harvey, Jason Molina and Cat Power. Her powerfully emotive voice, evocative melodies and poetic lyrics combine beautifully to give her songs a deeply haunting and unforgettable quality.

Flora’s first two singles ‘The Absentee’ and ‘In Violence’ released in earlier 2019, were bold statements of intent and announced her as a powerful newcomer. The songs’ complex, dark melodic and lyrical beauty have left a longing for what The Absentee EP will offer. The EP packages the singles with two new gems, ‘As Long As There Is Night’ and ‘The Healing’ that will not disappoint.

About The Absentee EP, Flora states ‘The songs of this EP emerged over months and years, and were refined in bars, apartments and on the streets. The Absentee was written fifty metres below the English Channel, three years ago. In Violence was written in 2017 in the garden of the Musée Rodin. Their influences are too many to name; random encounters with poetry, art, music and language in all its forms have bled into my writing in ways of which I am often unaware. They are about real people and real events. But they are also about impossible people, and impossible events. My hope is that they find you here, on the blurred edge between reality and dreams, in the half-awake place where the familiar merges with the unknown. ‘

With this EP and in collaboration with producer J. C. Wright, bringing his 'spectacular’ arrangements and atmospheric brushstrokes, Flora Hibberd is laying down an impressive artistic foundation. The Absentee EP is out now, on ClearLight Records / Declared Goods.