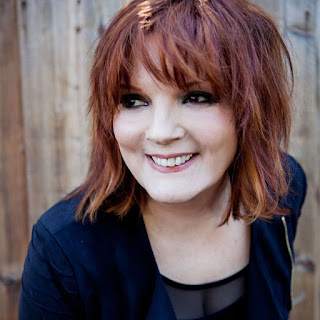 Acclaimed singer-songwriter Eileen Carey unleashed her latest romantic single “Finally” in November and follows it up with her breathtaking music video. In creating the music video, Eileen Carey worked alongside her longtime collaborator producer-director Taner Tumkaya. Depicting a journey towards love, the stop motion animated music video is timeless and captivating.

With her single “Finally”, Eileen Carey amplifies those emotions we can’t describe with crystal clarity. “Strong emotions sometimes cry out for strong language,” Carey asserts. “These lyrics state in the plainest possible way what we feel but may be hesitant to say.” “Finally” also follows the international success of her chart-topping single “Meet Me Halfway”, released in May 2019. Both singles continue with Carey’s positive, uplifting musical style as well as her trademark take on love.

Currently, Eileen Carey is excited to share her vision for her single "Finally" with the official music video release. To continue through music, she will also be dazzling on stage with her band alongside Jefferson Starship on February 6th, at The Rose. Be sure to check out her social media for all details on her upcoming performance.

Originally from Ohio, the California-based Eileen Carey has become a staple cross-over artist in various genres such as Country, Pop, and Rock. She has shared the stage with renowned acts such as Wilson Phillips, Don Mclean, Jefferson Starship, Rita Coolidge, The Motels, Albert Lee, Johnny Rivers, Peter Noone, and Tal Bachman. 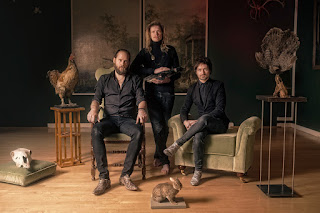 Songs To Make You Move is the title track of the upcoming debut album by Certain Animals. From beginning to end it's a pounding, steamy rocker that sings about the good things in life. The band chants through the layers of fuzz about things that make life worthwhile for them: (animal) friends, a good glass of jajem at sunrise, sweat stains in your clothes after a killer show, the relief of pain in your bum, but mainly the power of music.

In a polyphonic and catchy chorus, the band emphasizes that whoever you are, or whatever you like, a good piece of music moves you and makes you move mentally and physically. When after two and a half minutes a sound starts that can easily compete with the roar of a concorde taking off, the listener can only move along with it.

Rotterdam based trio Certain Animals serves you melodic rock filled with vocal harmonies. The members aren't afraid to show which records they've been listening to. Musical giants from the 60's and 70's are spinning on their turntable on a daily basis. The Beatles, Beach Boys, Neil Young, Crosby, Stills & Nash and Electric Light Orchestra are regular companions in their musical life, but also the fuzzy and phasey sounds of contemporary bands like Tame Impala influence the music of Certain Animals. Without being stuck in the past and with a critical view on the present, the band brings you their intriguing sound which makes for an energetic live show filled with intimate moments and explosive bursts of energy.

In less then three years, the band managed to build a strong live reputation by playing shows on major Dutch festivals in famous venues all over the country. After having played across the border in Belgium, more international gigs in Germany have been confirmed for spring 2020. 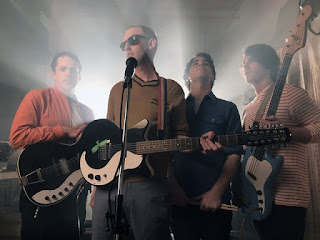 Ahead of the January 17th world-wide release of their highly infectious debut album Football Money, Kiwi Jr. have shared a video for the LP’s "Gimme More."

Of the video the Toronto-based band say, “it was shot mostly at our favourite bar in Toronto - Black Dice Cafe. It's a rockabilly bar and though Kiwi Jr is very unhip to that scene, we tried to pay it justice by wearing leather jackets. We've had probably every band meeting we've ever had at that bar, and the owner Hidecki was nice enough to let us shoot there as long as we didn't break anything (which we did during load in before we even started shooting).” It was directed by Sean Foreman who states, "we wanted the video to feel like it was based off dream logic. Things don’t make sense, the band keeps popping up, rooms are oddly connected somehow, it’s nonsense but at the same time there seems to be some undercurrent of reason guiding things."

Previous to today’s video Kiwi Jr have shared the album’s title track and “Salary Man.” Football Money will be released world-wide via Persona Non Grata Records (following debut EP by Pip Blom). The album had a Canadian release this past March on Mint Records. The album was engineered by Aaron Goldstein, and mixed by Holy Fuck's Graham Walsh. The band have been confirmed to play SXSW in Austin, Texas in March. Before that, they'll head over to the UK for shows in Bristol, Leeds, Manchester and at London's Waiting Room on January 29th 2020.

All natives of Charlottetown, Prince Edward Island, Kiwi Jr. are now based in Toronto and much of their songwriting is informed by the city that surrounds them. They have spent the last 5 years honing their craft both in the studio and live, including opening spots with Wolf Parade, New Pornographers and Alvvays.

Football Money was recreated at high volume on stages across Canada; a dispatch stitched out of fragments, a lustrous twelve-string paint-job unraveling ten book smart tracks in under thirty minutes. A product of two years of labor, a monument to work-life balance, the record is not unattractively scarred by its circumstance: recorded by nightfall in dormant studios, friends and enemies drafted as backup singers and engineers, the LP untidily fuses the yin of work with the yang of life, chronicling a dual-existence, unkempt instrumentalists moonlighting as under compensated administrators by the harsh fluorescent light of day, borne back ceaselessly into the Greater Toronto Area by night. 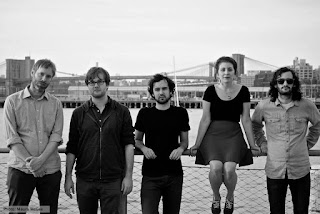 Green and Glass - Gabriel.
Green and Glass are an avant-pop group from Brooklyn led by harpist and vocalist Lucia Stavros, and flanked by multi-instrumentalist Sam Decker (Secret Sibling), trumpeter Andrew McGovern (High and Mighty Brass Band), drummer David Flaherty (Cuddle Magic), and bassist Ryan Dugre (Landlady). On February 14, the band will release their self-titled debut album on 11A Records. Their latest single, "Gabriel," premieres today at Post-Trash, who've called it "a majestic pop song that soars far beyond this realm."

On Green and Glass, glimmering synth ballads sit alongside powerful rock epics, with Stavros’s forceful vocals providing vitality and soul. With multiple songwriters and an eclectic instrumentation -- harp, synths, and horns set against drums and bass -- the band draws from disparate influences, but keeps melody at the forefront. The horns (played by McGovern and Decker) alternate between sublime and razor-sharp, and amplify the mood of each moment, while harp and synths float high above the drums and bass (played by Flaherty and Dugre) to create a driving orchestral sound. At its core, Green and Glass is a collection of songs both direct and mysterious, simple and complex; a car ride in a dusky town, a dream full of dizzying light.

In a statement to Post-Trash about "Gabriel," the band shares: "'Gabriel' is about a figure that follows you around, absorbing some of what the world throws at you, like a hobbled guardian angel. Slightly mysterious, and always in the peripheral, it depicts an avatar of the mundane and profound. A pastoral epic, with perhaps the broadest scope of any song on the record, Gabriel finds its center in the interwoven guitar and harp ostinato which serves as the base for layers and layers of sound, all moving toward the joyous final chorus which is equally bright and heavy."

"Gabriel" will be available as an instant grat track with pre-orders of the album via Bandcamp. Green and Glass will be released on February 14.