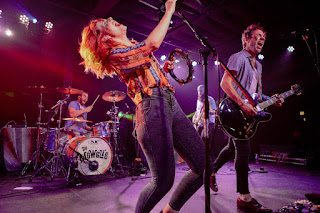 We have the new visuals from The Mowgli's. Entitled "Wasting Time", the song details the struggle to find meaning in life.  Joshua Hogan confides "We all want to do something meaningful, but we don’t always figure out how. This song tells the story of being lost in a repeating loop of every day routine and the fight to keep moving forward." 'Wasting Time' features bold pop melodies, dreamy synths and driving rhythms. The Mowgli's have garnered over 150 million streams on Spotify alone and are about to embark on a U.K. tour.

All of life is a journey and the best journeys are those taken with friends. For the 5 members of The Mowgli’s that road has seen their friendship tested and rebuilt numerous times. From their earliest Venice, California days as a 10+ revolving cast of characters to their current line-up, the core members have evolved from playing midnight warehouse parties to the stages of the largest festivals.

While there have been many highlights - appearances on late night TV shows, incredibly rewarding collaborations with charities and electrifying performances in legendary venues among them - there have also been tests: Losing band members, battling with the stress of constant touring and maintaining their friendship, trying to remain both grounded and optimistic when things go amazingly well and when they don’t. But there have been benefits of creating deep bonds and close relationships, not least the marriage of singers Katie Jayne Earl and Josh Hogan in 2017. “Being in a touring band is hard work,” says Katie, “but inspiring. It only works because people care about the band and we have a core who support us, people who have both been there since the beginning and joined along the way. Those supporters keep us motivated.”

The release of The Mowgli’s first major-label LP Waiting For The Dawn in 2013 saw immediate success with the hit single San Francisco. The record - which focused on the joy of bringing people together - immediately connected in a cynical world. The band quickly found themselves playing to sold out crowds in clubs around the US and inundated by requests for press, sponsorships and partnerships. Appearances at Bonnaroo, Lollapalooza, Firefly, Osheaga, Bottlerock and many other festivals followed as did performances on The Tonight Show, Jimmy Kimmel Live, Conan and a stint as the SXSW House band for Andy Cohen’s Watch What Happens Live (Bravo)

The follow up LP, 2015’s Kids in Love (which spawned the feel-good single I’m Good) saw the band explore personal relationships including their own inter-band ones, and their third LP Where’d Your Weekend Go? which came in the Fall of 2016, often found the band working on songs together from their very inception - giving much of the record a relaxed and communal feeling.

Parting ways with their original label in 2017, The Mowgli’s released a pair of EPs: I Was Starting To Wonder (2018) and American Feelings (2019), each backed by national US tours and both exploring the “band experience” to a large extent. The first EP focused on travelling, missing home, looking for excitement in the daily churn of a tour, finding it in the back alleys and on the rooftops of America. The more recent EP American Feelings turned more towards relationships and connections, noticeable in Talk About It and Mr. Telephone which both harken to the lack of discourse and engagement prevalent in society today, especially with technology serving as both a facilitator and barrier. Says singer/guitarist Josh Hogan, “Communication is a very powerful tool. If we could learn to communicate in a healthy way, this place would be much less divided.”

Katie adds: “Talk About It started out being a song about communicating your way through difficult situations, but as it evolved, it became a song not only about having hard conversations, but about forgiveness. And it’s really special to me.” Whereas those songs look outwards, Hard To Love and Norman Rockwell focus inwards, taking a critical look at emotional failings in the former, and attempting to create a new reality to escape to in the latter.

“…Wonder” was supported by a deliberately small club tour. “It was exciting to get back out on the road, up close and personal with our fans who have stuck with us from the beginning,” says Katie. “We took a really needed break after [Where’d Your Weekend Go?] - after years of almost non-stop touring.”

“It was a relief to get back on the road and do something a little different for that tour,” adds Josh.

The band also travelled to Honduras and Guantanamo Bay last year, entertaining the Armed Forces during the week of July 4th. Truly an eye-opening experience, the two shows rank as unforgettable for the band. “You get that sense that people are really grateful to just have a connection with back-home - especially in Honduras,” says Josh. “It was so cool to feel that energy and look around when you’re playing and realize where we were and what it meant to everyone.”

For The Mowgli’s, as for any band, this whole experience is a journey - and not always an easy one. It tests your self-belief, your stamina, your relationships and your mental and emotional health. “Since this band started we’ve been through a lot of changes: gained members, lost members, been shuffled around labels and learned a lot about the music industry,” says Andy. “Now it feels like we’re really independent again, refocused on curating our live show, more in touch with the business of being this band.” He adds “Our sound has evolved but we always circle back to the basic themes: love, feeling good, excited for life no matter what the day delivers.”

Always with a mission to bring hope and positivity into the world, The Mowgli’s have been involved with numerous charities including The IRC, Heal The Bay, Happy Bottoms and many food banks and homeless shelters. 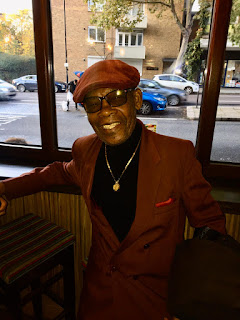 Eddie Tan-Tan Thornton’s journey to his first solo album, is a love story spanning some 50 years, which began in Spanish Town, Jamaica. Fur Elise (Single) is taken from The Reggae & Ska Nostalgia Album.

Soon after his father passed away, the 13 year old Tan-Tan was sent to the musical Alpha School, run by Nuns, which was to influence and change his life in ways he never would have expected.  Tan-Tan’s life could easily have been one of crime, but instead, thanks to one nun in particular, Sister Ignatius, he found his lifelong faith and passion for music, the trumpet!  Even today, Tan-Tan still thinks very highly of her, proudly showing the few remaining photographs he holds close to his heart.

Reggae & Ska Nostalgia is a journey of some 35 years, representing some of his favourite tracks to which Tan-Tan adds his musical touch and trumpet, demonstrating why he has played for the cream of the crop of musicians: Boney M, The Beatles (Got To Get You In To My Life), Andy Fairweather Low, Georgie Fame, The Small Faces, Desmond Dekker, ASWAD, Lilly Allen, Gyspy Kings, Lee ‘Scratch’ Perry, Jools Holland, Jimmi Hendrix, Sandy Shaw, to name a few.

At the age of 87 Tan-Tan is still gigging on a weekly basis, and can often be seen riding his bike around Acton!

These tracks were all recorded in analogue, on 24 track tapes. Producers Mike Howlett and Anthony Cooper decided to digitise the first single, Beethoven’s Fur Elise, out on February 14th, to maximise on the improved technology, some 35 years after Tan-Tan and Anthony initially recorded the track together! There is a vibrant animated video to accompany the single release, and Tan-Tan hopes that classical purists, will enjoy the track too!

It was following a young Jamacian girl, in search of work, that brought Tan-Tan to the UK.  He was not part of the Windrush movement, that was happening simultaneously. No, he arrived, like that star he was to become, by plane, rather than by boat!  So it was following his heart that brought Tan-Tan to the UK, bringing his trumpeting to the attention of so many of Britain’s  best musicians. But it is to May, a Scottish lass, whom he finally married and made a home with in Acton, west London, where he still lives today.

About Eddie ‘Tan-Tan’ Thornton: Tan-Tan credits his days at The Alpha School when he says “To me, Alpha is like heaven.  You get up, you eat, you play music, you eat, you play music.  Alpha is the most inspirational place for me.  The discipline and respect and everything.”  To this day, Tan-Tan is an ardent Roman Catholic, having made two pilgrimages to Rome, to see the Pope.

In ‘60s London Tan-Tan and his fellow musicians would hang out at Blaises, The Marquee Club and The Roaring Twenties, where he would be found in the company of John, Paul, Ringo and George Harrison.  The Small Faces even dedicated a song to him, ‘Eddie’s Dreaming’.

Eddie Thornton says “I am very grateful to The Father for everything.  Coming from nowhere, I’m very grateful.  Travelling around the world three times - my passport is full up!  And it’s all because of Alpha.” 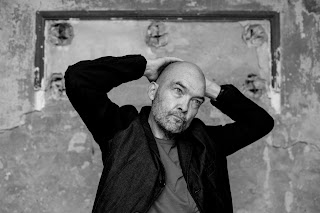 Ben Watt - Figures In The Landscape.

"Figures in the Landscape" is the latest single to be taken from musician-writer-DJ Ben Watt's upcoming fourth solo LP, Storm Damage, out on January 31, 2020. It follows the recent singles "Balanced on a Wire," described by BlackBook as "one of the most visceral pieces of music he’s ever recorded" and premiered on Lauren Laverne’s BBC 6 Music show, and "Irene" featuring Low's Alan Sparhawk.

The single is accompanied by a powerful half-lit performance video directed by photographer-film-maker Edward Bishop, and shot at RAK Studios in London, where the album was recorded in April 2019.

"It’s a call to action in response to feelings of powerlessness," says Watt of the song. "I wrote it in a period of personal crisis and political upheaval. The random nature of both can leave you feeling insignificant, lacking agency in the world, but in the end I guess you have a simple choice: to get up and celebrate what you have, or get out and take issue with it."

Storm Damage completes a compelling trilogy of albums since Watt's late-flowering return to solo songwriting and singing six years ago after ten years as an acclaimed DJ-remixer-label boss with Buzzin' Fly and seventeen in multi-million-selling duo, Everything But The Girl with Tracey Thorn. 2014's acclaimed "comeback" album, Hendra won Best Second Album at the AIM Awards, UK. It was followed by Fever Dream in 2016, which caused The Guardian to comment, "In his early fifties Watt in making some of the best music of his career."