Falcon Jane has shared 'Feelings' just ahead of Friday's album releases 'Faith'. We have already had the pleasure of featuring two songs from the new album and the latest 'Feelings' is another fine reminder of her knack for creating original and lovable music. ===== From Loryn Taggart we have 'The River' where the folk and singer songwriter shares a gently opening and intimate song, the build is gradual, the end is fabulous and in between we are treated to some wonderful vibes. ===== Leif Vollebekk has released a new original song entitled 'Long Blue Light' it's accompanied by a cover of Bon Iver's '29 #Strafford APTS'. We are just sharing 'Long Blue Light' which is a gorgeous piece that just funnels emotion. ===== HOPdot contacted us directly with 'Before We All Go Under'. They are a father and daughter duo and collectively they are simply fabulous as is born out with this gentle, intelligent and beautiful song.

Ontario-based project Falcon Jane, led by lead singer and songwriter Sara May, are today sharing "Feelings", the final pre-release track to be lifted from their forthcoming Line of Best Fit, Earmilk and American Songwriter-tipped album, Faith, which is out this Friday, November 13, via Darling Recordings. Stream the new single here.

Faith serves as the follow-up to Falcon Jane’s debut album Feelin’ Freaky, which firmly established May’s self-labeled “plez-rock”. Still keeping some of those previously pleasant summer vibes, Faith sees May steer towards a darker spiral—one that personifies the often isolating meanderings that come with figuring it all out. “A lot of the songs on the album are written from me to me,” she explains. “It’s about trusting in yourself and believing in the thoughts and feelings in your own mind.”

The new track, "Feelings", which features heart-wrenching guitar work from Branson Giles, arrives a song love song written about rediscovering love that you thought had disappeared. "A rekindling, a reawakening," explains May. "It's about letting go of the past in order to pursue a new future. Establishing a new belief system and a new way to express love." Once again featuring May's celestial vocals that are this time laced around jaunty, blues-infused guitars, "Feelings" offers up a real highlight from the forthcoming record, establishing itself as another crucial segment to the emotional core of Faith.

Faith has found Sara May going back to the beginning: her home, her beliefs, and herself. This intention gave her the ability to take another look, to reassess, to breathe. Writing under the Falcon Jane moniker, May explores the intimate experience in getting to know yourself again, highlighting the banal but beautiful ebb and flow of our every day. Her new record is an investigation into what it means to be alive and the often painful experience of the ordinary. As someone who describes herself as “emotionally guarded,” Falcon Jane is May outstretched, breaking through the introspective wall and inviting us in on the experiment.

I once moved across the world for someone I thought I loved. I didn't listen to myself, or my heart, I just followed the wind. My gut told me one thing and I ignored it. That person made me feel like I wasn't good enough, strong enough, or smart enough to face life alone.

"The River" is a song about relocating internationally for love, and realizing that it was a one-sided sacrifice. I need a man to cross the river is said in a sarcastic measure.

I want anyone listening to look at their current relationships and really question why and how they serve their wellbeing. Start to question the balance between self-love and love given. It's important you have people in your life that are willing to sacrifice for you, the way you would for them.

Weird how we walked as strangers / no rhythm and no bond / A year of love / it took this long to get you in a song is one of my favourite lines, signifying the relationship arch of going from strangers, to dating, to being in love, to strangers once more.

Sadly, and by an unfortunate loss, my father passed away this year. I was in and out of the studio for about two months while I grieved, but the experience of recording this song led me to heal much faster than I anticipated. My father was with me the entire way. He was my biggest fan and really loved this song. I hope it's meaningful for you, too.

We have the new double single release from the critically acclaimed Polaris Prize nominee, Leif Vollebekk that comes as one original track titled "Long Blue Light”  and a cover of Bon Iver's “29 #Strafford APTS”, out now via Secret City Records (SUUNS, Wilsen, Braids).

Vollebekk has drawn critical acclaim in his time as a musician from the likes of The New York Times ("pensive and restless, blossoming with stream-of-consciousness verses that bear the marks of long nights spent alone on the road"), Pitchfork ("understated and affecting"), NPR, FLOOD, The FADER, The Line of Best Fit, Paste, Sunday Times Culture, World Cafe, KCRW and more. Alongside press and radio support, he scooped a Polaris Prize shortlist nomination for his record, Twin Solitude, shared stages with the likes of Sinéad O'Connor, Angie McMahon and Beth Orton, and sold out North American headline tours.

Leif has been highlighted previously for his moving way with lyrics and his ability to build brooding and deeply emotive atmospheres, tying 60s folk music with jazz sensibilities. This batch of new music from Vollebekk hints towards his penchant for this style, producing a new original – which features drummer, Homer Steinweiss (Amy Winehouse, Sharon Jones & The Dap-Kings) and esteemed lap-steel guitarist, Cindy Cashdollar – and a take on one of Bon Iver's 22, A Million numbers. 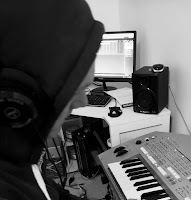 HOPdot - Before We All Go Under.

Background from David of HOPdot - A little about me I've been collaborating with a lyricist for a few years now sending songs to publishers, music companies etc.

I was looking to get songs placed with artistes getting some positive feedback now and again, to cut a long story short decided to try and make a go of it myself with the help of my daughter Amy.

Amy is singing the vocals with myself playing instruments and production, due to covid in 2020 haven't been able to collaborate or do gigs locally in Durham hoping to do so in the future.