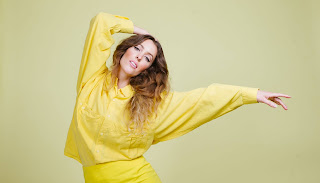 A true creative chameleon and seasoned traveler, Marie-Clo is a born performer who ropes her audiences into a feverish pitch in both official languages; thanks to “hooked on phonics”. Singer-songwriter and dancer, her eclectic indie pop tackles current themes & conscious lyrics, but also conjures a colourful and enchanted world.

Marie-Clo began her artistic career on stages worldwide performing in musicals, but honed in soon thereafter on her true passion project, music. She is currently promoting the first of three EP’s which will make up her full-length english album entitled Shell(e). A conceptual feminist narrative, it is slated to be fully released in 2021, produced by Polaris shortlisted drummer/ producer Olivier Fairfield (Fet Nat, Timber Timbre, Leif Vollebek), with the support of the Ontario Arts Council, the Canada Council for the Arts, and FACTOR.

In 2017, Marie-Clo won TFO’s pan-Canadian tv search for francophone artists Planète BRBR and was given carte blanche to participate at the Granby International Song Festival 2018, as well as at the Petite- Vallée Song Festival 2018. Following these, Aero chocolates bought her song “Sablier” for a 52-week run national commercial in which she stars.

She celebrated the independent release of her debut EP Faune which has since been playing on numerous radio stations across Canada, on Sirius xm, and joined numerous editorial playlists on Spotify. Radio-Canada named her Ontario’s number one artist to discover in 2018 as part of a 13-artist list, Canada wide, for each province & territory. Her latest single Red Flag topped CBC (#2) & Sirius XM’ (#4) top 10 charts for many consecutive months & was featured as a Sirius XM exclusive single. She recently had the pleasure of playing Ottawa’s Bluesfest, the National Arts Center, Place des arts in Montréal & opening for Ariane Moffatt.
Marie-Clo · Shell(e) Pt III 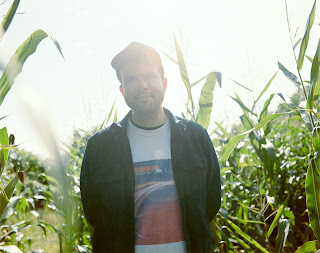 Wild Pink's highly anticipated album A Billion Little Lights, is due out this Friday on Royal Mountain Records. On "Pacific City", Ross delivers a slice of pitch-perfect, anthemic indie featuring shimmering steel guitar and soaring saxophone. A rumination on self-acceptance and patience, of giving yourself time and space, he explains the meaning behind the track: "Pacific City is named after the city in Oregon and I was watching Heat a lot while writing it. I wanted to write a few songs with a conventional song structure on this album and this was one of them - we spent a lot of time on the drum tones and used a Yamaha RX21 drum machine. The song is about time passing and realizing you’re not the same person you used to be."

On Wild Pink’s third album and first for Royal Mountain Records, A Billion Little Lights, Ross explores the dichotomy of finally achieving emotional security—of accepting the love and peace he deprived himself of in his twenties—while also feeling existentially smaller and more directionless than ever before. The record is a two-pronged triumph: an extraordinary reflection on the human condition presented through the sharpest, grandest, and most captivating songs Wild Pink have ever composed.

The band, which is rounded out by bassist T.C. Brownell and drummer Dan Keegan, formed in New York City in 2015 and put out a handful of EP’s before releasing their critically acclaimed self-titled debut in 2017. It was a sophisticated showing for a band’s first album, but it was the striking maturation of Yolk In The Fur that established Wild Pink’s unique sound: a glistening variety of pastoral indie-rock akin to The War On Drugs, Death Cab For Cutie, and Kurt Vile, but informed by classic American rock poets like Bruce Springsteen and Tom Petty. The album received glowing praise from Pitchfork (a score of 8.1), Billboard, NPR, Stereogum, and Uproxx, the latter deeming them “one of indie’s best emerging bands.” 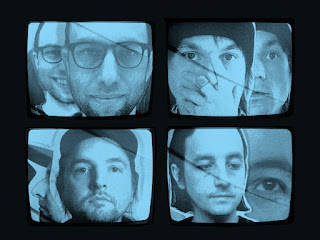 Genghis Tron have shared a new song titled “Ritual Circle” from their highly-anticipated Dream Weapon full-length. Hamilton Jordan comments, "When writing and recording this album, one of our aims was to create a deep sonic world the listener can really get lost in.  'Ritual Circle' embodies that for me—it still takes me to another place whenever I listen.  Find some headphones, turn it up, and zone out."

Lyrically and conceptually, Dream Weapon picks up where 2008's heralded LP Board Up The House left off. “That album’s closing track, ‘Relief,’ was about how humans have become a burden to the planet, and how Earth will endure long after we’re gone,” Jordan explains. “There is sadness at the end, but some relief—and beauty—too. Dream Weapon is, loosely, an album-length meditation on that theme.”

From the ethereal, almost robotic vocal phrasings accompanying the industrial attack of “Pyrocene,” to the chaotic, pulse-pounding drumming acrobatics and cyclical guitar patterns in the album’s triumphant title track, Dream Weapon is not just a nod to Genghis Tron’s celebrated past as a metal/progressive/experimental outfit. The new album redefines what these genres, sounds, and musical elements can achieve. Dream Weapon is a record that captures Genghis Tron at a matured, focused state; the ebbs and flows of the album are just as hard-hitting as they are dreamy, soaring, and meditative.

Seasoned Genghis Tron listeners will find Dream Weapon to be both excitingly fresh and reassuringly familiar. “Though it sounds a bit different than our previous albums, I don't think we approached Dream Weapon any differently than the others,” Jordan explains. “Michael and I take years to write and trade demos, with about 80% of our ideas landing on the cutting-room floor. Once we have a rough song idea we both like, we write dozens of drafts of a song over months before we end up with a final demo.”

Sunfields - Got Some (But It Ain't Enough).

Imagine Elliot Smith hanging out with Tom Petty in the back of Neil Young’s van while listening to Sparklehorse.

Acid-laced pop Sunfields is the brainchild of singer-songwriter Jason Kent. Although the quartet was born in 2009, three quarters of its members have been playing music on and off together since they were teens. Their tunes carry a classy bombast of chamber rock, the intimacy of a singer songwriter, and the easy-breeziness of vintage pop with some psychedelic undertones thrown in.

Since their formation, Sunfields have toured extensively throughout Canada and Europe. Their fourth album, made in isolation, will be out March 12th, 2021 on Elephants on Parade.

PALACE IN THE SUN (2010) was once described as “…full of stunning imagery, coupled with swooping guitars and harmonizing that the Eagles would be proud of…the most overlooked album of 2010.”

Their sophomore, HABITAT (2014) was described as “…blossoming like a field of poppies in a rainy English field.”

MONO MONO (2017) “An album that catches you from the outset and its beauty is that it has many layers that reveal themselves after every listen.”
Elephants On Parade · Got Some (But It Ain't Enough)