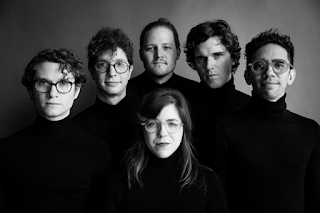 The New Orleans-based six-piece band Sweet Crude announced Dualité: have a new double A-side singles series where the group will release pairs of songs where one is sung in Louisiana French and the other in English. In celebration of Mardi Gras, the band released the first installment today with two brand new songs “La Rêveuse” and “Under New Moons.”

“Tours? Nope. Money? Broke. Launch a blitz of bilingual bangers in 2021 because we can? Putain ouais (hell yeah, and pardon our Louisiana French),” explains singer Sam Craft. “Through confinement and a lack of gigs, we’ve steadily built up a loyal Patreon following with whom we’ve been streaming and chatting on a regular basis. They’ve been inspiring us to keep going and to write like crazy. We show them brand new ideas, they give us feedback, and we are now self-producing and self-recording a whole new body of work for approximately zero dollars. Dualité is the result, or really the start, of this new frontier. The first two tracks to kick things off showcase our French and our English sides. We remain dedicated as ever to creating new avenues to celebrate our Louisiana roots.”

“‘La Rêveuse’ (The Dreamer) is an all-French song and carries the premise that we are all living in someone else's dream. In the song, our dreamer is likened to a little kid playing on the beach, building sandcastles and romping around. Unbeknownst to our baby-god, we are actually all denizens of her temporary sand creations and are at the mercy of all her arbitrary whims. It could kinda explain why everything is so dang weird all the time. Not exactly being conspiracy theorists, we wanted the music to have a certain tongue-in-cheek bounce to it, while maintaining the drama of COVID-induced desperation.”

“Meanwhile, ‘Under New Moons’ is a reality check. On a stream one day, our fans offered us the prompt to write a song about self-care during lockdown. We narrowed that idea down to the moments in life when the best self-care is to disengage from that person (place or thing) that provokes all your worst habits. This moody, minor-key bop takes you on a push-and-pull emotional journey.” 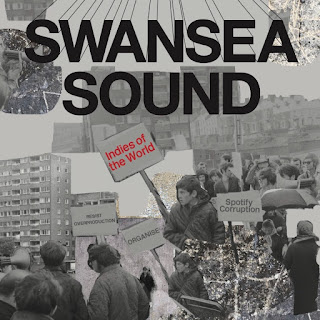 Swansea Sound - Indies Of The World.

‘Indies of the World’, the new single by SWANSEA SOUND, is a call to arms. Its aim is to revitalise the Global Pop Underground, making it strong enough to vanquish the corporate behemoth. OK, it’s just a limited release 7” single.  But the revolution has to start somewhere.

Hue Williams and Amelia Fletcher of the Pooh Sticks were reunited a few months ago on the first SWANSEA SOUND single, ‘Corporate Indie Band’.  It attracted lots of interest and airplay and sold out in a few hours.  Since then, second single ‘I Sold My Soul on eBay’ has been released as a one-off (on eBay) and played on many radio stations.

‘Indies of the World’ will be released simultaneously on four different Indie Labels of the World.  There’s no need to buy an expensive import: It will not be released on Spotify, Apple Music or other corporate streamers.

‘Indies of the World’ is for record-lovers, indie dancefloors, non-corporate radio shows, and the flourishing online indie DJ/blogging scene. Flipside ‘Je Ne Sais Quoi’ is a duet in which feckless male Hue is berated by nonplussed female partner Amelia.  It’s like ‘C is the Heavenly Option’ after a lovers’ tiff.

From Rob & Amelia - The song and the video are a celebration of ‘indie’ in its most meaningful sense, i.e. independence from corporate control, with a DIY attitude to playing, recording, releasing records and making videos.

The video was made by Amelia and Rob, using the 7” single sleeve art by Welsh artist Catrin Saran James.  Swansea Sound started during lockdown, so the band are used to sending each other bits of music, ideas for songs and video footage.  It will be a strange and disconcerting moment when they are finally able to meet.

Indies of the World is the first release on new UK label Skep Wax, but it’s also coming out on sister labels Formosa Punk in Japan, HHBTM in the USA and Lavender Sweep in Wales.  It’s available digitally on Bandcamp, but isn’t on Spotify or Apple or any the other corporate streamers because they aren’t sisters, they are ogres. 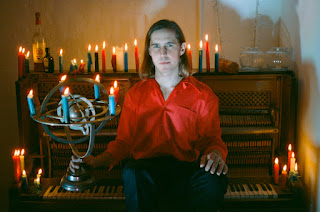 Quickly following his debut EP 'Last Days of Rome', Strange Time was written slap-bang in the middle of 2020; Tomlinson, confined to his home, created a stripped-back home studio set up and the songs immediately began to flow.

Central to the album is new single "Them Apples" – a psychedelic seven-minute treatise on modern paranoia and social media addiction, taking in elements of acid-folk, chamber-pop and progressive rock along the way.

The song floats on glistening organ and bluesy guitars as Tomlinson contemplates how “even when we’re really here, half of us hangs in the air.” Guest vocalist Connie Chatwin (Sam Smith, dodie) takes up the choric role, playing the voices of morbid-yet-irresistible headlines, singing sweetly to him about SOS notes found in cheap clothes from Bangladesh, and the Venetians losing their city to rising tides, dragging him deeper into the doomscroll. As the opus descends into a beautiful clutter of flute, sax and noodling guitar that mirror his overwhelmed mind, Chatwin’s mellifluous tones turn into cackles as Tomlinson finds himself powerless to resist the screen, begging “talk to me world, tell me everything.”

At almost 8 minutes long, it's the album's undeniable centrepiece, both stylistically and thematically. Speaking on the themes behind the song, Tomlinson explains: "Originally it was because Viljam (Nybacka, co-writer of the song) asked me, what have you been doing? I said 'I can't remember, I've been so busy'. I thought that was intriguing - the intensity of life rendering each day featureless. Then the pandemic hit and everyday really was the same! I knew then that this was one of those - a song about EVERYTHING all at once, a real rabbit hole."

Adding further context to Connie Chatwin's Greek Chorus-inspired backing vocals, Tomlinson explains: "They are tweets, feeds, stories from phones and various other devices. They are the voices in our heads that only we can hear as we go about our daily lives, inaudible to others outside of our personalised versions of reality on our screens. The meditative chorus lyric is the reason for the season, the compulsion and anxiety to find the answers and validations that we want from the world through the portals that we carry around with us."

The track's video is "a reflection of the hyperreality of 2020" – according to director Tomas Jef. Shot on a digital camera and then processed through analogue video equipment; custom-built video effects machines and redundant BBC Studios-salvaged broadcasting equipment, Jef went on to say: "All this time we spent indoors staring at screens, the whole year was like one blurry memory with a weird sense of time passing slow and fast at the same time. Different scenes in the video suggest the contrasting worlds between imagination and reality."

"Them Apples" also features contributions from guitarist Angus James and clarinet from Joe Connor. Its sound palette is part-inspired by seminal British folk band Trees' second album On The Shore, and Tomlinson's time playing in the On The Shore Band alongside members of Trees, Metronomy and Friendly Fires. 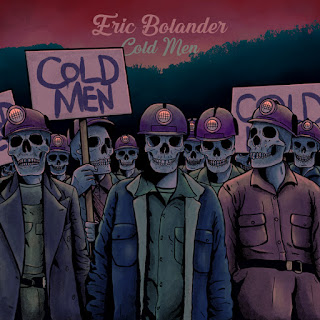 Eric Bolander has officially released the music video for “Cold Men” -- chronicling the Blackjewel Miners protests in Harlan County, Kentucky in response to owed back pay.

This new single, produced by regular Bolander collaborator Duane Lundy (Sturgill Simpson, Ringo Starr) in Lexington, Kentucky, is a natural transition in Bolander’s catalog as a deeply-emotional protest song in an ever-tumultuous world. While it is based in the realities of a specific event, it serves as a cathartic microcosm of the pain so many have felt in the past year.

Sonically, Bolander’s music gallops through the crossroads of John Moreland and Bruce Springsteen (circa Devils & Dust), from rollicking explorations of struggle and its broken remnants to bitter, cynical prayers.

Bolander’s sensitivity to the human condition stems primarily from humble roots in the small eastern Kentucky town of Garrison, stretching at the edge of the Appalachian foothills and running along the Ohio River Valley. Growing up in a low income household instilled within him a sense of hard work and fighting for what he wanted in life. His mother was a homemaker (whose family had ties to several bluegrass legends) and his father a union carpenter and construction worker, both pivotal forces behind his early development.