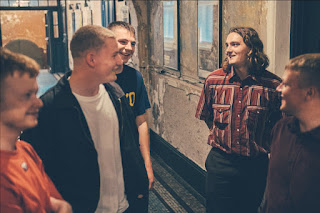 The band take a sharp left-turn on "White Shirt / Clean Shirt", upping the tempo and storming forwards with a hip-wriggling, eccentric examination of office work. Building on the playful post-funk hooks present in “Modern Yuppies”, Home Counties continue to show they're a band who are not afraid to colour outside the lines, both sonically and lyrically.

Singer Will Harrison said: "'White Shirt / Clean Shirt' began life as a guitar-orientated number that was a staple of our live set last year at our first shows, but then we had sort of fell out of love with it. Through lockdown, as we started experimenting more heavily with synthesisers and drum machines; we reworked the song with these new influences and it found a new lease of life.

"The two singles are linked lyrically, both looking at working life under contemporary capitalism. ‘Yuppies’ was written about the destructive mentality of middle-class professionals - constantly wanting more success, more money and more consumer goods. ’White Shirt / Clean Shirt’ looks at the less aspirational, and more universal reality of office work. It voices that feeling of losing your sense of self and place as you go into work, dressed uniformly in a Next suit, in an indistinguishable space, staring at another spreadsheet. It’s also got a bit of a ‘how did I get here?’ sentiment, being at work thinking about what more aspirational (or more expensively educated) people might be doing. Ultimately, it voices a feeling of having ‘learnt to fall’, rather than taught to succeed - sinking into the safety net of unfulfilling white collar work."

Both "Modern Yuppies" and "White Shirt / Clean Shirt" are exciting first glimpses of a band evolving beyond their indie roots. Combining their aptness for angular guitar work with a more flamboyant sonic vision, the band's next steps will see them begin work on their second EP, due for release in the autumn. 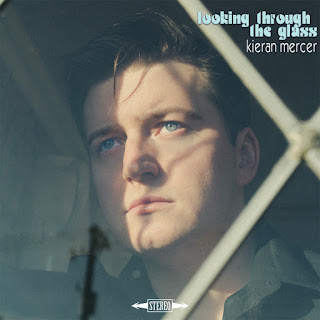 Kieran Mercer - Looking Through the Glass.

“Kieran Mercer is no stranger to the Canadian music scene, having opened for the likes of Marianas Trench, Walk off the Earth, Carly Rae Jepsen and Lights.

Looking through the Glass is Kieran’s first independent release. The song was written and performed entirely by the artist, and produced by long-time friend and former band mate, Martin Leather. The song is nostalgic for the glory days of youth and is more acoustic and stripped down than previous releases. Looking through the Glass observes a younger generation through the window of social media at an age where the observer is no longer in on the joke.

Kieran’s songwriting pulls from many musical styles. “My influences are all over the map,” says the 32 year old. “I grew up listening to country music like Hank Williams and British bands like the Kinks. In high school, I got into Stevie Wonder and Michael Jackson. This mix of influences is my foundation and I let it all flow into my own unique style.”

His 6 song EP Help Me Help You was released in 2016 under 604 Records, charting on the Top 20 Canadian Album chart on iTunes. Anarchy was the first single released from his EP Fools Gold in 2018, to critical acclaim.”
KieranMercer · Looking Through the Glass 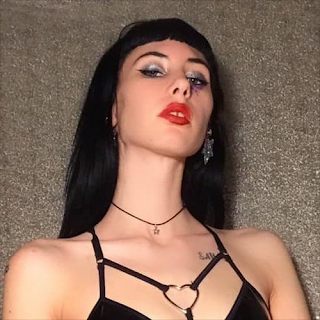 Starting her project in London after being employed in Florida and travelling through the United States, French-born Alternative artist and songwriter Mango In Euphoria quickly found her audience when she dropped her first experimental work at the end of 2020.

The singer is an emerging talent noticeable by her quirky style and her mysterious signature voice, matching her very own unique musical tracks mixing Electronic Rock, Dream Pop and Dark-wave genres.

Creating melodies coming from her mind with virtual instruments and recording with a very basic microphone during the global Coronavirus pandemic, Mango In Euphoria also began to work remotely with Belgian producer Philippe Francq who helped her developing a lot of demos with physical instruments inspired from vintage influences such as the Twin Peaks series soundtracks, The Cure, and Garbage. As Mango was mainly musically influenced by Grimes, Marilyn Manson and Lana Del Rey, there's no doubt that the result would be quiet outstanding.
MangoInEuphoria · Mango In Euphoria - Golden Shrine