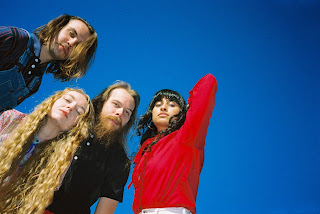 Last November the Atlanta (by-way-of-LA-by-way-of- Austin) band Mamalarky released their self-titled debut full length on the buzzing Brooklyn label Fire Talk (Dehd, Pure X, PACKS). The LP was one of the most critically-acclaimed debuts of the pandemic year, seeing praise from outlets like NPR, VICE, Billboard, among many others. Now Mamalarky are returning with their first new music since their LP, a pair of singles entitled "Meadow" and "Moss" that are being released to mark the announce of the band's first touring in support of their debut, a run of dates that includes shows with Slow Pulp as well as an East Coast headline and a New York showcase with their labelmates PACKS & Wombo.

Accompanied by a pair of videos directed by the band (who have worked on several of their own videos and recently began directing videos for other artists as well), the tracks both concern different experiences of nature and were appropriately, according to singer and guitarist Livvy Bennett, both written outdoors.

"Monotony is an illusion, or at least it’s a very tired way to look at things." says Bennett. "Nature always has something new to offer when we slow down enough to absorb it - isolation made me appreciate and deepen this relationship significantly. I realized I’m never actually alone when I’m out under some trees. Moss offers more of a coming to terms that the surrounding landscape could be my anchor and company for the time whereas Meadow is a spark of excitement at finding a less traveled path on my daily route that opened out onto a beautiful stream with singing frogs. I wrote both these songs outdoors which I had never tried before. I still go to these spots often and they hold me up!" 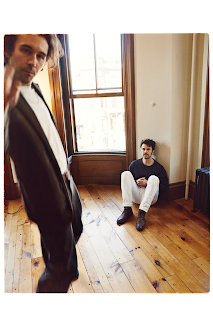 Tall Heights have relentlessly built a career from the ground up. Starting as buskers on the streets of Boston and now performing in packed venues across North America, Europe, and beyond, the duo has distilled their sound in an organic and unself conscious way. The unmistakable DNA of their music draws on many elements, but the blend of their two distinct voices, in both harmony and unison, is what elevates it and separates it from the pack.

Hailing from the Boston area, Paul Wright and Tim Harrington met each other in their hometown of Sturbridge through Tim’s older brother. The friendship blossomed in high school when they both took up the guitar and began working on music together. It didn’t take long for them to see the potential hidden in these casual jam sessions. As Paul recalls, “Tim transformed from kid brother to musical collaborator over the course of a summer.”

Combining Paul’s lifetime of classical training, Harrington’s spontaneous artistic instincts, and the prismatic union of their unique voices, Tall Heights’ sonic imprint is in a category all its own.
Tall Heights · Hear It Again