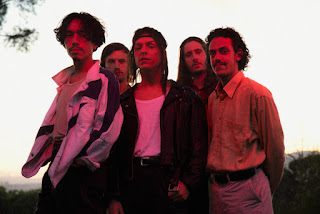 Barcelona's Spanish/Chilean psych-rock quartet, The Zephyr Bones are today sharing "Sparks". The new single marks another spangled nosedive through psych-rock arriving as the final advance installment to be lifted from their forthcoming album, Neon Body – out via La Castanya on October 22, 2021. It arrives produced by Brian Silva and Santi Garcia with the album artwork designed by the Portuguese illustrator/artist, Bráulio Amado who runs NYC's BAD Studio, has illustrated for The New York Times, and works as one of the main artwork designers for Frank Ocean and Róisín Murphy.

The new album, tipped so far by SPIN, NPR's Alt Latino, Remezcla, Beats Per Minute and more finds The Zephyr Bones, made up of Silva (vocals, guitar and synthesizers), Jossip Tkalcic (guitar and vocals), Marc López (drums), and Carlos Ramos (bass), exploring ideas centered around love, self-affirmation, loss, and hope. Musically, it finds the group tapping into their "beach wave" aesthetic once more, a style of music that they helped nurture alongside a few other groups in Barcelona back in 2017. It is sound and approach to music gravitated around spangled psych-rock reminiscent of the radiant, sunkissed environments that surround the scene.

The Zephyr Bones formed when Silva, Tkalcic, López and Ramos met in Barcelona after the former two names arrived from their home country of Chile. In 2015 they released their debut EP, Wishes/Fishes via La Castanya. That first release was then followed by the seven-inch "Black Lips b/w Surrounded by Sunflowers" released by La Castanya and the New York label Other Music Recording Co. Their debut album, Secret Place – a psychedelia and dream pop hybrid – took them on a tour around the United Kingdom, Europe and the United States, playing on all types of stages. Neon Body, their second album, expands their sound by exploring the fusion between humanity and machines. 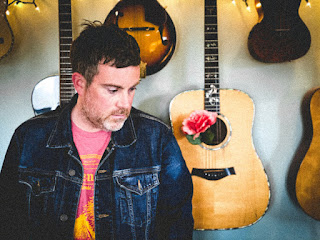 Chris Robley - A Filament in the Wilderness of What Comes Next (Album).

Vocalists Margaret Gibson Wehr and Anna Tivel, about whom NPR’s Ann Powers said, “Singer-songwriters are often called poets. In truth, only a few deliver the deep insight and sense of the new that breaking through the predictable achieves. Anna Tivel is one.” Robley's cinematic album has scope and breadth, without losing the emotional fidelity of small, moving details. The album concludes with the belief that empathy is "a filament in the wilderness of what comes next," that simply trying to understand someone can be a radical act of love.

Here’s what we’re reading about A Filament In The Wilderness of What Comes Next: “Chris Robley beautifully captures state of the union… Robley’s weighty words — he’s an award-winning poet — are made even more powerful because they’re paired with equally engrossing melodies. It makes for the loveliest kind of blues regarding disparity, hypocrisy, racism and American retreat in a foreign land… Robley’s way with a tune is a giver of goosebumps. The melodies are as effortlessly irresistible as an old folk song, the sort sung when the stakes are high.”