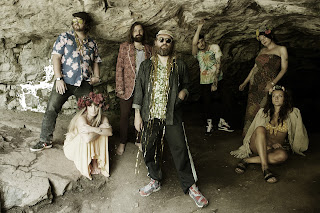 Scattering a melange of bouncing robotic beats, raygun guitar splatters, and alien doo-wop choruses in its technicolour vapour trail, “Psilocyberman” leads a sonic invasion of the seriously addictive kind. Coupled with a jubilantly malfunctioning break-down, listen out for a cameo from South London music scene legend Patrick Lyons too.

“Psilocyberman” arrives as the first official glimpse of Heavy Salad’s upcoming second album ‘Long Wave’, which is confirmed for release later in 2022. The follow-up to the band’s warmly received debut ‘Cult Casual’, it was recorded at Damon Albarn’s Studio 13 in West London and at their current base in Manchester. Striking up a creative partnership with esteemed producer Stephen Street, he is confirmed to have produced and mixed a number of tracks across their forthcoming record, alongside Christophe Bride (A Certain Ratio). Speaking about working with Street, Lee Mann adds:

“Working with Stephen Street was a dream come true for Heavy Salad, he instantly recognised the band’s knack for a killer hook and a guitar player who does things differently! Having worked with some of the most distinctive guitarists in British rock, Stephen can now add Rob Glennie to his illustrious list of collaborators. Stephen is well known for delivering experimental guitar pop and “Psilocyberman” is no exception.”

The “Psilocyberman” release also finds Heavy Salad collaborating with another of their favourite creatives, acclaimed illustrator: Stan Chow. Having drawn Northern icons from Andy Burnham to Maxine Peake, Chow now inducts Heavy Salad into his Mancunian hall of fame with the specially commissioned artwork for their current single “Psilocyberman”, and the promise of more to come “When it came to bringing “Psilocyberman” to life there was only one artist on the band’s wish list and the single features amazing, bespoke artwork” says Lee. 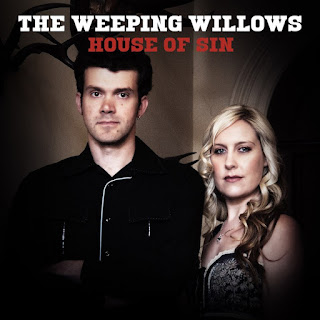 The Weeping Willows - House Of Sin.

Golden Guitar-winning duo The Weeping Willows have long burned brightest in the shadows. True to form, with the earthy new single and cautionary tale, “House of Sin”, the pair considers the irresistible flame of temptation and the wages of iniquity that follow in its train.With its sinuous fingerpicking and ominous note of warning, “House of Sin” finds The Weeping Willows at the peak of their songwriting and vocal powers.

The Weeping Willows have performed everywhere from AmericanaFest (USA) to Folk Alliance International (USA) and have supported the likes of Lukas Nelson & Promise of the Real (USA) and Iris DeMent (USA).

Recorded, engineered and mixed by Ryan Freeland (Ramblin' Jack Elliott, The Carolina Chocolate Drops, Ray LaMontagne, Bonnie Raitt, Aimee Mann) at Los Angeles’ world-beating Stampede Origin Studio and drawing from the same shadowy thematic wellspring as the duo’s critically-acclaimed sophomore studio album Before Darkness Comes A-Callin’ (2016), “House of Sin” is a thrilling meditation on the darker underbelly of a fallen world and offers a glimpse into The Weeping Willows’ much anticipated third studio album, “You Reap What You Sow”.

The song is also the first release under The Weeping Willows’ new distribution deal with Compass Bros for the forthcoming album. “I’ve long admired Andy and Laura’s musical sensibility and work ethic and am delighted to be working with them on the release of their extraordinary new album, You Reap What You Sow”, said Compass Bros’ Graham Thompson.

From Laura Coates of The Weeping Willows: “We’ve had great respect for Graham’s work ethic and integrity since meeting him when we were the support act on Shane Nicholson’s Hell Breaks Loose album tour back in 2015. Compass Bros has long been an important name in Australian Country and Roots music so we’re truly honoured to be joining such an amazing team and music family”.

Anna Sun - What A Shame.

With seductive vocals, dreamy atmospheres, and explosive energy, Anna Sun explores the world through a haze of mystery and romance. Their debut EP, Extended Play, just released in January 2022, manages to capture the triumphs and anxieties of being alive in such a strange time. “What a Shame,” was written as a catharsis for lead singer Samantha Aneson as she was forced to accept the reality of losing her mother to dementia. It captures the trauma through a filter of enthralling vocals and explosive energy.

“I’ve grown to love the dichotomy of pain and lightness in art. How one can make the other so much more pronounced,” Aneson says. “I was in a place (am forever in a place) of begrudgingly agreeing to this reality that’s been forced upon me. Having to move forward without railing against existence for doing something that once seemed so unimaginable. Having to find light in my nightmare.”

The core of Anna Sun’s appeal lies in the diary-like songwriting of Aneson (pronounced just like the band name). Sometimes thought-provoking, sometimes heartbreaking, the songs always seem to find an underlying sense of optimism, a reflection of their writer’s personality. They dig deep into the often tricky dynamics of relationships while managing to remain exceptionally catchy.

Aneson credits her desire to weave a story bigger than herself to her background in theatre. The Southern California native studied acting at the University of California, Irvine, before relocating to NYC and co-founding the folk-rock band Satin Nickel, which Balać and Shewaga eventually joined. When that group disbanded in 2020, Aneson began adding original indie-pop-rock songs to her repertoire and recruited her former bandmates to bring them to life, and Anna Sun was born. Making music that is meaningful and accessible is a rare thing these days, but Anna Sun seems to have achieved a perfect formula for their unique brand of expression. 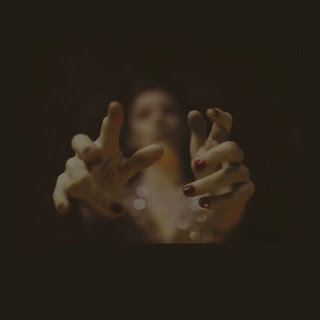 Barzin - Voyeurs In The Dark.

Four years in making, Voyeurs In the Dark is Toronto artist Barzin’s fifth studio album. That the album is more cinematic in its scope and conceptual in feel than his previous studio albums can be attributed to the time he spent over the past several years composing the soundtrack for the independent film, Viewfinder.

Voyeurs In the Dark retains that cinematic quality, and at the same time infuses the music with elements taken from Jazz, electronica, rock and pop. Having primarily explored the quiet side pop and folk in his previous four albums, Barzin has expanded his musical palate, broadening his sound towards a more an experimental direction, while still retaining his preoccupation with exploring the  internal landscape. The uniformity of sound that characterized the previous albums has been abandoned for the expression of differing aspects of the self that at times hold opposing views and desires. This is best represented in the image chosen for the cover of the album, which depicts three figures in one body. The album seems to be the expression of not one unified self, but the various aspects of the self.

Voyeurs In the Dark sees the artist plot a seductive, contemplative route through city haze, shuttling between graceful glimmering interludes, with wonderfully atmospheric songs at every stop. From opener Voyeurs In the Dark’s first guitar strums and the fizz of its drum machine, the record envelopes itself in a glorious shadow, as shown in the slow waltz of I Don’t Want To Sober Up, dancing around its own swirling guitar chords. On Watching, Barzin plunges himself deeper into a wash of cyclic bass, guitar and synth riffs, as the gloom grooves into light. It’s Never Too Late To Lose Your Life has a much more affirming and urgent tone, shade turning into shapes and motion, while To Be Missed In the End builds its own smoke in a cloud of saxophone and sparse guitar notes, closing out a record full to the brim with scatterbrain beauty and eclectic dusk.

The video for Voyeurs in the Dark, takes you on a sensual journey through a nocturnal cityscape. “I remember, years ago, coming across a passage written by the writer and psychologist, James Hillman”, explains Barzin. It said: "The only solution to the longing for union is union with longing." This has stayed with me ever since, and I think it has informed this song.””

Voyeurs In the Dark will be released worldwide on Monotreme Records on April 22nd 2022 digitally, followed by physical releases on CD and 180 g black vinyl on May 6th. Pre-orders of vinyl LPs or CDs from the Monotreme Records web shop will also include a free limited edition 27-page booklet of poems by Barzin, Playboys in the Holyland. 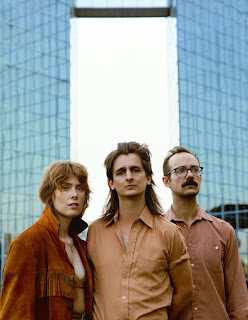 The Hamilton, Ontario-based trio, Ellevator are today sharing their new single, "Slip" which arrives with another stunning visual piece directed by Cam Veitch and featuring Hawksley Workman. Alongside the new single, the band is announcing details of their debut album, The Words You Spoke Still Move Me  – out May 6 via Arts & Crafts – which comes produced by Chris Walla (formerly of Death Cab For Cutie), who has previously helmed production duties for the likes of Foxing and Tegan & Sara. The new single arrives following earlier tips from NPR, The Needle Drop, Exclaim, FLOOD, The Line of Best Fit, Under the Radar, CBC and more for "Easy" and "Charlie IO."

The band, which is comprised of Nabi Sue Bersche, guitarist, Tyler Bersche and bassist/synth player, Elliott Gwynne, will deliver on the promise of their self-titled 2018 EP with their long-awaited debut album. The record was pieced together across numerous locations but primarily while living together at The Bathouse (a Kingston-area facility owned by Canadian alt-rock legends The Tragically Hip) and comes off the back of earlier dates with Amber Run, BANNERS, Cold War Kids, Arkells and Dear Rouge. Across 12 tracks, it inhabits an emotional landscape that is both breathtakingly intimate and impossibly vast, documenting various experiences to turn universal (existential longing, romantic power struggles, the neverending work of true self-discovery) and highly specific (e.g., one band member’s journey in extracting herself from a cult) storytelling into a truly hypnotic body of work, giving rise to the kind of radiant open-heartedness that radically transforms our own perspective.

Ellevator poses a fantastic ability to sculpt these mammoth, melodramatic post-rock and indie-rock soundscapes, somewhat inspired by the late-aughts sounds of Spoon, Metric, Interpol and Arcade Fire, as well as the stadium-ready sounds of U2, Kate Bush and Peter Gabriel. "Slip" acts as another wonderful installment of this dynamic with the trio turning the dial on the prog-rock influences incorporating chugging guitars with tightly-bound vocals. With the new single, the band turn to explore the folklore surrounding the Selkie, a theme mirrored in Veitch's accompanying visual.