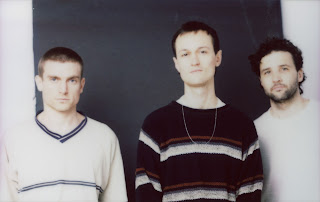 On Friday, the debut LP from Cola, Deep In View, will be released on Fire Talk Records. The new project from former Ought members Tim Darcy and Ben Stidworthy and US Girls/The Weather Station drummer Evan Cartwright, the band's debut has been one of the most anticipated releases of the year, earning praise from outlets like NPR, FADER and Rolling Stone who named the band an Artist You Need To Know and called their debut "one of the year’s most thrilling rock statements." Today, Cola are sharing a final single from the LP, a track called "Fulton Park."

"Ben and I had a flow writing this record where we would send each other demos every Friday," Darcy has stated. "It was a really motivating way to write, as I would spend the week working on something but then get the bonus of hearing what Ben had written when I sent him my track.  I heard Fulton Park and was immediately excited to work on vocals for it.

It’s such an interesting instrumental.  These lush almost psychedelic guitars in the intro and chorus are paired with this really stripped down almost honky tonk verse.  It conjured in my mind this kind of old west imagery.  I suppose looking back on the lyrics now, that same kind of juxtaposition is present. Similar to Landers, it takes a look at the natural world and then the odd, magical, sometimes empty things that humans do on that landscape."

Today, acclaimed singer/songwriter Josh Rouse shares the new single “Stick Around” off his forthcoming album Going Places, which releases July 29 via Yep Roc Records. Inspired by the groovy American and English music of the 1970’s, the song is punctuated with an unexpected Memphis-style horn line.

"I wrote this one summer while doing an outdoor show in Puerto de Santa Maria, Spain,” explains Rouse. “We recorded the song in a couple takes, it sounded somewhere between J.J. Cale and Fairport Convention, until I had Jim Hoke put some saxes on it and it became something else entirely. A barbecue strummer!"

Going Places came together over the last two years when Josh Rouse found himself hunkered down with his family in Spain. Inspired by a desire to perform live during a time when that was virtually impossible to do, he got together with his Spanish band to workshop the songs in a small local venue owned by a friend. The resulting collection of songs trades the polished sheen of his prior work for a looser, more relaxed vibe. Where 2018’s Love in the Modern Age saw Rouse take a left turn to keyboard-based retro-new wave territory, Going Places is steeped in waves of his classic guitar melodies, with touches of organ and horns, layers of backing vocals and a distinctive southern twang. Listen to the debut single “Hollow Moon.”

Over the last two decades, Josh Rouse has solidified his status among this generation’s most acclaimed songwriters with insightful lyrics and a warm, effortless style. His work has been celebrated by press including Associated Press, Billboard, NPR Music, Los Angeles Times, BrooklynVegan, Salon and more. Forbes called him “a masterful songwriter,” and Paste declared, "His knack for setting a simple feeling to a breezy melody shines through again and again.” Now passing 50 years old, Going Places marks the next phase of his career. Looking toward the future, the new album once again proves Rouse’s undeniable ability to evolve and push his sound forward, delivering something that is both familiar and wholly new.