Franklin Gothic, the solo project of musical artist Jay DiBartolo based out of Portland, OR, announces his debut record titled Into the Light, out August 19th via split release with Very Jazzed and Pleasure Tapes. The record was made in collaboration with producer Erik Blood (who has worked with Shabazz Palaces, Pickwick, Tacocat, and more).

Into the Light draws inspiration from musical influences that stem back to Jay’s early ‘90s childhood. It showcases a variety of styles, from shoegaze to Americana, challenging the expectation that a band, record, or song is bound to any specific genre.

The 12-song LP follows the ups and downs of the singer/songwriter’s experience, as he struggles to leave behind an old cynical view of the world to make room for a more openhearted one. 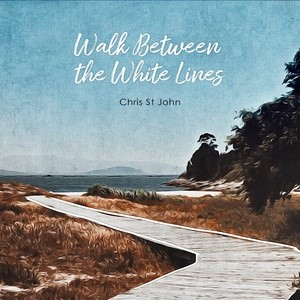 Chris St. John has been on a roll these last two years, having written dozens of songs which have appeared on two separate albums. His first album, I’m Dreaming, which was released in 2021, gained critical acclaim and commercial success. The album had four chart-toppers on the World Indie Music Charts and the Euro Indie Music Network, including “I Called You Rose,” which climbed all the way to No. 3.

Recently, Chris was in Nashville, working with legendary producer Stephen Wrench, as well as some of the finest session musicians in Music City, to record his upcoming album Fly Away. During the production of the album, Chris released the song “Hey Siri,” which quickly hit No. 1 on the World Indie Music Charts and the Euro Indie Music Network and remained there for five weeks. “Hey Siri” has a playful, rolling African groove reminiscent of Paul Simon’s Graceland. This clever, lively, and thought-provoking song focuses on the drawbacks of modern technology. Stylistically, it’s an outlier of sorts, scratching only the surface of the deep and impactful artistry Chris showcases over the course of 13 tracks.

The diversity of the songs makes it very hard to fit Chris’ music into any one genre. His voice is velvety and clear on the album’s ballads, and heartfelt and rocking on the up-tempo songs. His tenor voice has remarkable range and clarity, and his different vocal stylings on each track make it hard to believe it’s the same singer throughout the album.
Chris St. John Music · Walk Between The White Lines