The Nora Kelly Band emerged this spring sharing two rip-roaring singles, “Hymn for the Agnostics” and “Change My Mind,” while destroying audiences at Canadian Music Week, NXNE, supporting Kiwi Jr., and this past Friday celebrating early with a headlining performance in their hometown of Montreal. This week they share a new single “Right Now,” and announce their debut EP, Perfect Pig, out today.

Discussing “Right Now,” bandleader Nora Kelly stated, “'Right Now' chronicles the rise and fall of a past relationship. The song was written when I was in the throes of the breakup woes, but it also has a sense of optimism about the future. It’s sort of a pep talk to myself that things will get better, while also being an honest encapsulation of what I was going through back then. I’m proud of the song for its vulnerability, and how it details my ever-shifting understanding of love. Like now when I sing it, I tell people it was once a sad song about my ex but now it’s a happy song about my dog."

When DISHPIT imploded in the early stages of pandemic - a romantic and creative relationship gone sour, which even Kelly’s ‘screw-off, I’m tough’ nurtured punk persona was unprepared for, salvation came along in railroad adjacent acoustic country cover meet-ups with a group of friends and artists, in the earliest days of being able to meet up outside once again.

From these loose collaborative connections, the Nora Kelly Band emerged. “That’s where I first played the songs that make up ‘Perfect Pig’,” Kelly notes. “And it’s where I was so lucky to meet the majority of my band. Each member brings something special to the table: Vader Ryderwood, the 6ft 5in bass player and alien enthusiast, Ethan Soil, known as the smiliest drummer in Montreal, Rachel Silverstein, with the voice of an angel and piano skills to boot, and Dylan Keating, who plays pedal steel and has a PhD in Astro-Physics. This group of musicians have become my best friends and given back my passion for music.”

Along with the album announcement, La Femme has shared a new music video for “Sacatela,” the first single taken from Teatro Lucido. A very classy and colored video shot in Nice, South-West of France, that features many members of the band. The video for “Sacatela” was directed by french director Ilan Zerrouki and is about unacknowledged desires and unpursued dreams also called ‘Sacatelism.’ “Sacatela” has been played all summer long on radio stations across the US, Mexico, and France and is already a streaming success for the band.

Fresh off of their sold-out US tour, the band has also announced additional tour dates in France, Greece, Italy, Netherlands, and the USA at III Points Fesitval in Miami & Levitation festival in Austin.

La Femme already holds 2 gold records in France and a Victoire de la Musique, as well as dozens of tours internationally, notably in the US, Mexico, Asia and Europe. They are among the few French artists that succeeded abroad while singing in French. 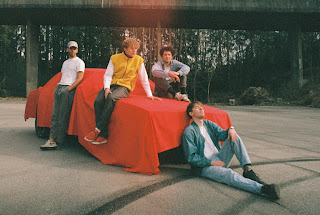 Earlier this summer, the Norwegian dream pop act MARBLES released a summery new jam called “Heading Out”, and now they are thrilled to share the music video, which makes literal the song’s theme of escaping city life for some much needed R&R in the splendor of nature. As the video’s protagonist (band member Ferdinand Windmer) leaves his stuffy office job and unveils the vintage car (seen above), his business suit is replaced with a superhero cape and he sets out into the open wilderness.

Hailing from Kolbotn, the black metal capital of Norway, the music of MARBLES sounds about as dramatically different from the stereotypical idea you might have of the music this nordic country tends to produce, with a colorful indie pop sound that bridges the gap between washed out guitar-driven dream pop ala Wild Nothing and Jay Som blended with the more upbeat and psychedelic pop of acts like Toro Y Moi and MGMT.  "Heading Out" is the first new MARBLES song following their self-titled debut album from 2020, and more music from the band on the way later this year

Describing their inspiration behind "Heading Out" and why they chose it as the first teaser of their new album, the band said that they hoped to encapsulate in the song the feeling of excitement and anticipation that comes with any time you get a chance to “head out” from the big city to escape; whether that be just a quick bike ride down to the river or a weekend-long camping trip. As they clarify, “It’s not just about the luxury of being able to travel, it’s about finding your own little precious moment amidst your normal day to day situation. Maybe even just in your mind and with your imagination! Being aware of a contrast between your everyday life and what you feel can be - and what you can do. Defining it is up to you.” 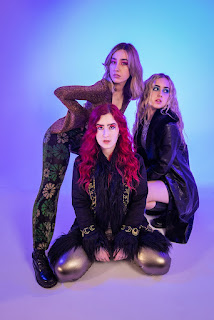 Little Quirks - All My Friends Are Birds.

Little Quirks is the family that accidentally became a band. Now they are sharing their brand new EP, Call To Unknowns, via indie powerhouse Glassnote Records. Predominantly recorded in their backyard in New South Wales, Australia, Call To Unknowns combines tales of myth and magic with effortless folk-pop songwriting that unashamedly brings catchy melodies and pounding rhythms to the fore.

Along side their new EP, they have also shared a brand new video for new single 'All My Friends Are Birds’. The track is a folk-pop anthem complete with footstoms, clapping and soaring harmonies, reminiscent of US folk-rock acts like The Lumineers and Edward Sharpe & The Magnetic Zeros. The sentiment of the song was inspired by Jaymi’s father, who has always likened birds to guardian angels. “We talked about how it’s easy to forget that there are always people supporting you behind the scenes, so I think this song is a really nice, comforting reminder of that,” she says.

The stunning music video that accompanies the track was filmed in Glenworth Valley, near where the girls live. Directed by Little Quirks, the film clip is a magical, mystical visualiser featuring Abbey, Jaymi and Mia plus friends wearing brightly coloured velvet capes of red or blue, dancing barefoot around a maypole and performing rituals. 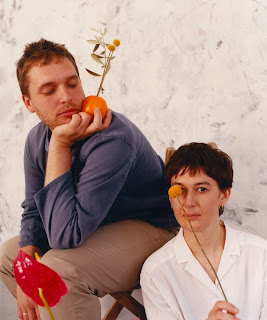 Full of digital sounds, drum machine and synth melodies cunningly sat beside rich, organic, acoustic instrumentation, it's a looping tug of war between everyday simple pleasures and existential dread, with “TV Dinners” highlighting one of the album's central themes, that of the privileges associated with modern domestic existence. Other themes on the album dive into the beautifully mundane as well as the pressures that come with technology, social media and climate change.

Lucinda says of the track: "”TV Dinners” was the only song on the album written during lockdown (the rest were written previous to Covid). I wrote it in about 20 minutes as a stream of consciousness kind of poem. Very literal. Even though, like a lot of people, I wasn't really sure what to do with myself under the circumstances, I was still really quite happy to have some time doing nothing - noticing the way the light changed in my flat and the sound of the birds and trees outside.

I felt a real sense of privilege that I was able to enjoy a space in time that for a lot of people was incredibly testing on so many levels. And with that privilege, a sense of guilt: "What once was bliss, becomes a certain kind of ignorance." We all take part in it in some way - you can change the channel if the news becomes too much, or steer away from doom-scrolling, and I think you should as a way of protecting yourself, but I also think it's important to recognize that its a privilege to be able to do so."