Fable is the mesmerising and powerful third album from South London based 4-piece The Little Unsaid, introduced via its first single Vibrant Life, an intense stream of consciousness reminding us not to lose momentum, imagination, and curiosity in these dark times.

The Little Unsaid have always evaded categorization, blending on the new record an expansive multi-instrumented post-rock approach to song structures; touches of jazz’s improvisation; an earthiness that hints at folk and roots influences: and a dramatic art-rock edge heightened by frontman John Elliott’s intense delivery (with a hint of the dramatic that nods to John’s other works as a composer for stage, with his music featuring in Cruise currently touring the West End).

The Little Unsaid’s incredible live energy (with the band having played countless UK/European tours and festival appearances, including a set at Glastonbury 2022), has been harnessed on Fable with the entire record being carved out of hours of raw live improvisation recorded during an impromptu visit to Dorset Mill Farm studio following a cancelled gig. As frontman John Elliott explains:

“Without pre-written material or musical ideas, we set up in one room and recorded long improvisions until the sun went down, seizing on the energy and positivity we found through playing again (post-lockdown). We had one rule: Every idea had to come to us in the moment; melodies, rhythms, lyrics.”

Fable’s lyrical themes capture this moment in time, described by John as “Songs which unavoidably reflect the chaos and simmering collective anxiety that was (and still is) everywhere around us while we recorded but held together by a defiant and palpable sense of gratitude and joy.”

Laure Briard - My Love Is Right.

‘My Love Is Right’ is a psychedelic pop/soul song about keeping faith in yourself and being confident in your love. It’s the first taste from her upcoming fourth album, ‘Ne pas trop rester bleue’ (due February 2023)

Warm piano and bass guitar set the tone of ‘My Love Is Right’ before a drum fill throws us into the verse, with Laure Briard’s vocals chanting; “I have to clean the bad vibrations, make everything ok”.

The song shifts gears with layers of strings, vocal harmonies, guitar and keys pulling us up into the self affirming chorus. Tasteful orchestral embellishments combine with vintage rock instrumentation, creating a symphonic pop sound. 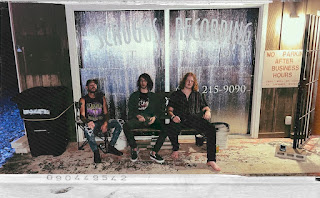 RoseWood - Fire And The Flame.

"Fire and the Flame" by RoseWood is a fire-y, almost sexy, rock song, with a quasi-indie punk vibe.

RoseWood are a three-piece rock band based in Middle Tennessee consisting of Caleb Wood, Kasen Johnson, and Mike Hicks.

They originally formed in 2020, and their debut single is "Fire and the Flame."