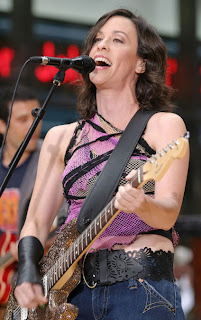 I am, I hope in my own small way, something of an advocate for some of the excellent artists that have come out of Canada and achieved international recognition.

Alanis Morissette is no exception, indeed as previously mentioned, she was absolutely fantastic when I saw her live in London some years ago.

So in order to address the balance here is a concert of Alanis from 1996.

This is from a CD boot that seems to have emerged from the Czech Republic on 'Oxygen' records.

The album title is 'Miss Thing' which considering that the CD back cover, claims to have 'art direction and design', makes me wonder about the creativeness amongst bootleggers in that part of the world, (anyway is is now digitized and free of charge).

This is Alanis Morissette live at the Melkweg, Amsterdam, Holland on October 17th 1996.

The set list is (I think) as follows - it is different to the CD cover, so much for 'design':

The material is good soundboard quality, and captures the energy and adrenalin of Alanis back in these heady days!

Anonymous said…
Thanks BC.

Anonymous said…
Thanks for this Alanis one. Curious to discover the artwork...

And thanks for the White Stripes one. Indeed very good that such bands are successful.

Anonymous said…
weird, recorded in milkweg and cropped up on a czech release.. something different anyway.. acoustics at milkweg?! thanx beehive, anth in canuckland
5 February 2008 at 01:27