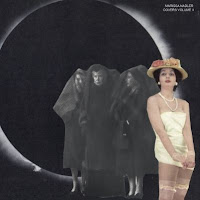 Background : For those of you who follow folk on Twitter, you may well want to add Marissa Nadler to your selection. In recent weeks she has given away a number of songs from her 'Covers Volume II' album, in fact if you check over there now you may well still be in for a rather nice treat. Covers Volume II follows her critically acclaimed self titled full-length out now on her own Box of Cedar Records. After releasing several albums with Kemado (and having one of her songs inspire the name for vinyl start-up Mexican Summer), Marissa Nadler ventured out independently for her critically acclaimed self-titled album, which has been featured on NPR "World Cafe: Next," NPR First Listen, Vogue, KEXP, Pitchfork 'Overlooked Records of 2011' with an 8.1 album review, and as one of SPIN's "5 Best New Artists for June 2011," among others. Marissa Nadler released her first album, Ballads of Living and Dying, on Eclipse Records in 2004; her follow-up, The Sa
Post a Comment
Read more
More posts