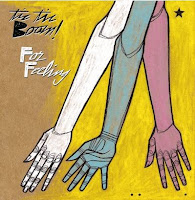 BACKGROUND: The Los Angeles synth pop duo Tic Tic Boom! is giving away the first single "For Feeling" from their upcoming EP Before the Sun Rises. The release, to be available in April, promises to be stronger, dreamier, darker, and a major evolution of their sound from their previous recordings. Before the Sun Rises, the band's third EP, follows on the success of their 2011 release  Reasons and Rhymes. Drawing inspiration from new wave, punk, and indie rock, their second EP received a wealth of praise and recognition from publications like Buzzbands LA, The Owl Mag, and CMJ, the last of which described their music as “hook-laced synthpop that casts live drums and guitars as conspicuously as it does sugary vocals and catchy synth loops.” It also earned the band the opportunity to do an official remix of one of the most popular songs of 2011, Foster the People’s “Pumped Up Kicks,” and an invitation to showcase at CMJ Music Marathon in New York. After a year of tirel
Post a Comment
Read more
More posts