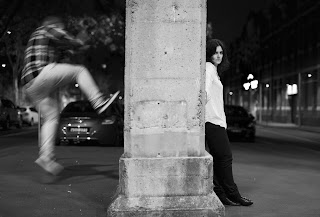 Winters End - Mayfair. Their Bio informs us of the following - Comprised of siblings Marissa and Christopher Pinto Winters End are a Sydney-based indie, electronic band. Formed in October 2011their follow-up release to their debut EP Staircase (2012) was their single Walls.  Released in July 2014 Walls received plays extensively by community radio stations Australia wide, and also received airplay on FBi radio and Triple M in Sydney. Walls continues to be played internationally in the UK, Netherlands, USA and Canada. Walls' success also saw Winters End invited to perform at two international music festivals in Canada and LA in October and November 2014. Winters End are back and ready for 2015. Their 80s-inspired electronic sounds encompass all tastes and all ages. Make sure you seize your chance to see this dynamic sibling-duo while they're back home in Sydney! They are undertaking a national tour between September and December.  This is a powerful and stirring song. O
Post a Comment
Read more

August 21, 2015
Buffalo Sunn - Told You So. Background - Five-piece Rock/Alternative band based in Dublin, Ireland,  incorporates sounds from the 60s, right up to the present day, mixing big reverb-laden harmonies with carefully placed guitars to take the listener on an epic journey. "Told You So" was produced by Grammy Award winner Pat McCarthy (U2, Counting Crows, R.E.M.). Their first single, "By Your Side" earned global airplay, which included over 450 spins at KKDO Radio 94.7 Sacramento. Performed at multiple festivals and industry showcases including CMW (Canada), Music Matters Asia (Singapore), Liverpool Sound City (UK), Glasgowbury (UK), Hard Working Class Heroes (IE), CMJ (New York), SXSW (Austin, TX) and the Passport Approved Tour (Los Angeles, Seattle, Portland, Phoenix, Sacramento and more) . I am pretty certain Beehive Candy included Buffalo Sunn in a feature a couple of years back, in which case they are consistently very good. This is one of those tunes that gr
Post a Comment
Read more

August 20, 2015
The Boxcar Boys - Hindustan (from the album - Cicada Ball). Background - The Boxcar Boys create their distinct, energetic and at times maudlin sound by weaving together a captivating bevy of folk traditions, Dixieland jazz and Klezmer performed with a good ole time New Orleans spirit. Their presence on the Canadian music scene over the last 5 years, including 2 full length albums Don’t Be Blue (2011) and Rye Whiskey (2012) has earned them a Canadian Folk Music Award nomination as well as a place on EJazzNews list of Best Canadian Jazz Bands. This Toronto based six piece is comprised of clarinetist John Williams, violinist Laura C. Bates, trombonist Karl Silveira, accordionist Kelsey McNulty, sousaphonist Rob Teehan and washboard player Justin Ruppel.   The band’s close-knit dynamic is clear on their third full length album, Cicada Ball which will waltz you across genres with whimsy and humour and dip you back in time. The title track of the album is a sonic interpretation of Cicad
Post a Comment
Read more 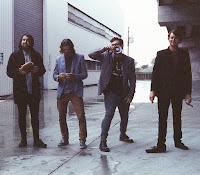 Luna Sands - Wake Me From Sleep. Background - Luna Sands began as a studio project in late 2012, and after reworking and refining their sound for two years, they have completed recording their debut album "Tales of Night” in 2014. The first half of 2015 has seen Luna Sands demonstrate their style of psych grunge across prominent Brisbane venues such as The Zoo, The Triffid, and The Brightside. Now they are releasing their third single ‘Wake Me From Sleep’ through Sydney based label The A&R Department. The song wake me from sleep was recorded in 2014 at Recording Oasis, Taliebudgera Valley, Gold Coast, as well as Alchemix Studios, South Brisbane. The song was produced, and mixed by Rob Sharpe, and mastered by DOMC Mastering, Margate, QLD. The song takes on the concept of dreaming, and being truly alive in our dreams. Front man of Luna Sands, Allen Ellis explained his inspiration for the song as: “In a place some call the dreaming, between the borderlines of the awake an
Post a Comment
Read more 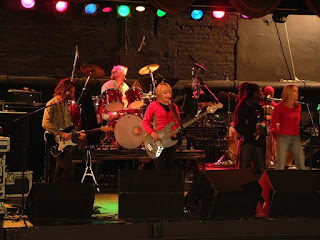 From the Internet Archive this is this Tom Tom Club live at Stella Blue, in Asheville, NC, USA. The band undertook a US tour in the fall (autumn for us Brits) of 2001, this concert was on the 25th September. Describing that tour their timeline states - 'The group tooled the East Coast from Maine to Florida, searching out the hip and the compassionate. They were not disappointed'. The tour was partly in support of the group's album, 'The Good, the Bad, and the Funky', which was released in 2000 and featured cover versions of Donna Summer's "Love to Love You Baby" and Lee "Scratch" Perry's "Soul Fire." One of the album's tracks, "Who Feelin' It," was also featured in remixed form in the soundtrack album of the 1999 film American Psycho. Among the musicians on The Good, the Bad, and the Funky are Jamaican singer Mystic Bowie, Charles Pettigrew and Toots Hebbert of Toots and the Maytals. The album's releas
Post a Comment
Read more

August 16, 2015
Trancescapes - Anima (from the album 'Gaia Sadhana'). Background - The members of ‘new age’ musical group Trancescapes view free and open improvisation as an authentic connection to the holistic nature of music for meditation.  Like great jazz or blues, free improv is best recorded 'live off the floor'.   Capturing the essence and magic that is brought forth spontaneously moment by moment, coloured by the musical influences and the unexpected developments of open-minded musicians, the music is as stimulating for the listener as it was while being performed live by the musicians. Welcome to the world of Trancescapes, whose debut album, ‘Gaia Sadhana,’  (loosely translated from Hindi and Greek words meaning ‘earth’ and ‘instrument’)  - is being released September 4th world-wide via Spring Hill Records. Recorded live off the floor on a magical evening in early 2015, the album is a collaboration with multiple Juno award winning singer - songwriter Bill Bourne leading a
Post a Comment
Read more
More posts